I went back to storage the other day and dug out two books of prints, most of which were unscanned.  There’s still at least one box of prints somewhere in there that I didn’t find, and I have no time to scan more of them, but here’s an interesting one I found. 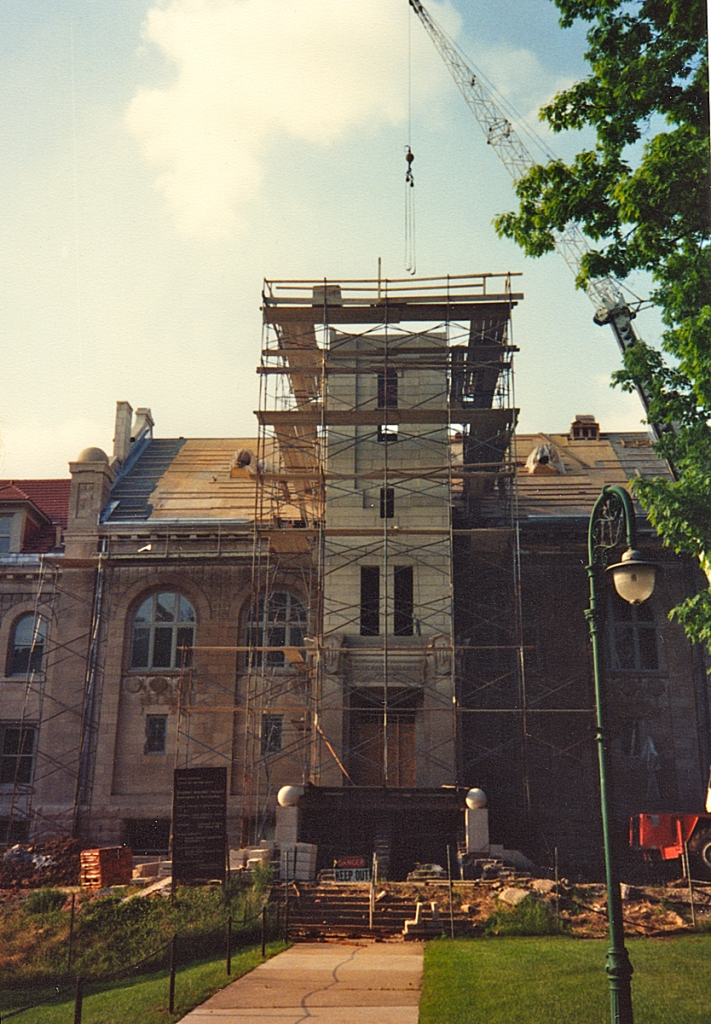 This is the Student Building on the IU Bloomington campus.  I can easily date this as the summer of 1991, although that’s perplexing because I didn’t live in Bloomington that summer, and I didn’t own a camera then.  That means I must have been in town visiting the person Ray refers to as “the za chick” (long story) and I must have been using her camera.

The Student Building was a total shithole when I was a freshman.  I remember going there for a meeting with some alcohol counseling group.  I was a militant non-drinker as a freshman, which I now realize was stupid, and I probably just should have drank everything offered to me, if only to take the edge off of the unfurling mania that kept me awake for weeks at a time.  But I had some vague interest in finding out about this group that sponsored all of these non-drinking dances and whatnot, and I met with them once and then probably got bored of the whole thing and shifted obsessions to learning all of the bass lines from the first four Black Sabbath albums or whatever.

Anyway, the meeting was in the basement of the Student Building, and at that point in 1989, the place was practically on the verge of collapse, and looked like an East German department store in the mid-70s.  There were flickering fluorescent lights, dark passages, plywood over walls, wires hanging from ceilings, and cracking plaster everywhere.  I don’t remember thinking anything about whether or not the place should be restored or preserved; I’m sure I just thought “man all of these buildings are old… hey, there’s a new Steve Vai album I have to memorize….”

The renovations were underway on the 1905 building in late 1990 when there was an electrical fire that December and the place burned down.  I often say “electrical fire” because it was a strange coincidence that the iconic clocktower building was shut down and emptied and just happened to burn, probably collecting a huge insurance check and an even bigger inflow of contributions from alumni.  Even more amazing is the fact that it takes roughly 8 years to fix a pothole in Bloomington, but they had this thing from gutted and charred shell to completed construction in roughly nine months.

That summer, I lived in Elkhart, but started dating the aforementioned girl over the Memorial Day weekend (20 years ago – jesus christ) and I came down to visit pretty much every weekend I could.  I’d just bought this VW Rabbit diesel, which got something like 50 miles per gallon, and diesel was a dime a gallon cheaper than regular gas, so I could make the 500-mile round trip on ten bucks of gas.  I worked at this copper and brass pipe fitting factory on second shift, and would rush home at midnight on Friday, take a quick shower, then drive into the darkness, cutting across the state on US 31, pulling into Bloomington just as the sun rose.  I missed the Bloomington campus so much during my year of exile up north, and deeply cherished the brief 48-hour visits to see the old limestone buildings again.

By the time I returned to Bloomington in 1991, the Student Building was complete.  Most of the building belonged to the Anthropology department, but UCS outfitted most of the second floor with the latest computer toys, and I spent some time there when I couldn’t get a spot in the IMU or Lindley.  I didn’t work there much as a consultant (most of my shifts were in the Library the fall semester, and all of them were in the IMU that spring) but some of my friends like Bill did.  I always dug the interiors of that building: high ceilings, those giant curved windows, and massive wood trim everywhere.  They mixed that 1905 elegance with 1991 high-tech, with a whole room of NeXT workstations and color printers and flatbed scanners and dual-monitor Macs.

I remember spending a lot of time playing with this brand new program that just came out the year before, called Adobe Photoshop.  The 1.0 version was pretty rough, but let you take GIF images and alter them, changing colors and editing details and doing stuff that people used to do with razor blades and paint.  Today, every single picture we see online is photoshopped, but in 1991, this was still the stuff of science fiction.  Terminator 2 had just come out in theaters, and the idea of CGI and digital effects was brand spanking new, but here I was in the middle of Indiana, surrounded by machines that could do the same damn thing, free for me to use (provided some dork wasn’t parked there using a $10,o00 computer to chat on the VAXPhone to the person two rooms away.)

I spent a lot more time in the Student Building in the 1992-1993 school year.  I briefly had a second job with the UCS education department, helping teach the JumpStart classes, which were these free “WordPerfect in 60 minutes” sort of things.  They also taught these longer seminars on a fee basis to other departments, so if you needed all of your office workers in Parking Enforcement to learn DBase, you paid a few hundred bucks and sent everyone off to a three-hour class.  A lot of these were taught in the Student Building, probably because it was easier to reserve a block of computers for a half day.  I never taught these classes, but was always the assistant, meaning when someone fell behind during a lecture, I’d run up and guide them through the lesson.  I also did all of the pre-class stuff, like going around and wiping out and restarting Quattro Pro on 38 machines, or setting up template files from a server.  It wasn’t exactly my calling, but I was desperate for hours, and that gave me shifts.

The Student Building gradually lost that New Building Smell, and those cutting-edge NeXT machines quickly became boat anchors and eventually got replaced with a cluster of SGI workstations.  (“Wow!  These are the same computers they used to make Jurassic Park!”)  But that building, and all of the postcard-picture scenery in the old crescent of campus, always reminded me of that idealistic summer of 1991, when I so desperately wanted to be back, and the fall of 1991, when I finally made it.

One reply on “Thoughts on a random picture: The Student Building”

I loved the Student Building, and spent a lot of time there, both in class and using the $10,000 machines to VAXPhone random boys. :P