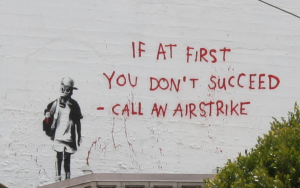 On Memorial Day, we decided to run into “the city,” although I hate sounding like one of those bridge and tunnel types that refer to San Francisco as “the city,” because I happen to actually live in A city, but not THE city.  (More annoying than this: the show So You Think You Can Dance recently held auditions at the Paramount Theater here in Oakland, this big, old-timey, restored grand theater, and in every narrative and establishing shot, they went on about “The San Francisco Auditions,” and showed b-roll footage of the Golden Gate and trolley cars and whatnot.  It would not have killed them to actually say they were in Oakland, especially when you’re a bunch of white-bread TV execs trying to look “urban.”  Anyway.)

So the goal of the trip was to go to City Lights, which I have not been back to in a long time.  And in thinking back, it turns out it was 15 years ago, to the month, since my first visit to San Francisco, and my trip there.  I wrote about this elsewhere, in an old issue of AITPL, and the basic rundown is that I was in San Jose for this trade show, working at my first job in Seattle, and I had pretty much an entire day off , and no plans whatsoever.  I loved being in California, loved the weather and the smell of the air and the sunshine, but schlepping around a convention center in a stupid logo-ed polo shirt, handing out CD-ROMs (remember those?) and software to people during the not-yet-burst internet bubble wasn’t exactly the way to see the Bay Area.  Walking back to my hotel, I realized they had a little rent-a-car desk off the main lobby.  Then I realized I was now 25 and had an Amex gold card in my wallet, which meant I could, for the first time, rent a car.  20 minutes later, I’m jetting north on the 101, headed for this city I barely knew, only a rental car map in hand, no GPS, no addresses, no plans, no google on a phone, just a vague idea that the center of the Beat universe was somewhere on Columbus street.

I have no idea how I found the place back then, but I did, and I was in the very same building where Ginsberg read Howl, where Bukowski’s short story collections were published, where every Beat poet wannabe aspired to be shelved.  It’s not a huge store, and back then, it wasn’t that overwhelming.  I mean, you’ve got this Kerouac street outside of it, and So I Married an Axe Murderer, a movie me and Simms and gang memorized in the mid-90s starts and ends in that alley.  But in 1996, there were plenty of great book stores around; I think there were a half-dozen great stores the same size or bigger within five miles of my old Seattle apartment.  I did buy an issue of Cometbus, the first I’d ever read, and wished I had the cash and luggage space to buy a dozen other things.

I figured the city would be jam-packed with tourist types, but after we crossed the perpetually-under-construction Bay Bridge and its doppelganger 21st-century twin, traffic was spectacularly light.  After cutting through a completely vacant financial district, we found a street parking space on a hilly part of Columbus, something I’d only expect to see after a total nuclear holocaust.  Of course, there was no indication as to the meter situation on the holiday, so we risked it, and of course got a ticket.  But still, it’s the thought of a street parking space for free that counts.

I remember eating at some eclectic fusion-y diner restaurant with toys spray-painted gold and glued to the walls, maybe called Icon back in 1996, and I’m sure that’s long gone.  We ended up at some odd 70-year-old sandwich shop for lunch, a place covered with Pittsburgh Steelers stuff.  The sandwiches were made with both fries and coleslaw on the sandwich, which I did not really like, but they did have some awesome onion rings.  This was, unfortunately, one of those carb-heavy meals I can’t really deal with anymore, and within an hour, I was pretty much ready for sleep.

We went to City Lights, and it looked remarkably like it did back in 1996, and probably like 1966, except for maybe the computer registers, and swap out all of the purple-type mimeographed zines for photocopied ones.  It looked smaller than I remembered, but the selection was still astounding, and I instantly found a few dozen things I wanted to buy. There is the issue, however, that I’m running out of storage room, and I’ve got a queue of at least a dozen books on the to-read pile already.  But who cares.  When they film my episode of Intervention, I’m going to have a couch full of family members and that bitchy old lady counselor yelling at me about my private library hoarding, and I’m fine with that.

But my general attitude on the beats is somewhat varied now.  In 1996, I was just recovering from the near-terminal case of student poverty, and dropping every spare dollar I could find on building my book collection.  I still didn’t have the complete collection of any of my favorites: Bukowski, Kerouac, Henry Miller, Burroughs.  Now, I’ve got most of their bibliographies on the shelves.  Some of them have estates that are still trickling out the occasional volume pieced together from scraps, or re-re-releases of “complete” works that would require me to re-buy yet another copy of a favorite book.  On the other hand, there are a lot of biographies and scholarly deconstruction books coming out as more generations find out about and study these original tomes.

The big problem is, I’m trying to avoid writing like these guys, and that generally means avoiding reading them.  I always love to go back and re-read On the Road, but within 50 pages, I’m either thinking about some grand road trip, or trying to re-spin pieces of my own past into some epic novel, and I eventually hit a wall there, thinking that either my own life is too boring, or I don’t find it within my wheelhouse to do something like that.  It’s not entirely my style, and I’d rather be writing something more bizarre.  But I do like to dip back into the stuff every now and again.

I ended up buying a copy of Raymond Federman’s last book, and two newer issues of Cometbus, which are now sitting on the pile.  We ambled out and drove around the city a bit more, and I still don’t entirely feel like I live here, but I feel an urgent need to consume as much of this as I can, because every time I leave a city, I realize how much I didn’t do there.

And even though City Lights was one of many book stores back in 1996, now it’s one of few.  There are zero book stores in West Oakland, and exactly one within a five-mile radius of my house, a Barnes and Noble which will probably shutter in the next two years.  There’s a healthy number out in San Francisco, but they’ve become rare.  I buy a lot of stuff online, so I’m responsible for their death, but I do miss the energy given off by large rooms of new books, and love a place that’s more than just clip-on book lights and mass numbers of covers-out Twilight and Eat Pray Davinci Girl in the Dragon Tattoo books.

What a great read.

And I did not know about the last scene in So I Married an Axe Murderer. See? THAT was why I got up today. :-)

I remember in 1996 that I went down that little alley where Jack Kerouac way is and went in the restaurant shown in the movie to get a drink, and was bummed that the actual place looks different than the cafe where Mike Myers read the "Woman/woMan/wooo-maaan" poem. I did not try to find the butcher shop – I'm sure it's now a cupcake bakery or a Starbucks.