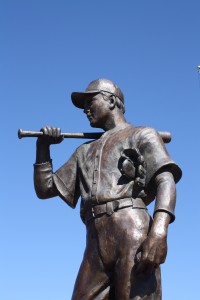 1) PNC Park, home to the Pittsburgh Pirates, was built on what was later identified as an American Indian burial ground belonging to the Shelmikedmus nation. Since its construction, the Pirates have not had a winning season.

2) No player in history at the major league level has had the middle name Xavier.

3) During the filming of his PBS documentary about Baseball, Ken Burns pitched 12 games under the assumed name of George Johnson for the High-A Myrtle Beach Penguins. In 22 innings, he gave up 67 runs and pitched only seven strikes.

4) Hunter S. Thompson worked as an assistant machine operator at the Louisville Slugger factory when he was a teenager.

5) Manny Ramirez did a series of Rolls Royce ads in Japan between the 2007 and 2008 seasons, which can be found on youtube.

6) Under the current MLB Player’s Association Collective Bargaining Agreement, any position player on the 25-man roster of any team is allowed unlimited access to any American Airlines Admiral’s Club lounge in the continental United States.

7) The size of a regulation baseball (between 5″ and 5.25″) was originally set because it was the diameter of an average cow’s kidney.

8) Johnny Damon’s great-grandfather was the first person to buy a Model T Ford in Thailand.

10) The Colorado Rockies have an alternate home jersey specifically designed for playing in snow. It has a pullover hood, full-height boots, and a parka top. It’s rarely used because it impedes pitching motion, but they were most famously worn in game 4 of the 2007 NLDS, in which it snowed over 27 inches during 9 innings of play.

11) The MLBPA blocked negotiations in 2004 that aimed at moving the Montreal Expos to Havana, Cuba. The biggest issue was complications with obtaining work visas for players who had previously fled Cuba for the US.

13) There is no specific rule banning the use of human-animal hybrids as baseball players, although it’s rumored that the owners collectively came to a gentleman’s agreement limiting their use during the 2006 off-season owners’ meeting.

16) In 1986, George Steinbrenner explored the possibility of a ban on facial hair for all fans attending games at Yankees Stadium, but his legal staff eventually convinced him this would not be feasible.

17) Janis Joplin’s younger brother Mike was the bullpen catcher for the Houston Astros from 1971-1973.

18) Billy Martin was the celebrity endorser for Excalibur crossbows in 1981.

19) There have only been two times in baseball history where a position player who was pitching was hit by a pitch during an at-bat, had the game interrupted before they took first base, and then appeared pitching for the opposing team during the makeup game due to a trade in the time between games.  This is the only situation in which a player other than a pitcher can have their own walk credited against them.

20) After becoming a vegetarian, Prince Fielder killed a goose with a line drive at a road game against the Florida Marlins, and refused to eat the dead bird.  This was the first time a player has killed a bird during play and not eaten the carcass, which is a secret tradition held among most omnivorous players.  This dates back to an infamous incident at Bennett Park in 1911 when Ty Cobb killed a homeless man with a baseball bat and ate his left arm during the intermission between two games of a doubleheader against the White Sox.

4 replies on “20 Facts About Baseball You Didn’t Know”

A interesting article but I'm wondering about that Colorado uniform for the snow, are there any sites with some pictures of sed jersey?

It's possible I may have made up at least one of the facts in this list. :)

Please don't let the Randy Johnson thing be made up.