I get a lot of shit for the “museum of obsolete technology” I have in our storage locker right now, the electronic toys I’m paying $30 a month to not see.  But I’ve pared down almost all of that inventory now, and it’s down to a single C-64 and 1541 drive, and a Sony Magic Link PDA that I bought on eBay and will probably never be able to connect to the internet.  I’ve given up on collecting, but I’ve still got that collector’s gene, and if I had unlimited space and unlimited budget, I’d probably spend all day and night on eBay, trying to buy back every piece of electronics I ever owned and every gadget I ever coveted, until eventually the hosts of Hoarders showed up at the house to film a two-part special on me.

I found this site a while back called Wishbook Web, and it’s extremely dangerous for me.  It’s scans of a bunch of department store catalogs, like Sears and Monkey Wards, which is great, because those things have largely been landfilled and there’s no archive of them anymore.  When I was a little kid, I would spend the entire year memorizing these catalogs, poring over the toy sections until the pages fell apart.  I guess now kids can just get on the web and go to Amazon and look this stuff up, but I would scrutinize these things like a NASA engineer trying to figure out why the latest Mars lander crashed.  Me and my sisters used to fight over who got to read each catalog, and instead of wish lists, my parents tried to institute some kind of system for us to denote what stuff we wanted that year.  It involved one of us putting boxes next to things, and the other annotating with circles, or maybe it was stars.  Anyway, I’d just mark the entire Lego section and any single thing that said Star Wars in it.  And of course, all new toys had come out before the actual holiday, and we’d have to revisit our greedy little lists based on the commercials shown during the Saturday morning cartoons.

So at least two of these catalogs came out during the prime of my childhood, and I can still tell you almost every damn thing on every page.  Going back to these again is like going back to a home town after twenty years and still being able to find your way around.  It’s also interesting to see how much the times have changed as far as copy goes, because I could write better stuff in my sleep.  Anyway, when I first found this URL, I went through every page, trying to find the stuff I used to own, and the things I really wanted but never got.

Here’s a good example of this: the stereo I had as a kid. 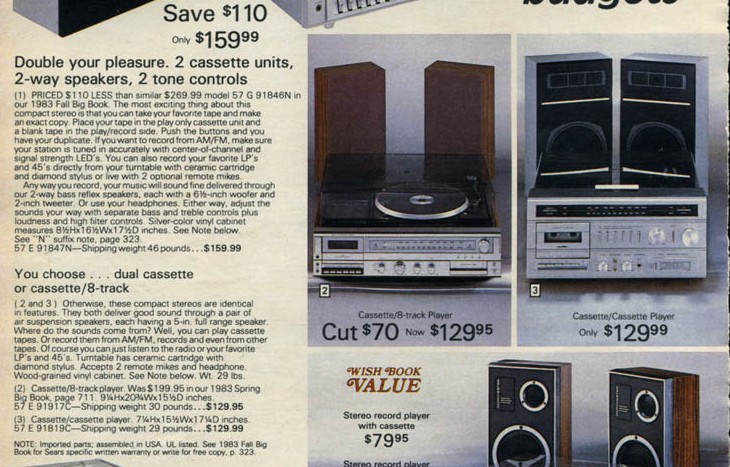 When I was little, I had one of those crap record players with the removable lid and the plastic handle on the side, the kind with the speaker built into it.  My parents had a “real” stereo record player with separate speakers, but I had to listen to my read-along books and Disney records on this orange cardboard piece of shit.  When I was in maybe the 6th grade, I asked for a “real” stereo for Christmas, and I got item #2 from the picture above, taken from a Sears catalog.  And at the time, this was about as technologically advanced as the computers from Minority Report.  It had a record player AND a tape player AND a radio AND an 8-track.  Not only could I record songs off of the radio, but I could make tapes of albums.  And the speakers were separate, the kind of thing you plugged in and sat on shelves in the corners of the room.

The 8-track was a bit of an oddity; this was like the last death rattle of the failed format.  This stereo had a front-loader, and it had the program button, which jogged the tape heads sequentially across each of the four tracks of an album.  But it didn’t even have a fast-forward or rewind button.  Our family had no 8-track tapes, so we went to the Sears at Pierre Moran mall, and found them liquidating the remainder of their 8-tracks at some ridiculous price, like maybe four for a dollar.  These were all “cut-outs”, items with a groove cut in one side because they were returned or whatever, and they were pretty picked over.  I think I ended up getting a Steve Martin comedy album, a Ringo Starr solo album (I had no idea who the Beatles were, except in the most conceptual of terms), and a Jefferson Airplane album.  Much later, my mom’s second husband had a collection of a few 8-tracks, with the only notable ones being the first Cheech and Chong album, and Jethro Tull’s Thick as a Brick.  (Albums with only two side-long tracks didn’t work as well for a format where an LP was essentially divided into four; I’m not sure how they handled that.)

I had almost no budget for music, so I spent a lot of time trying to record songs off the radio, which was a maddening process.  I’d listen to U-93, the local top-40 radio station, and hope some song I liked would get played.  There were a whole slew of problems that would occur: the tape would not be queued to the very end and I’d erase some previously recorded treasure; the idiot DJ would babble on about being the 93rd caller for a set of free tickets to a monster truck rally; I wouldn’t recognize the song until 30 seconds in, and then only record half of it; the song would fade into some other stupid song I wouldn’t want, and I’d have a pristine copy of this Journey song I really wanted, except the last ten seconds would be fused to the beginning of a Toni Basil song.  (Yes, that song, which I won’t even mention by name or it will be stuck in your head forever.)  It would take me maybe a month or two of diligent listening to fill one side of a C-90 with useful tunes.

The big shortfall to this new hardware was that it only had one tape deck.  Most of the new stereos coming out had two decks: a play-only unit, and a player-recorder.  And my unit was a “closed” system, without an AUX input or any sort of input jacks.  Most of my friends would buy their albums on cassette tape, and I had no way of making copies of them.  My best hopes were either to have a friend that had a dual-tape deck who would be willing to make a dub for me, or find someone who bought everything on vinyl and would let me borrow their album.  Another problem was that I had no way of recording from the TV.  I watched an insane amount of MTV back then, and I would have given anything to capture some of their new music on cassette for repeat listens, especially since they played much cooler stuff than the behind-the-times station in my redneck Indiana town.  I remember trying to record a Genesis concert off of MTV by holding my sister’s little jambox up to the TV cabinet, which worked about as well as taking a picture of the night stars by dragging a photocopier outside and making a copy with the lid open.  (My sister later tried recording some song on MTV – that “don’t put another dime in the jukebox” song, and every time it would come on, I would yell at the dog and she’d start barking, totally screwing up the recording.)

It’s always interesting to me how we have such a tactile nostalgia for old technology like this.  Like I’ve got an old cell phone sitting on my shelf, a Windows Mobile phone I used for maybe six months before I wised up and got an iPhone.  And I hated that phone at the time, but it was my daily driver, and I used it constantly, for email, google maps, web browsing (or what approximated web browsing in a crippled version of pocket IE).  And I pick it up now, and its heft, and the feel of its keys, and the glint of its display remind me so much of that period in late 2008 and early 2009 when this thing was permanently attached to my hip.  And I get some of that when I look at pictures of old technology like this.  I remember the smell that stereo had, the new electronics smell of components heating up for the first time.  I remember the snap of the silver knobs going across their detents as I cycled through the inputs.  I remember playing with that tuning knob endlessly, trying to get a clear signal on WAOR so I could record Dr. Demento on Sunday nights.  I haven’t seen this stereo in at least 25 years, but I think if I found one at a garage sale, it would instantly transport me back to 1983 again.

Anyway, that’s my story.  Now I must go waste the rest of my writing time finding this stereo elsewhere on the web.  I’ve just found there are a ton of eBay sellers with demo videos of their wares on youtube, with many similar stereos.  Not sure which is worse, the waste of money and space hoarding this stuff, or the waste of time finding it.

I feel your pain. I've got a problem with books. I don't like to throw them away and they seem to reproduce at will ;-)

I HAD THE EXACT SAME THREE 8 TRACK ALBUMS.

I also had a number of others BUT I HAD THE THREE THAT YOU MENTIONED, out of maybe eight.

I remember on the Steve Martin 8-track he talked about a cat wearing handcuffs. They probably had some sort of closeout of those albums or something. very very strange.

The one thing I remember about that Steve Martin 8-track was there was some visual gag that caused the audience to bust out in laughter and applause for like five minutes straight, and I never figured out what the hell it was. I've always wanted to hunt down the video of the same show and see what stupid face or impression he did, but I'm sure if there is a video, it's from another night or something, or they edited it out.