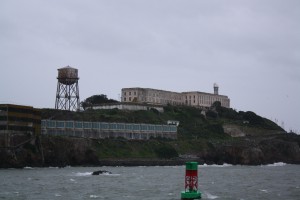 Last night, we took the night tour at Alcatraz.  The night tour is the best time to go; it leaves the dock at about 6:45, and they have more tour guides there, plus you get to see everything at night, or when the sun’s setting, which lends to some amazing views.  Unfortunately, we went during some horrible weather.  It was like 47 degrees, pouring rain, and extremely windy, and it got even worse when we were on this little clump of rock in the middle of the bay.  It’s hard to get tickets to the night tour, and we ordered ours months ago, so we bundled up and decided to power through it and go anyway.

Most of the tour itself is indoors, but we couldn’t spend any time wandering around the island itself.  Also, you get there at a dock at the low point of the island, but the cell block itself is at the top of the island, which means you have to climb up a steep switchback trail that’s the equivalent of hiking 13 flights of stairs.  And maybe that would be a decent workout, but not when you’re soaking wet and cold and being blown sideways by gale-force winds.  Even when we were inside, winds and rain whipped through the giant barred windows.  It’s not a climate-controlled resort, and you appreciate how miserable it must have been to do time there when the weather’s this bad.  And you know six months out of the year, it’s going to be this downcast at night.

The cellblock itself is a lot smaller than I imagined.  It’s really only four rows of cells, with one, the solitary wing, having cells on only one side.  I think the maximum number of people they ever had there was about 300, which was the size of our tour group.  There’s a library, a cafeteria, a control room and warden’s office, and not much more.  I guess there were some other buildings, like a place where they did work duty, but the other stuff was either closed off or is long gone.  A couple of the buildings burned down during the Indian occupation, and a couple were torn down when they were on the verge of collapse.

There’s also an apartment building, where workers lived, some with their families.  I never realized that kids actually lived on the island, and took a boat to school every day.  That seems unusual – now, nobody lives within miles of those supermax prisons, like it would be an amber alert field day, or a steady supply for hostage situations.  But I guess the families liked the small-town feel and the fact that they looked out at this incredible view of the city.

I wish I could have seen more of the history of the place.  It’s like New York City in the sense that it’s many-layered, hundreds of years of stuff built on top of other stuff, going all the way back to when it was a civil war fort.  There are areas that used to be moats and sally gates, and buildings built on top of the foundations of other buildings.  I guess when you have to haul in all raw materials, you tend to reuse things.  They tell the story of this at the various exhibits, but I wished it was a clear day so I could get some more pictures of this construction.

We also stayed for a presentation about the myths of Alcatraz, where they talked about how most of the stuff you see in movies is total bullshit.  Like, the whole system of tunnels under the island in The Rock does not exist.  And the myths about the man-eating sharks and impossible swim to the mainland are also just myths.  There are no sharks in the bay (other than little bottom-feeders), and a good swimmer could make it to the shore.  But if you spent your days rotting in a tiny cell with no exercise and no access to a YMCA pool and a daily diet of bulk-up powder, you probably couldn’t.

The trip was very cool, but it was photography hell, because of the low light and moisture.  The trip back was also not optimal – the ship was pitching and bobbing every which way, and water was splashing up over the boat as we crossed back.  I wasn’t sick, but a few people were, which wasn’t pleasant.  Anyway, I’ve posted the pictures to flickr here: http://www.flickr.com/photos/jkonrath/sets/72157626183337637/