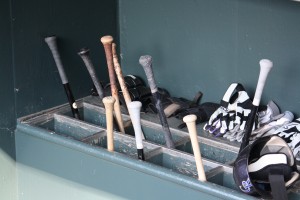 Forget Libya.  Forget work.  And forget anything you normally ignore, like family, friends, or the federal agents who have been sitting outside your house in an unmarked Crown Vic for two weeks. It’s time for all of us hardcore baseball fans to become obnoxious assholes and statistics wonks and get ready for The Draft.  Pitchers and catchers have reported to spring training; every lard-assed 5′-11, 330-pound designated hitter has declared that they lost between 30 and 50 pounds this off-season, which drops their body mass index from morbidly obese to obese.  It will only be a matter of time before you are eating $8 hot dogs and drinking $10 beers (unless you are a Phillies fan, in which case you will be vomiting $8 hot dogs and $10 beers onto the kid sitting in front of you.)

You have only matter of weeks to spend untold amounts on every Bill James-related annual book of figures and memorize a decade or more of two dozen statistics for a thousand players (minus the 40-man roster for the Pirates, because seriously, you aren’t going to pick a single one of those fuckers, especially when they’re playing for Clint “every plate appearance is a bunt opportunity” Hurdle.)  Time to try to remember how to calculate the career park-adjusted average cup adjustments per plate appearance (CPAACAP) and why it’s important when picking your second-string utility players.  And don’t forget you’ll need to go to all of the baseball reference sites to argue if MLB rule 7.08 (a) (1) applies if a batter reaches first base and then gets abducted by aliens, which would obviously skew a century of statistics on baserunning.

To some of us, the fantasy baseball draft is more important than Jesus, as it should be.  Because if you’re right about Jesus and the second coming and you’re one of the 16,000 who goes to heaven, it doesn’t mean shit if you aren’t able to rub it in the faces of your friends who get left behind.  Most of the appeal of fantasy baseball, aside from the ability to burn man-years of work at your desk while appearing to actually do work, is its power to humiliate and denigrate your peers when you win a bullshit statistical category like steals or saves by stringing together a bunch of has-been bench players who barely made the team in Kansas City, while your friend who got A-Rod in the first round of the draft gets to mope through the first two months of the season while he is benched for ‘fatigue’.  This is why it’s important to get the edge, to figure out ways to dominate the competition, and how to ridicule your friends by taunting them with pictures of multimillion dollar a-list players with genitals crudely sketched near their mouths and/or anuses in Microsoft Paint.

I’ll cut to the chase.  Here are a few things to keep in mind as you get ready for the draft.

Hopefully, these tips will help you form an iron-clad strategy for survival.  Let me know of any other strategies you may have developed, and I’ll see you on opening day.