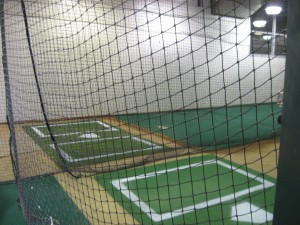 Not my house. This is actually at AT&T park, but it could be my house if I bought enough stuff (and did steroids.)

I almost bought a baseball pitching machine yesterday.  Well, not really, but I sat in this sporting goods store in Emeryville – Sports Annex or Sports Center or Sports Fucker or something, I pass by it every time I go to Taco Bell, but I never go in there.  Actually, I went in there once and bought a Matt Holliday shirt, an Oakland A’s Holliday shirt, and about five minutes later, he got traded to St. Louis.  And I bought the shirt in a Large, and of course I washed it once and now it’s too small to fit one of my cats.  Also, I don’t go to Taco Bell anymore, or at least I haven’t since the start of the year – one of those resolution things, one of the only ones I’ve kept so far.

I went to the store to buy a set of ankle weights, the adjustable kind where you can take out little iron cylinders in half-pound increments to change the amount of weight.  They look like little ammunition bandoleers, or the kind of weights you’d put on a body before you threw it in the East River. This exercise thing is not a new year resolution thing, by the way.  My chiropractor keeps giving me different exercises I am supposed to be doing and now I’ve brought ankle weights into the equation, because the natural weight of my feet is not enough, I guess.  It’s ironic that I’ve spent all this time and money losing weight, and now I have to go buy some more.  Maybe that’s not ironic; maybe it would be ironic if my father was killed in an accident with an ankle-weight truck and my leg was messed up from a childhood without a father.  Maybe I can pitch that as a sitcom idea.

(My new year resolutions included re-joining weight watchers to lose ten pounds, which I did (the joining part, not the ten pounds part); not eating at Taco Bell, which hasn’t happened yet in 14 days, although I drove past it to get to the Sports Fucker; and writing a book every other day, selling so many of them that Stephen King calls my house crying like a little bitch because I’m selling so many damn books it’s making him look like the literary equivalent of Battlefield Earth, and then optioning the book to some big studio, and in the movie, the main character alternates between weighing 135 pounds and like 250 pounds of pure cut muscle, and Christian Bale would play the role and would totally gain and lose all of the weight; or if I can’t write a book that sells like two million copies, I want to write one book that’s 180,000,000 pages long and sell two copies. (This may involve moving in the margins or having some artwork or changing the font or something.) I am not on track for this last resolution.)

So I get to the Sports Fucker or whatever it’s called, and this place is pretty huge and I’m always surprised, because they sell fishing gear and golf stuff, and have rowboats and canoes and fishing licenses and an indoor golf driving range.  And it’s arguable that either fishing or golf is a sport, because both of them are essentially modes of transport (boats, walking) along with some arm motion involving some kind of metal or wood stick, plus a lot of waiting, and both of them are excruciatingly boring to watch on TV unless you’ve taken a lot of pain medication and/or hallucinogenics first, in which case they are absolutely fucking fascinating to watch. Oh, they both also contain attire that is largely not required for the activity, but that is so distinctive that if you wore it to work, someone would say “hey man, looks like someone is going fishing|golfing today!” or “what kind of fucking idiot wears a fishing hat|golf cleats in an operating room?”

This place also sold a ton of baseball equipment: catcher’s gear, bats, balls, gloves, shoes, shirts, socks, supporters of the athletic sort, protective gear ensuring the future generations of baseball fans and players are not cut short by a line drive to the junk. And they also inexplicably had radio-controlled helicopters in the baseball section, those little ones you get for thirty bucks at Brookstone, charge up the batteries for 20 minutes after installing $97 of AA Duracells, and then promptly fly the thing into a wall in under ten seconds.  But I mostly looked at all of the baseball stuff, and wished it was baseball season, and wondered how many days it would be until I was listening to a Rockies game on my iPhone again, cursing the O’Dowd brothers for spending too little money on the bullpen and counting the number of games the Dodgers or Giants would have to lose for us to move up a spot in the NL West.

I have one of those RC helicopters, by the way – I got it this xmas.  I’ve been having a lot of fun flying it in the loft with the 19-foot ceilings, although my cats would disagree.  My helicopter is on its last legs, with a bunch of cracks and chips and dings and dents, but it’s still flying.  It’s an essentially stupid hobby, because you charge the thing up and then do a couple of loops around the room, and that’s it.  There are no heat-seeking missiles or water cannons or onboard WiFi cameras or anything else.  You can’t do loops like Airwolf or drive it to work instead of sitting in traffic on the 880, cursing the day you bought a tiny Toyota that has a windshield lower than the trailer hitch on most Hummers.  But I spend all day googling sites looking at bigger helicopters, and I could easily spend another five grand on an elaborate model with ten channels and two cameras and photorealistic details, and then fly that into a wall in ten seconds.

So I’m looking at all of the stuff in the Sports Fucker, and speaking of new year resolutions, they have an insane amount of workout gear aimed at the market segment referred to as “people who buy gimmicky crap with pictures of that dykey woman from Biggest Loser on the cover, thinking they will use it ten times a day and look like some UFC dude that bench-presses small-block Chevy engines (and not the lightweight aluminum ones they put in Corvettes – the iron ones with all of the extra emissions control crap that makes them weight like twice as much and probably doesn’t do dick for the environment anyway, but this is California, so like what the fuck) and then use it once and put it in a closet.”  But I obsessed over the baseball stuff, the specialized bat affixed with some kind of tension band things with Derek Jeter on the cover that you are supposed to use to improve your swing, and the stupid titanium necklaces with Derek Jeter on the package that is supposed to increase your sports stamina, and the space-age grip tape with Derek Jeter on the package that is supposed to magically increase your bat speed, and the convoluted forearm brace with Derek Jeter on the box that is supposed to keep your arm muscles aligned so you can throw a baseball four thousand feet.  I last played baseball in the pee wee league, and it didn’t work out so well for me, so I’m not up on the advances in stupid K-Tel crap that is supposed to help your game.  The closest thing we had to any of that was maybe some a cup, and nobody would let their kid wear a cup because they didn’t want them to become a pussy.  Now, pee-wee leagues require kids to be encased in solid lucite with metal corner protectors like one of those anvil road cases for guitars, which doesn’t matter, because in the pee-wee leagues they are not allowed to use a ball or keep score, and everyone is a winner.

I suddenly got the idea of buying one of those things where a pitcher pitches at it, and it has a strike zone on it, and it returns the ball back to you, and then buying a pitching machine, and aiming it at that, and essentially creating up a perpetual motion machine that just pitched an endless batting practice all day.  And that itself is boring, but if I also got the helicopter, and flew that while there was the random obstacle of baseballs flying past at 60 MPH (90 MPH if you used their stupid plastic ball), that would be like creating my own asteroid field to fly through, not unlike Empire Strikes Back, unless George Lucas took that out of the new BluRay version and replaced it with a stupid musical number, which sounds about right.

But I didn’t buy the pitching machine, or the pitching target with ball returner.  Like I said, it takes an incredible amount of effort to not hit the wall with the chopper, and an even larger amount of effort to a) watch golf, b) buy some resistance bands or a yoga mat without Jillian Michalses butch face on the box, perpetually screaming at me for eating a piece of cake back in 1974 and c) not go to Taco Bell and order every single thing on the menu except for the new Cantina Tacos, because seriously, who eats that shit anyway?  So I had to get the hell out of there fast, and I got a set of ankle weights with some other random aerobics/yoga looking model on the box, probably made in China by indentured servants arrested for their Falun Gong involvement. They don’t give you much of a workout, but they make a formidable weapon, which I will need when Stephen King shows up at my house giving me shit about how my book Robot Kim Jong Il and the Fist Fuckers of Doom should not have sold more copies than Full Dark, No Stars and I punch him right in his Boston Red Sox loving face.