I have a printout of some random PDF that illustrates twelve stretching exercises I am supposed to do to prevent repetitive stress injury.  I never do them, because I always forget, but that’s not the point.  The point is, the people illustrated have no faces.  They have ears, and you can tell from the side view that they have noses, but you can’t see the noses from the front view.  There are no eyes, no mouths, no nostrils, and no holes in the ears.  One of the exercise guys is wearing a tie; the other ones are pitiful fucking slobs. One is either wearing a skirt or the kind of baggy shorts you see in the NBA, or that a hesher wears.  I suppose it could be a kilt, and the person has short hair, so they are probably not a metal dude.  Two of the illustrations are wearing a wristwatch; the others are either too poor to own a quality timepiece, or they use their cell phone to tell the time.

I’m almost certain that back in grade school, we had some workbook or set of ditto worksheets that had similar line art people, probably either showing how damn great it was to recycle your pop cans (i.e. soda cans, this was Indiana) or how we should all work well with others, lessons that were mostly lost on my schoolmates.  I don’t remember if these people had faces or not.  It was the seventies, so I’m sure they also mixed it up with a token amount of men and women of various races.  I do remember this was the era when the “he” pronoun was falling apart, when they would alternate using “he” and “she” in every other example, as if that made things better.  It was better than having to use “he and/or she” every time you’d normally use “he”. 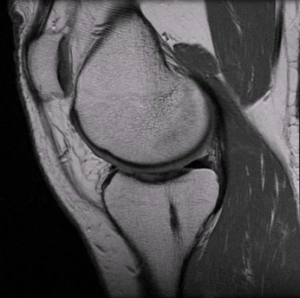 This is an actual MRI of my right knee. No shit.

I didn’t do the stretches today.  I’m going to a chiropractor and he has me doing a different set of stretches for my back.  He took x-rays last week, and I got to look at those, which are always amazing.  If I could buy an x-ray machine on eBay, I’d be dead of radiation poisoning in a week.  I’d walk around with scans of x-ray films taken from every conceivable angle, all loaded onto my iPad.  I’d start talking to a stranger in a drug store, and say, “hey man, you think these mediastinal contours look normal? No man, I know you’re just a bricklayer, but do you think this aortic knuckle has any loss of definition? I’m always worried about adjacent lung consolidation.”

The x-rays showed one of my legs is shorter than the other.  I knew that.  I’ve known since junior high, when they would line up everyone in gym class and check for scoliosis.  They would train the new teachers by having them look at my back, as an example of a fucked-up spine.  By junior high, I’d been to the Elkhart Clinic at least a hundred times, to the orthopedic guy, the optometrist, and the allergy clinic.  It’s thirty-some years later, and I’m now going to a chiropractor, an optometrist, and an allergy clinic.  It’s a recurring theme.

When I was a kid, you’d have to wait for the TV set to warm up before you watched it.  I totally forgot about that.  We had this giant Magnavox console TV that you could shackle inside of a B-17 and drop on a German industrial city to take out an oil refinery.  You’d turn it on, and the sound would fire right up, but the picture would slowly fade into view.  One day, the picture never came on, just sound.  We turned it on and off ten times, nothing.  Left it on for an hour, just listening to audio of Tom and Jerry (not as good), no picture.  My parents opened the back, took out the dozens of little glass tubes, brought them to a drug store with a tube tester, this giant machine that vaguely resembled a stand-up video game, but instead of a joystick it had a bunch of knobs and an armada of sockets, where you plugged in the little glass cylinders.  I don’t know if you waited for a red or green light to come on or a needle to swing or what happened, and I don’t remember if they sold tubes there, but I remember every damn one of those tubes came back good.  We got another TV set, a smaller solid-state unit, and it sat on top of the deceased set, which functioned as a TV stand for the next decade.  This was Indiana, everyone did this.  I bet a half-million Hoosiers have their new flat-panel LCD HDTV sitting on top of an old beast like our Magnavox.

The Magnavox had a little lead box inside of it, containing a couple of tubes that gave off x-rays.  The lead box had a ton of warnings stuck to it, in an era when a potentially lethal meat-grinder with exposed blades and no guards whatsoever would not have a single warning on it.  I probably could have turned this into an x-ray machine if  I could buy some film at the Osco’s where we got those tubes tested.

I think I got my first x-rays in maybe the first grade.  Chest films.  Elkhart Clinic.  I had pneumonia for weeks.  My sleep cycle went completely off; I’d sleep twenty hours in front of the Magnavox TV, then be awake all night, reading Encyclopedia Brown.  It must have been around October, because my mom said I should just wear the x-rays as a skeleton costume.  I’m sure she said this because I probably asked for a Spider-Man costume roughly 48,724 times that month.

The guy that wrote and directed the Encyclopedia Brown TV show also wrote and directed Better Off Dead.  He also animated the Whammy on Press Your Luck.  He often casts Curtis Armstrong in his movies, better known as “Booger” from Revenge of the Nerds.  I always used to see Armstrong in the BMG cafeteria when I worked at Juno.  I also used to run into Diddy in the elevator all the time.  Booger was much cooler.

I turn 40 in a week.  I can’t really wrap my head around that.  I’m sure there’s some Nick Hornby book I can read that will explain all of this.