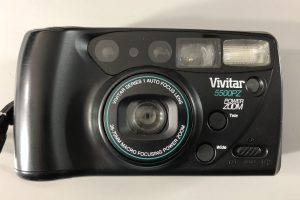 So, in the “buying old crap I had twenty-five years ago and threw out at some point,” I found another Vivitar camera that is (almost) the same as the one I had from 1993 to about 2000.

I talked a bit about my history with analog film a few years ago, when I last fell down the analog film k-hole. I bought this Vivitar camera during the summer of 1993, after not having a camera at all for about three or four years. I was working at Montgomery Ward that summer (in addition to another full-time factory job) and had an employee discount, so I picked up the most camera I could get for about $100 at the photo counter in their Electric Avenue department at the Concord Mall.

That hundred bucks bought a 35mm point-and-shoot. It had a plastic body, but a decent Series 1 glass auto-focus lens. It was a power zoom, so it could zip from 38 to 70mm focal length with motorized control. The film load/wind was also motorized; you dropped in a film cartridge, closed the door, and the camera automatically sucked the film into the takeup reel. When you hit the end, it automatically rolled it back into the canister. The camera also had blue-teal accents to it, which was Nineties as fuck.

I bought this camera with the intention of documenting shows. It was the height of death metal and the zine scene, and I wanted something I could sneak into concerts. I was going to a lot of shows with Ray, and getting free passes to stuff to interview bands. In practice, I never got to take pictures at shows, because security was always really shitty about it, even when a record label gave me a photo pass. And this was a fairly worthless camera for taking pictures of bands, except maybe candid, backstage stuff at a close range with a lot of light.

Ultimately, I didn’t take that many pictures with this camera. I think maybe two dozen rolls went through it during those seven years. I took a trip across the country in 1995 and shot maybe six pictures total. A Disney trip in 1997 was about two rolls. The 1999 cross-country trip was another three, maybe. Getting a camcorder in 1996 reduced the amount of film I shot. Getting a digital camera at the end of 2000 relegated this thing to the back of the closet. I don’t know when I got rid of it; maybe when I moved in 2005.

Ironically, the most-seen photo from this camera is one you may be familiar with.

I was hunting for this camera online, and found this 5500PZ on eBay for seven bucks, including postage. When I got it, I realized it’s not exactly what I had. Mine was slightly thinner, with the zoom controls on the back, not the front. I’m sure it’s optically the same. But it bugs me that it’s not identical, and scanning through other eBay auctions, I can’t find the model that is exactly like mine. Maybe Vivitar sold some oddball model exclusively to Wards. Anyway, for seven bucks, close enough.

I put a battery in this one to test it. It uses a small lithium battery that was hard to find online. The zoom motor is much louder than I’d expected, and the zoom itself is not smooth and very slow. It’s not exactly the auto-focus that my new Canon has. I didn’t have any film in the house, so I ordered a few rolls, and we’ll see how it goes.

I’ve also gone back and started scanning some of the old photos I didn’t have scanned from this era 25 years ago. It’s a reminder how much of a pain in the ass film was. It also makes me think too much about exactly when and where photos were taken, since EXIF wouldn’t be invented for another half-decade. Trying to not get into too much of a nostalgia backslide, which leads to the regret that I didn’t take more pictures back then. But it’s understandable when I go to pay for film developing. Anyway.