I keep mentioning that my first bass was one of the Cort headless basses with the Steinberger licensed tuners.  I’ve got a duplicate one sitting at the house now, and my old roommate has the original one.  But that actually wasn’t my first bass.  I have to start the story with how I first decided to play bass.

I had a friend named Jamie who was a 15-year-old guitar prodigy, one of those guys who spent all of his time locked in the basement learning Steve Vai and Yngwie Malmsteen songs note-for-note.  I took a semester of piano in high school, and had a little Casio keyboard I screwed around with, but wanted to play something else, because strapping on a keytar and rocking out some Rick Wakeman solos didn’t exactly appeal to me.  I met Jamie because he was in a band with Ray and Larry, and after he quit or they fired him or whatever, I used to go over to his house in Granger, right by the UP mall, and just hang out, watch him belt away sweep-picked arpeggios on his Ibanez, and talk about Joe Satriani.  He said I should learn bass, and I thought about it, but didn’t jump on it, partly because I didn’t own a bass, and didn’t have any spare money, with all of the end-of-high-school expenses looming, like prom, college applications, SAT tests, and all of the other junk they nickel and dime you with at the end of your senior year.

I went to prom, and we originally planned on some day-after-prom trip to Great America, but ended up not going.  So the Sunday night after prom, with that extra money burning a hole in my pocket, I called up Jamie and told him I wanted to start lessons.  He told me to come over, and he’d charge me five bucks an hour, and I had to buy him smokes, since he wasn’t 18 yet.  I used the cheap bass he had at his house, and we did all of the basics: EADG, the major scale, breaking apart chords, and a basic bass line.  My alcoholic stepdad had an old acoustic at our house, so for the time being, I could practice on the lower four strings of that, but I needed to get my own bass.

Musical instruments are pretty cheap now – you can get a brand new Squier for a hundred bucks online, and the build quality of even the cheapest Chinese-made guitars are pretty decent, especially now that half of the stuff is done by robots or CNC machines.  But back then, a crap guitar cost a few hundred bucks, and none of the pawn shops in Elkhart had anything even playable.  (I’m sure people will disagree and say they had tons of 60s Fender Jazz basses sitting around in pawn shops for a hundred bucks a pop back in the 80s.  All I know is we did not in the middle of nowhere, Indiana.)  I always used to go to the couple of pawn shops downtown, but they would generally have maybe one or two basses, and they were typically beyond repair, things that were junk back in the early 70s and had now seen decades of abuse and neglect.

So I couldn’t find a used bass, and I certainly couldn’t afford to shell out for a new one.  But, I had a JC Penny charge card.  I’m not sure why; I probably filled out the application to get a free candy bar.  The Penny’s in the Concord Mall didn’t sell electronics, but they did have a catalog department.  So, I went there, and sight unseen, ordered the only bass they sold through mail-order. 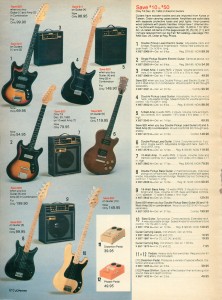 Check out this catalog page.  This is from a 1982 catalog, but the 1989 offerings were pretty similar.  Most of their instruments were made by a company named Harmony, which back in the 60s made instruments that are coveted by a small group of fanatics over on eBay. But I think they went out of business and someone bought the name and started slapping it on low-end instruments made in China and sold through catalogs.  There are two basses shown on this page; I ordered the one on the right, the single-pickup design.

About my bass: I think it was called a Harmony Igniter.  It had the P-bass-shaped body, although mine was black, along with a very cheap pickguard, single pickup, bolt-on neck, and very low-end tuners that stayed in tune for about six minutes.  It showed up with mile-high action and the whole thing felt like plastic. It had a super lightweight plywood body and the neck felt okay, with a very glossy finish and razor-sharp fret edges.  The sound was very anemic, with weak electronics, and of course the factory strings were junk.  But, it was a bass, and I played the hell out of it, until I got the Cort about a month later.  I kept it as a backup, and also carefully removed the pickguard and painted it, a weird Eddie Van Halen meets Jackson Pollock abstract mess of splashed Testor’s paints that actually looked pretty cool on it.  If I was smart, I would have tore out the pickup and put in something hot, and at least changed the strings.

The bass is a distant memory to me; I have no pictures of it, no documents or instructions or old manuals, because it came with nothing.  I got a “real” bass about a month later, so I spent little time on this one.  It came to school with me, and I ended up trading it to a guy in my math class who was studying violin making and did a refret job on my Cort bass.  What actually lived on for much longer was the amp and case I bought from the catalog.  The case was cheap but had backpack straps, and I think Simms might still have it somewhere at his house.  The amp was a plastic piece of shit that had a clock-radio speaker and could run on C-cell batteries.  After it died, I tore out the “amp” part, a little circuit board the size of a business card, and used it basically as an overdrive pedal and headphone amp for years.

There’s also little to no Harmony information on the web, at least about the late 80s version.  There is a Harmony collector’s site, but it focuses on the 60s version.  There are a couple of people who have mentioned the name over at Talkbass, but I don’t know anybody who has one.  I’m very certain that nobody with a functional fireplace would hang onto one for long.  There is a part of me that almost wishes I could find another one in a dusty pawn shop or an eBay auction for $40, just for goofs, but I’ve wasted enough time and energy just hunting down that catalog page.

Anyway, there’s a brief look into a k-hole for you.  It’s sort of infuriating to me how a part of history from only 25 years ago is completely unsearchable on the web, but you could probably find a million more things about some event that happened in 1865.  That’s the weird thing about technology and the constant flow of information.  Items that were in paper records from over fifty years ago will live on for much longer than, say, TV commercials that were broadcast to millions in 1986.  Part of me thinks that at some point, some new technology is going to come out, like a low-power MRI that can scan the slightest iron content in print books and digitize entire libraries in ten seconds flat, and there will suddenly be a huge influx of data that was previously gone.  There is a part of me that hopes this never happens, because when it does, my writing will completely cease, and I’ll spend all of my time digging through the internet instead of actually writing.