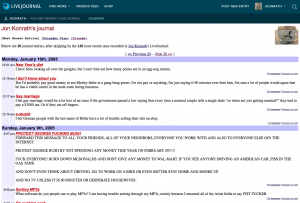 I recently found myself back at The Big Fun Glossary, which was a point of obsession a dozen years ago. It is the story of a college-aged punk rock slacker and his band of friends living in an old farmhouse in rural Virginia in the mid-90s, told in a wikipedia-type A to Z glossary. As a person who left college in 1995 and knocked around a farm state for my formative years, I took great interest in this, and ended up ripping off the entire idea, using the rough hosted wiki software on his site to start brain-dumping my own entries into a bunch of topics. This became The NecroKonicon.

I worked on The NecroKonicon on and off for about four years, although it was really more like a sudden burst of new writing, a few years of tweaks, and then a push to freeze the topics and push it into a paper book. The book itself didn’t sell at all (or, you could say it sold as well as any of my other books.) But I got a lot of comments and mails about it. And the people who started the Bloomington wiki at Bloomingpedia.org claim my site was one of their inspirations to get their own site going.

At some point, I moved all the topics to this site and made it a bunch of static HTML pages. After the book came out, I eventually pulled the site, partly because I didn’t want to potentially undercut book sales (dumb), but there were other reasons.

Now, I sometimes wonder what I should do with the site. I sometimes think about doing more work on it: updating pages, getting better pictures, adding new topics. Or maybe the “underside” of the site needs to be changed, like moved to some wiki software, or maybe like a blog platform.

There are a few things that make me waver on doing anything with this:

But… it still calls to me. I often think about some way of turning these old entries into some sort of fiction book, or using the framework for making a hypertext book, or something.

The other possibility is something I started doing a long time ago, I think in the first year or two of this blog (then called a “journal,” because the term blog did not exist.) At that time, I’d hard-coded in a glossary of terms, maybe because I had Infinite Jest stuck in my head, or wanted to use hypertext more. I wanted to have the ability to mention “414 Mitchell” and then go to a popup or page that contained a definition and stories about the place I lived in Bloomington for two years. But I coded this by hand, and it was a huge pain in the ass.

I’ve thought about this more, and like the idea of using WordPress shortcodes, like so a term surrounded in brackets becomes a link to a section of the web site with a bunch of pages of terms — or something. I need to think about this more. And it’s obviously something that’s a time-sink, so maybe I shouldn’t.