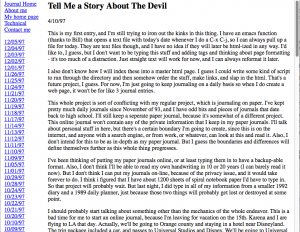 I’ve been meaning to write a post about this forever, but someone else at The Ringer did such a great job of it. Check it:

The Day the Good Internet Died

The one thing I find interesting about this article is the thought that maybe it wasn’t that the death of Google Reader killed off blogging, but that the death of blogging killed off Google Reader. It’s true that we all devolved into social media doom-scrolling instead of actually reading, but another factor is that Google was pushing people into Google Plus, and the asinine assumption that people would rather find what they wanted to read by scrolling through eleventy million messages rather than going to a list of exactly what they wanted to read. (What Google actually meant was that they wanted you to scroll through eleventy billion messages, with every fourth message being an ad someone paid them to run.)

I’m old enough to remember the first wave of blogs and interesting/time-wasting web sites, because I spent a lot of the late 90s and early 00s paging through them while I was at work or sitting at home without cable TV. But in that pre-Reader era, I did it by having folders of bookmarks. I’d go to my “daily” folder and sequentially click through each bookmark, trying to remember where I left off the day before. This was a great way to waste time, but not user-friendly, and it required me to remember where I left off. (I still had a memory then, which did help.)

Compared to this, Google Reader was amazing. I could keep track of everything in one place, and read the things in order, with counts of unread articles, and indications of what I already did see. All of this was possible because of RSS, which was a perfect example of the interoperable web. The closely-related iGoogle also had the ability to make a widget based on a web page’s RSS feed, and RSS was very integral to the advent of the podcast. It was so mind-blowing and vital at the time, that I hacked together a script that would output RSS for the pre-WordPress version of this blog, which was hacked together with a bunch of homebrew shell scripts, emacs extensions, PHP, and gaffer’s tape.

After the death of GR, I went on to Feedly, but every blog I read either died a high-profile death, or stagnated with no new posts. I keep hearing about these revival of blogging things and people saying Medium or or Longreads or Substack or whatever the hell else is the next big thing. And no matter what it is, it devolves into people selling Tony Robbins-esque bullshit classes on how to get rich in real estate. There are still a ton of people blogging, but “blogs” are now the things hanging off the side of dentists’ web sites and posting daily listicles about proper gum care to increase their SEO.

I used to bitch about how the money people and con men would fuck up the web long before the web even existed. I started throwing letters into this void (ala usenet) before AOL’s Eternal September started. In 1995, at my first real job. I was writing docs for one of the first web browsers that added SSL, while a marketing drone stood in front of my desk barking about how they needed to ship this immediately so they could sell fifty-dollar t-shirts on the web for the first time ever, and I thought this is not going to end well. And it didn’t.

And now, every time Google drops a vital service or Facebook decides they want me to look at stuff in a new inconvenient way, I always have a first thought: maybe I’m just too old for this stuff, and when I lose my shit because I’m forced to watch a TikTok video to figure out how to change my refrigerator’s water filter, I’m doing the same thing my parents did in 1987 when they had an aneurysm and started screaming about the Japanese taking over because channel 16 suddenly moved to channel 34. But then I always remember: follow the money. Google Reader got killed so we could be forced to watch more ads. The Facebook algorithm is set up to force us to watch more ads. Amazon stopped putting the names of products in their receipts because Google was using them to sell more ads. Everything is because of money. I was right. The money people ruin everything.

Baker’s article brings up an old Alex Balk article, which says the following:

Here I will impart to you Balk’s Third Law: “If you think The Internet is terrible now, just wait a while.” The moment you were just in was as good as it got. The stuff you shake your head about now will seem like fucking Shakespeare in 2016.

This is so fucking true it hurts. I blogged almost every day in 2010-2011, frequently wishing blogging was as good as it was in 2004, which is when I was bitching about how much better personal journals (the predecessor to blogs) were back when I started this stupid site in 1996. Now I wish things were as good as 2011.

I always wonder if there will be another era of Good Internet, or if we’re in the middle of it and I don’t realize it. All I know is blogging is still important to me, because I know as long as I keep paying my bills, I can still keep my stuff here, even if nobody can find it anymore.