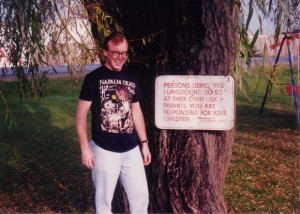 There is a level in Modern Warfare 3 called “Mission” and everybody seems to love it, because every time I’m playing and “Mission” and any other level other than “Terminal” or “Dome” comes up, everyone votes for “Mission.”  (“Dome” is one of those tiny levels where everyone shoots everyone and the maximum score limit is reached in about 122 seconds; “Terminal” is from MW2 and everybody’s memorized the map very well and knows where to stand and snipe and camp and plant claymores.)  I personally hate “Mission” and I don’t know why.

The word “Mission” reminds me of two things.  One is the song “The Mission” from the Queensryche album Operation: Mindcrime, which I pretty much memorized in 1988.  It has this weird chanting part, and one time my mom ran downstairs and told me to shut it off because it “sounded like Satanism.”  The other is The Mission, as in the neighborhood in San Francisco, which I only knew about prior to moving here because of the concept of mission-style burritos.

I don’t know what legally constitutes a mission-style burrito.  In college, there was this place on the second floor of a building on Kirkwood that made alleged mission-style burritos, which they advertised as “burritos as big as your head.”  I don’t think they were technically as big as your head in a volumetric sense.  They were potentially as long or wide as your head, but not as big as your entire skull, at least not mine.  (Of course, I have a giant head, and the biggest fitted cap you can buy at an MLB ball park barely fits me.)  I never ate there much, but a few of the people that spent all of their time at Lindley Hall used to eat there constantly, and I went a few times.

One night, I was leaving for Canada, and my roommate came home from the burritos as big as your head place as I was packing, and took a shit that filled the townhouse like a tear gas grenade thrown in your face at a protest.  We had to open the windows and it still felt like getting hit in the face with pepper spray.  I threw everything in my bag as fast as possible so we could hit the road, leaving town for another country at nine or ten at night, going to one of those stupid programming contest things where we always thought we’d smoke the other teams, but we ended up maybe finishing one of the twenty programs and wasting our time and money and effort, but at least we’d end up getting blotto in some new town.

I sat in the back of this Bronco truck, still depressed over some breakup that happened a week or two before, one of those relationships I thought was perfect and pure and forever until it got up to speed and then exploded like a car with no oil in the crankcase.  Leaving for another country with promises of exchanging funny money for many alcoholic beverages was just the thing for this kind of funk, except I knew that it never really worked.

We raced across Indiana and Michigan, hoping to outrun a snowstorm, and got to the border in Windsor some time after midnight.  The customs agent asked if we had any guns, and I yelled from the back, “WHAT DO YOU NEED?”  They still didn’t search us, and we drove into the great white north.  Hours later, we stayed at one of the worst hotels imaginable, and I slept on the floor of a closet, wooden paneling everywhere, a crying clown painting on the wall, the smell of mildew and dust mites everywhere.

I don’t think we ate any burritos in Canada.  I drank too much, mostly Molson.  We did not answer any of the problems.  I wonder if any of the people who did solve the problems ended up working on any of the Modern Warfare video games.  I don’t know.  All I do know is that I feel like a sober alcoholic at a liquor store every time I boot up that game, wasting away my hours trying to get to the next level instead of writing, or thinking of writing.  If writing were as addictive as video games, I would be Leo fucking Tolstoy at this point.  I am not.