I have a new book.  It is called Atmospheres. I posted about it the other day.

And that’s the part that sucks: coming up with an actual design, an idea. If I wrote stupid murder mystery books and knew it was Colonel Mustard in the conservatory with the revolver, I’d throw “revolver” into a stock photo site, pay the five bucks, pick some pretty colors, and done. But I write abstract books that can’t be summed up in an icon like that.  (I know, “maybe you should write murder mysteries.”  But seriously, fuck that.)  My dream would be to have an agent or publisher or majordomo of some sort who I trusted, who would take the manuscript, come up with a cool title, execute on the cover, and sell the damn thing.  But all of those are my job. And I’m finding that even if I pay someone to do part of that, I can’t really get what I want.

Case in point: this time, I went to fiverr and found a design firm to do the cover.  They were in Bosnia, so it was cheap, and they did a good job if my book was a Tom Clancy techno-thriller.  (To be fair, this was a rush job, and they didn’t see the actual book.)  Anyway, here’s what they came up with: 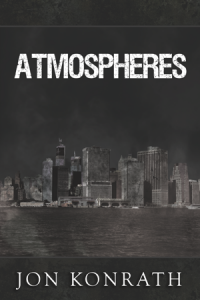 Like I said, it looks okay, but doesn’t really fit.

So, off to do my own thing.  I started pulling pictures out of Aperture and throwing them into CreateSpace’s cover creator. First up, a metal grate, snapped on the Lower East Side about a decade ago, with a little manipulation: 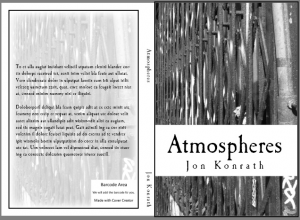 That was okay. It looks like a Penguin reissue of an old Paul Auster book, maybe. Next, I tried with some plane wreckage I snapped in Alaska: 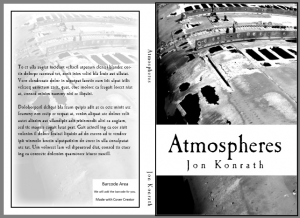 That’s okay, but doesn’t entirely do it. I gave the fake hipster urban decay thing a try with a picture from inside an abandoned train station: 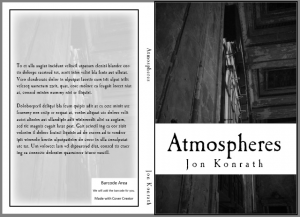 That looked a little too much like a city college’s poetry anthology. Meh.

I was going through pictures from Hawaii, looking for some Eraserhead-esque industrial waste. The first thing that came to mind was the sugar cane factory in Maui: 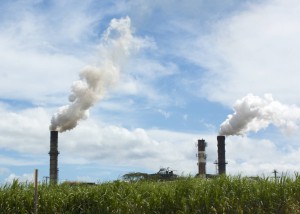 I fucked around with that a while, and eventually lost the smokestacks, keeping only the clouds.  Smash that to black and white, grain it up a bit, and here’s the mockup of what eventually happened: 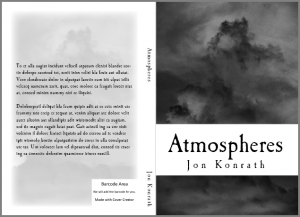 Another thing that changed, after the fact: I originally intended to use the new matte cover finish that CreateSpace offers. I ordered a proof, then proofed digitally and took the book live, ordering another copy from the Amazon page. That book arrived before the proof did, and there were a few things I didn’t like. First, the trim was weird; when I sat it next to a copy of Thunderbird, it was maybe an eighth inch shorter. I have a whole shelf of POD books that are nine inches tall, and they do not vary by an micron in their height, but this one did, radically. Also the cover was slightly crooked, with part of the front image on the spine. And the cover stock itself felt “wavy” and cheap, like a photocopy on thick paper.

So, I changed it to a glossy cover. Hopefully the varnish makes it a little more durable. I wasn’t sure about the trim size thing, and then the proof came in the mail, and it was the right height, with the right spine. So, maybe the first one was just someone asleep at the wheel.  Either way, if you were one of the few people that ordered immediately on launch day, you have a rare collector’s item.  Put it in mylar and maybe it’ll be worth a lot someday.  You’d get a better ROI if more people bought the other book, so do me a favor and tell all your friends. 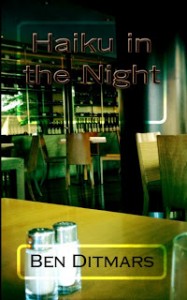