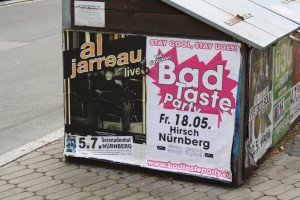 So I booked my trip to Germany this week, which was a huge hit on the credit card, but at least I figured out the dates and times.  I’m going to be in Nuremberg for basically a weekend, and then Frankfurt for a week.  Travel times screw with that a bit, though.  I couldn’t figure out a flight to Nuremberg on a Thursday, and my first strike on all of the deal sites ended up looking like this: Wake up early for work on Thursday, work all day, take a twelve-hour flight from SFO to Zurich, then sit for eleven hours until I took an hour-long flight to Nuremberg.  Um, no.

I eventually found a trip where I left a little later on an SFO to Frankfurt flight, then sit around for almost seven hours until a half-hour flight to Nuremberg.  If I was smart, I’d skip the connecting flight and take a two-hour train ride, but I don’t know how to deal with the customs, luggage, tickets, etc.  I know everyone speaks English, but even in the same scenario in America, I’d get stressed out.  All of this means I have to sleep on the plane ride out, because there’s no way in hell I will be able to power through two days of no sleep and airports.  Sonata, take me away – I need to sleep on that flight.  And I will probably pay to get into one of those lounges at the airport and take a long shower and curl up with some WiFi and a power connection for the layover.  Hopefully there will be plenty of cased meat German goodness for me to consume during my wait.

Speaking of Germany, we bought a second car, actually a new primary car for S.  It’s the Jetta sportwagon, which is pretty nice.  It has all of the extras, like a huge moonroof, leather heated seats, and a whole armada of lights and motors and switches I will never understand.  I am fine with the Prius C as my daily driver, mostly because I don’t drive daily.  I’ve had the car for three months and put 800-some miles and only two tanks of gas in it.

I’ve started a new book, which is good.  It’s a lot different than my other books, and that’s about all I can say about it, except that it’s been a little slow out of the gate, but is very heavily over-outlined and planned from the start.  It takes place in Seattle, which has been interesting for me.  Although I’m only a few days into it, I am hoping to keep up with my current rate and maybe get a draft done before Germany.  Fingers crossed on that.

Atmospheres has not sold at all.  It hasn’t been reviewed or mentioned or purchased, aside from one or two brief blips on the radar.  It’s fallen completely flat, and I went into a huge post-partum depression over that.  There’s nothing I can do about that except go out and try to write another book, but it’s extremely depressing to finish something you really love and then realize you have no audience at all for it.  I realize it’s a hard book to read, but it’s got some of my favorite writing in it, and went in a new direction for me, with a lot of rawness and honesty I haven’t been able to work into other books.

But it’s a tough sell, and it’s not the kind of thing I can shore up with ads and targeted mentions to communities like it’s a YA vampire book, because there isn’t really a community for this kind of shit.  I’ve been greatly distancing myself from the Bizarro community and the literary fiction category, and have completely forgotten about the alt-lit thing, because I’ve realized I don’t fit into any of those, and I don’t feel welcome.  This shit is high school all over again, and I’d rather write.  So, that’s what I do.

Not much else is up.  Still taking bass lessons, which has been good, except that my teacher let me play his Precision bass, which is one of those 50s reissues made in Japan in the late 80s, and it’s such a phenomenally awesome bass that I immediately want one.  I’ve got four basses, three that are never played, and I’ve been scheming some way to arbitrage my way into something else, maybe sell three and build one.  I should just fucking practice and stop thinking about it, but those vintage frets and lightweight bodies full of punch make me jones for something else.

It’s quickly becoming summer here.  It’s gout season right now, and I’ve got stiff joints and fingers and a clicky neck that makes me think I should just move into my chiropractor’s office.  Been reading that new Barry Miles bio on Burroughs, which I’m enjoying.  I have read too many Burroughs bios in the last six months, but this one is pretty solid.

I’m starving and 1500 words in for the day, so I need to look into some waffles or pancakes or bacon or all three.