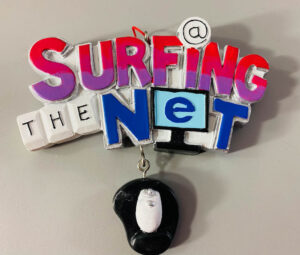 Sunday morning. It’s been two months since I updated, so here goes. Unrelated picture: thanks to Jessica Anshutz for the Christmas ornament. Do people still call it surfing the net, or was that just a 90s thing? The phrase reminds me of my time at Spry/CompuServe, when Internet World was a big thing, and there was no shortage of dumb marketing trying to drive people online. And look how that turned out.

Exhausted today. I had an accounting final yesterday and it was like running a marathon in warm weather. I’d been studying three or four hours a day for the last two weeks, and in May, I’d done a finance boot camp that covered the same information. I took the practice test twice, and woke up at 0500 on Saturday to drill for three hours before the proctored exam. The class is a graduate-level accounting class, and I’ve never taken accounting. One test, 70 questions, three hours, about half multiple-choice stuff about auditing rules, and the rest big formula problems. I got through it in about an hour and twenty minutes, and got an exemplary score. So I’m happy, but tired.

I haven’t gone into any details on this program, and I will probably write an end-to-end summary when I finish, but the basic gist is that it’s an MBA in IT management, and it’s a self-paced degree, meaning you pay every six-month term, and you finish the classes as fast as you finish them. Yesterday was day 60, and I am 54% through the program. But aside from an ethics class I am taking now, the only things I have left are not easy. I blew through most of the IT planning and project management classes fast, because that’s all I do all day every day. But now I’m left with that business ethics class, then finance, econ, a data-driven decision making class, and the capstone project. I’d like to finish by the end of my first term, but this might creep into next year.

So last night, I crack open that ethics class. Chapter one, section one, example one, page one: the 1978 Ford Pinto explosion in Elkhart. That happened about a mile from my house when I was a kid. I only vaguely remember it, but it’s one of those events that launches me down a deep k-hole every few years, digging up old newspaper articles and pictures. Anyway, I can never escape. I think Kurt Vonnegut said something about this, but I’m too lazy to look.

In two months, I’ve written exactly 100 pages of papers. When I was writing fiction, I would write maybe a page a day. So even though I have “quit” writing (or whatever), I’m putting out way more than I used to. But, it’s not exactly enticing stuff, unless you want to read the marketing plan of releasing new Irish-themed Taco Bell menu items in Japan. I have fun doing this stuff, even though it is a completely different part of the brain. But one of the sad realizations of this is that these papers have no audience. I put in some cute reference I find clever or funny, and the paper goes to a grader who reads through it with a checklist in the other window, looking that I completed each step in the grading rubric, and that’s it. Nobody is “reading” my papers. I didn’t have much of an audience as a writer, but there was that thought that people would read my books and catch the little jokes I would hide in there, and I realize that is an important part of the writing cycle. If I was writing fiction and never releasing it, I’d have the same problem. Lots more to say about this problem, but not right now.

Big trip next week. On Saturday, I leave for Stockholm, Sweden. I’ll be there for a week, taking pictures and eating. I have not planned anything yet, and have been too busy with work and school to do anything other than book the tickets and the hotel. More on that as it happens, I guess.

I have not really been taking any photos lately, either. I think I took the new camera out once since I’ve been back to Denver, just the usual loop around NAS Alameda. I don’t think I even posted that many pictures from Denver. I’d go take more today, but I’ve got to tear down the camera gear and plan my pack. I’ve wanted to go to Sweden probably since college, so it will be a fun one.