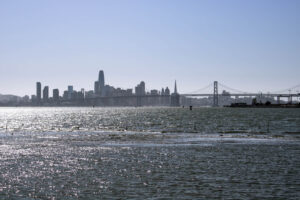 Yesterday, I took the 8000th picture with my Canon T6i. It was nothing spectacular, just a quick snap at the park by my house in a series of a hundred-some pictures of a park where I’ve taken way too many photos over the years. The sun was wrong and the glare was a bit much, but I hit hit a big round number on the odometer, a curiosity, but something I’ve been slightly obsessed with.

I’m not sure what is considered a lot of photos. I think wedding photographers take maybe two or three thousand per event. Baseball photographers are about the same. I think an average outing for me is about 100 shots an hour. Turn on bracketing and I take three times as many. I haven’t shot a baseball game in forever, but that’s when I turn on continuous shooting and burst through a dozen shots at once.

My Lightroom catalog currently has 47548 photos in it. Maybe 200 of them were taken by others, childhood photos. My pre-digital film history is about 600 pictures, plus or minus whatever I haven’t scanned yet. After I got my first digital camera at the end of 2000, the magic of EXIF metadata takes over, and it’s very easy to track my output.

I got an Olympus D-460 in the final days of the year 2000. 1.2 MP, a 3x optical zoom, SmartMedia cards, and a odd-sized disposable lithium battery (CR-V3 – try finding that on vacation). The camera was small, but not pocketable. It was similar to film cameras in that you consciously had to carry them with you, in a special case or pouch, along with special cables and card readers and batteries and accessories.

From 2000-2005, I took 2817 photos with the Olympus camera. That includes I think eight Vegas trips, two Florida trips, a Hawaii trip, and some other oddball jaunts, plus everything around town. A week out of town would typically mean maybe 150 photos, with about 20% of them being blurry or dark. It was definitely behind the curve technology-wise, but I managed some great pictures with it. An example album: my 2003 Hawaii trip.

In 2005, I was about to go to Hawaii for the second time, and wanted a better camera. I picked up a Fujifilm FinePix S3100, which was an oddball hybrid point-and-shoot. It looked almost like a baby DSLR with the side grip and larger 6x (non-removable) lens, but it was only 4MP, and definitely not pocketable. It did use AA batteries, but sported the oddball xD memory card, so I needed yet another card reader. This camera was capable of taking better pictures, but it was also notoriously bad about botching things in automatic mode.

The Fuji saw 4044 shutter activations from when I bought it in 2005 to when TSA broke the zoom lens in the fall of 2007. It went to Hawaii, Berlin, Amsterdam, Alaska, a few Wisconsin and Indiana trips, and made the move to Colorado. I just about doubled my annual pace with this one. Example albums: Amsterdam 2005 and Berlin 2006.

In 2007, right as we were entering Rocktober and I was going to many baseball games, I picked up a Canon PowerShot A570. My dad had a similar camera, and Canon seemed to be ticking a lot of boxes with the PowerShot series: a bit bigger than a deck of cards; standard AA batteries; standard SD cards; a decent (4x) optical zoom; 7 MP; manual modes; optical viewfinder (this was when they were vanishing from smaller cameras and you had to hold it at arms’ length and squint to look at the LCD screen you couldn’t see in the sun), and about two hundred bucks. It even shot video. This camera wasn’t perfect and it wasn’t pro, but I loved it.

I got 2093 shots out of the A570 in the 15 months I had it. It went through the end of the 2007 baseball season, went to the Bahamas on our honeymoon, and covered our move to LA and then to the Bay Area. And then on a Christmas trip to Milwaukee in 2008, I dropped it in the toilet at the Harley-Davidson museum, and that was that. An example album from before its subermersion: Bahamas 2007.

I quickly ordered the next iteration of the PowerShot, the A590. It was mostly the same camera, with a 1 MP bump up, and weighing about an ounce less. I still have that camera (somewhere) but it effectively was used only in the year 2009. Two things happened: the addition of a DSLR for a main workhorse, and the addition of an iPhone, which meant my day-to-day shooting pictures of cats and walks at work and whatnot now happened on the camera always in my pocket. Regardless, the A590 got 1838 shots in a year. Example album: Mexico 2009.

My first DSLR was a Canon Rebel XS, which I got for my birthday in 2010. This completely exploded the amount of photos I took. There were two baseball games that August in Denver where I took more pictures in 18 innings than I did in the entire 2007 season. Part of that was burst mode, and part of it was a constant need to change lenses. Due to the DSLR, my more frequent use of the iPhone, and my return to film in 2014, I quadrupled my output in this era. My total shutter count on that camera is 10873. It went about everywhere in the six years it was my main camera: London, Berlin, Nuremberg twice, Frankfurt, a few Hawaii trips, a bunch of Midwest holiday runs, and I’m sure more I’m forgetting. There’s lots of the XS on my Flickr, but a good example is Hawaii 2013.

I tried going to the EOS M mirrorless, but it didn’t take, Right before my trip to London, I upgraded to the T6i I use now. I used it on that first London trip, my last Alaska trip, some Vegas weeks, and other odd stuff, but I didn’t put a lot of mileage on it. It also didn’t get much use at the start of the pandemic. Total shots from 2016 to last fall was about 2500. I’m still using it, but a good example album would be Memphis and Graceland 2016.

So I’ve about tripled that in the last three months, and I need to continue. I don’t think I’m a great photographer, and I don’t know if the number of times the shutter clicks is any indicator of progress. But that’s the goal right now, to get as many pixels into memory and try to look at them, learn, correct, and keep going.