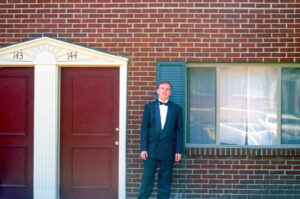 Day off today – I took a four-day weekend, no reason – so I headed to the mall in Pleasanton to buy a pair of pants. I have a wedding next month, and every pair of dress pants I own is comically large at this point. I got to the mall at about 10:37, and didn’t realize that it wasn’t officially open until 11:00. I went inside anyway, because the concourse was open, but half the stores were just booting up, the gates halfway open, lights off, employees setting up signs or counting down registers. It gave me an intense nostalgia flashback, of every time I’d opened at Wards thirty-something years ago, the usual crew of people I knew at every other store setting things up for the daily grind, walking to the First National at the main entrance to drop off last night’s take, stopping at the MCL Cafeteria for a cup of coffee before 10:00 came. The general vibe of a pre-opening mall really threw me back to the summer of 1988. I almost expected to go back into the parking lot and find my rusted Camaro waiting for me.

I got in my walk. I did not get the pants. Everything is now “stretch performance wool,” which is essentially spandex. Also, Macy’s is now JCPenney. JCPenney is now K-Mart. K-Mart is now largely gone. I don’t even know what Sears is.

Speaking of “Amazon is taking over,” in some contrary news, it looks like Amazon is closing all of their brick-and-mortar stores. I actually liked the feel of the stores, mostly because they looked like a rip-off of Borders, albeit much smaller. I’m all but certain these stores were a sophisticated data mining experiment and nothing more. Even the stock on the shelves was a data-driven algorithm, which was bizarre and somewhat maddening for a person who doesn’t read Oprah books. I’m sure they’re doing a lot more of that with their Whole Foods stores now.

A happy coincidence: so, B&N in Walnut Creek closed around the same time the Amazon store opened. Now, Barnes and Noble is actually opening a new store in Walnut Creek right as Amazon is closing. They didn’t get the old location back, and I’m sure it’s a smaller footprint, but that will be nice to see. As I’ve said before, I used to think B&N was The Enemy, and it’s hard for me to root for them now, but I really don’t want to see the one by my house in Emeryville shutter.

Another odd coincidence, Morgenstern’s books reopened in Bloomington. I’ve written about my memories of Morgenstern’s a  while ago. It’s not in the same place anymore (I think the old strip mall location is now a FedEx) and Keith mentioned from his first visit that it’s nowhere near what the old one is. But at least there’s something, especially since the Borders and Barnes and Noble that jumped into town and killed the old location in the late 90s are now both gone.

About the picture above: that’s from 1994, the day of Bill’s wedding. I’m standing in front of my old apartment at Colonial Crest, where I lived from 1993-1994. In another bit of dumb nostalgia, I just heard that Colonial Crest, which is now called The Arch, is being torn down and replaced with a new apartment complex, some 5-over-1 monstrosity with a dumb generic name and high rents for rich students.

I did some digging and what’s funny is that these apartments rent for only marginally more than I paid almost thirty years ago. I think we split a $500 rent on a 2br/1.5ba townhouse, and now they go for about $700. That’s saying a lot about the deferred maintenance issues of the place, because it was maybe about a C- in quality and value way back then. I’m sure the redevelopment is for the best, given the student population and need for housing and all that.

That said, I have a lot of strong memories of this place. Various pivotal relationship things happened here, and the start of my writing career happened here in apartment #144. I also didn’t have a car most of this year, and walked the two and a half mile route to school pretty much every day, rain sleet or snow. That long shot down Walnut or College is burned in my head, the zig-zag pattern I’d traverse to cross the northwest side of campus and get to Lindley Hall. All of this is different now. The computer science department has a new facility built where the old Brown/Greene dorms used to be. The long walk up to the UCS offices at 17th street where I worked used to be empty green fields; it’s now a giant dorm, built last year. The UCS office was completely redone into an alumni center. Everything has changed. Things change.

Another weird one: they are renaming everything named Jordan on campus. Turns out former university president David Starr Jordan was really into eugenics, segregation, and racial purity. Problem is, IU spent a century naming damn near everything after him: a biology building; a river; a main avenue cutting across campus; a northern extension to said avenue; a parking garage on that avenue; a bus route on that avenue; a shopping center. The street is now Eagleson Avenue, or David Baker Avenue for the northern part. (Named after the jazz great, not the architect who coincidentally designed my current home.) The river is Campus River; the Biology building is Biology Building. I think people expect everyone to take sides on the woke/anti-woke thing. I agree with the name change. It’s just interesting to me, given the number of times I reference Third and Jordan in my first book.