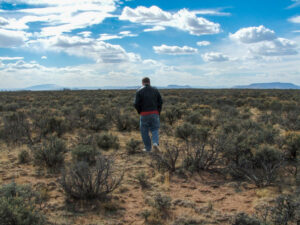 So, I sold my Colorado land this week. I probably need to explain this. I used to have a page about it, but it went away two or three web redesigns ago. Here’s the whole story, in case you haven’t heard it.

Back in 2002, I bought forty acres of land in southern Colorado. I’d always had the idea to build a house in the middle of nowhere, probably going back to when I studied architecture in high school and watched too many episodes of This Old House. I don’t remember when or how I found the seller online, but I used to waste a lot of time at work falling down random google searches. (It may have been Alta Vista searches back then, actually.) I did various research on land in Montana, central Washington, and a few other places, but ended up with Colorado.

I think there were a few other things in my head when I bought the land. This was a few years into my New York experience, and I think the day-to-day of being crowded on the island with so many people put the zap on me. My thinking was that I’d stick around Manhattan for my prime earning years, then punch out and go into hiding to write. I was also going through a mild identity crisis around my 30th birthday, trying to figure out what to do with my life. And 9/11 multiplied all of this. I wasn’t a person who was going to wrap their house in duct tape because of domestic terrorism, but there was a real strong vibe in town that something was going to go down again. People seem to forget the Manhattan mass-exodus in 2001/2002, but it weighed heavily on my thought process at that time.

I bought the land right after my 31st birthday. Actually, I think I was exchanging emails with the seller while I was in an Elvis suite  at the Stardust in Vegas on a birthday trip with Bill, Lon, and Todd. The purchase sent me down a giant research k-hole of determining what to do. I bought every book I could find on alternative construction and Earthships and solar power and how to build your own house. I was constantly trying to figure out the best way to get started, maybe buy a geodesic dome kit or something, start planting trees and plowing under clover, whatever. I needed a well; I needed a tractor; I needed to learn how to grow my own food, and this was a time when every meal I ate was delivery food. There was a lot to learn.

Like any of my other hobbies, the land was something that would be white-hot for a week or two, and then quickly fade, get pushed to the back of the stove or off the stove. But I had to get out there, see the place, see the surrounding area. That summer, I booked another Vegas trip, then rented a car to drive out across Arizona and half of New Mexico, and take a left and get to the land.

About the area: this is maybe five miles north of the NM/CO border. Mesita is more or less a ghost town, a half-dozen houses and abandoned buildings are clustered around one intersection, and not much else is there. The nearest town is San Luis, about 15 minutes away. It’s the biggest town in the county, with just over 600 people, a Family Dollar, a gas station, and not much more. The next “big” town is Alamosa, which is an hour away, and is about 10,000 people. It reminds me of Goshen, Indiana back in the 80s, with a small college campus (Adams State) and the usual big box stores – Walmart, Safeway, a Chili’s, Big R, and so on. (There used to be a K-Mart, but you know how that went.)

The land was at about 7,800 feet, in the Sangre de Christo mountains. It’s a high mesa, basically a desert. It looks like it was maybe used for cattle ranching a century ago, and worn dead. The ground is loosely covered with scrub brush and wild pinion trees that are more like bushes. There’s a whole lot of nothing out by the land; every once in a while, you’ll see a farm, but it’s mostly completely abandoned land.

The first trip was somewhat disconcerting. First, that drive from Vegas was horrible. Then the stay in Alamosa was not entirely optimal. I booked a one-star motel that was right across from an AM radio station, and whenever I tried to use the phone, the entire wiring system rang with interference, so I would hear mariachi music in the background of every call. I drove out to the land, looked at it, walked around, and thought, “well, this was stupid.” I had some plans to go to K-Mart and buy a shovel, some water buckets, and a few sapling trees to transplant on a hail mary that they’d live. But this was a summer when there was a large wildfire hours west, and the sky made my eyes burn red the entire time. Plus I was woozy from altitude sickness. After about a day, I gave up and drove back to Vegas.

One ominous thing that stuck with me was that I was driving back to the motel on one of the hour-long loops down to the property, and I went past a graveyard. There was no green grass; just a bunch of tombstones stuck in an acre or two of dirt and brown crabgrass. I had this long thought about if this was where I’d end up someday, buried in a brown field hours away from civilization. This part of the trip made the budget room at the decades-old Tropicana I had back in Vegas a few days before feel absolutely regal.

I visited the land a couple more times after moving to Denver, but never got anything done. Mesita was maybe four hours away, but an incredibly long drive through the mountains and destitute plains. If I was super motivated, I would have spent my weekends hauling house parts bit-by-bit, building temporary shelter, setting up a cabin, whatever. But I never did. I’m lazy; I can barely keep my own house clean. I don’t have the gumption to build another one from scratch. And this whole project was the dream of a bachelor. After I got married, this compound/retreat thing wasn’t going to happen. If we want to spend time in a cabin, I’ll go to VRBO and search in Tahoe, and even then, we’d be sick of it after a few nights. Neither of us are the camping type, and the older I get, the more I think there’s no way I could ever dig a foundation or put a roof on my own house. I had to replace the plumbing under a sink the other day and it damn near killed me.

I get letters every few weeks about the land, blind offers made from investors who grab the tax records from the county and spam out form letters to everyone. They are usually ridiculously lowball offers, but they’ve slowly crept up in price. I finally decided to give up the ghost and see if I could line something up. I think it took a few months of paperwork and research on the buyer’s end, but I got a deal set up. I would lose money on it, but I no longer have to pay property tax on a land I will realistically never visit again. The only other two scenarios I could see here are that I stop paying taxes and the land eventually gets sold by the county at auction, or after I die, whoever handles my estate has to figure out how to sell the place. I’d rather have the cash in the bank now.

And I won’t go on and on about this (but am about to anyway), but everyone constantly hits me with “why don’t you…” scenarios that are impossible to do, which is annoying. The land has no water, no utilities, nothing on it. Drilling a well would easily cost $20,000 and not guarantee water. It only rains a foot a year. Despite nobody being around, the county has strict building codes that prevent any hippy-dippy alternative housing one might dream of: no rammed-earth; no yurts; no tire houses; no shipping containers; no tiny houses; septic field required; no composting toilets; no permanent RV parking. If you think “what about…” the answer is no, unless it’s a ranch house that meets every building code a house would need anywhere else. Winters are absolutely brutal up there, minus-40 temps and high winds; summers hit triple-digits and bone-dry, with that altitude making it even worse. There’s absolutely nothing around except live-free-or-die times hunkering down in makeshift trailer compounds, armed to the teeth and brimming with crazy ideologies that don’t mesh well with me (or anyone, really). It’s the poorest part of the state, absolutely abject property, pretty much half the population under the poverty line. If you built that expensive solar array and then left the house for a week, it would get stripped bare. There’s just no practical way to do anything there except struggle to live. It’s cheap for a reason: it’s like living on the surface of Mars.

Despite all of this, after I closed the deal and got the money, a profound sadness hit me. Having this land for twenty years was a big part of my identity, albeit one that has faded somewhat in recent years. I always joked about building a Hunter S. Thompson compound out there, or a writer’s retreat, or whatever. But the dream is dead. That really bothered me. I guess when I bought the place in 2002, there was some intense need to have that thing that defined me. I couldn’t work on a classic car in the city with no place to park it; I couldn’t afford to buy a boat; I couldn’t build a model railroad in the basement I didn’t have. I don’t know why I had (and have) such a strong desire to do something outside of my job and my bills, but I do. And that’s still going on, and I don’t have an answer to that issue yet. The depression over this mostly passed in a day or two, but I really need to figure out the big-picture void this leaves.