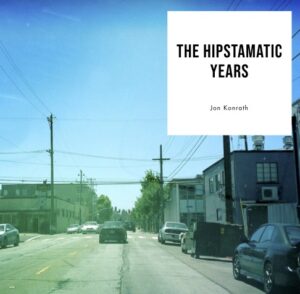 I have a new photo book out. It is prohibitively expensive, but was fun to do. I enjoy making photo books on Blurb, but I don’t expect to sell any of them. It’s great to do if you want a few copies to have around the house, but like I said, Blurb’s prices are a bit insane, and just got worse. If you’re really interested, it’s available here, but I won’t be offended if it sells zero copies, so no pressure.

The book started as a dumb collection of my old Hipstamatic images, taken starting in about 2010, when that app was still A Thing. Then Instagram got bought by Facebook, and it all ended for them. But there was that brief era when it was fun to take pictures that looked like ancient film snapshots. And it was at the same time that I always had an iPhone with me, and photography went from something I only did on vacations or specific photo safari missions to an activity I did any time I was wandering from point A to point B and saw something interesting. Anyway, the book started as just a dumping ground of images, but the story of Hipstamatic and my memories of it gave it a through line, and I wrote a few hundred words about it in there. Maybe I will post the text here later. I definitely am not doing an eBook version, because Blurb would probably set the minimum price at ten dollars for a 24-page PDF.

I have been doing a lot more photography lately. I’m at the point where I’m hoarding film and trying to sort and order and edit and post things here and there on Instagram. (Yes, I now use them, even though they killed off Hipstamatic.)

I don’t consider myself a great or even a good photographer. I think the best pictures I’ve taken were accidents. I mostly try to capture memories as best I can. I feel like I need to do more of it to get better, so that’s where I am with it.

And it’s a distraction. I need more distractions. I have been trying to practice bass, and take pictures. I’ve been scaling back on everything else. More on that later, maybe.

It is pouring rain outside. We got more rain today than we did from March to October. So, this is winter for us. Dark, windy, and time to dig out the full-spectrum light. The concrete walls in the garage are weeping, and it looks like some biblical miracle where people flock to a remote corner of France to see a “crying stone” or whatever. So that’s going on.