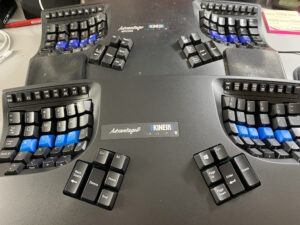 About ten years ago, I had this keyboard obsession going on (see The Cult of Keyboards) mostly because everything started falling apart health-wise when I hit 40, especially all things chiropractic. After a few false starts, I decided to go whole hog and upgrade to a Kinesis split keyboard. Because it’s about time, I went ahead and upgraded to the newest iteration, the Kinesis Advantage 2.

The original Kinesis has been pretty decent, after a brief learning curve. Typing with my fingers in the two “bowls” and using my thumbs for a bunch of the modifier keys was an interesting transition, but it means I can type away without ever lifting my hands from the home row. There are some issues, though. In the top row of the thumb keys, there are only two switches, when there really should be three, for cmd/alt/ctrl (or whatever your OS calls them.) It’s also a bit more confusing, because I used to switch between a work PC running Windows, and my home computer, which is a Mac.

I mapped things so that in Windows, the modifier keys were Ctrl/Alt and Win/Ctrl. And then on the Mac, they were Cmd/Opt and Ctrl/Cmd. That means that on the Mac, Ctrl loses, and since I type modifiers with my left hand more, it makes emacs almost impossible to use. I also had to train myself to remember that when I switched to the Mac, my Ctrl key was really the Win key. Luckily, things like copy and paste would use the same key in both places. Also, when I switched jobs, the work computer switched to Mac, so this problem gets a bit more simple.

Another complaint about the original Advantage is that it had function keys that were those little rubber chicklet keys like the Mattel Aquarius or a bad 80s calculator. They’re also very narrow. And the Esc key is one of those, which really makes emacs bad. When I was heavy into FrameMaker at the job, I remapped the Home key in the left thumb cluster as a modifier so a Home-5 was F8, and a Home-6 was F9. (5 is right under F8, and 6 under F9.) I also mapped the End key to Esc, because FrameMaker had a ton of frequently-used shortcuts that nobody knows about anymore that begin with Esc, a leftover from its days on unix systems. I would map those only on the Windows system with AutoHotKey. I gave up on that a few work laptops ago, when Frame fell by the wayside.

Also, I had minor occasional problems with the USB firmware. It was designed probably right when USB 2.0 came out, and would sometimes freak out and require a reset. Also if you typed too fast with a modifier, the modifier would get stuck. (Hint: tap the shift key three or four times, and it unsticks.) I also had the usual wear and tear, a few keys losing their printing, and ten years of food and cat hair in the crevices.

The new Advantage 2 fixes a few things. First, the function keys are actual Cherry mechanical switches. They are, unfortunately, the same small size. The circuitry has also changed, and is allegedly better than the old controller. It now has two ways to remap keys: the old way, or you can mount the keyboard as a hard drive with a special key combo, and there will be an app to do complicated remappings, or a text file you can edit. You lose the two built-in USB jacks on the underside of the keyboard, but I never used those.

I wasn’t entirely happy with the upgrade. Although the keyboard uses the same key switches (MX Cherry Brown), typing on it feels very… cheap. The keys are not as glossy and seem to be made of a slightly different plastic. And the case feels a lot more hollow. There’s more of an echo-ey plastic feeling when typing. It feels like the unit was “cost-engineered” with cheaper materials or a more efficient mold to save a few pennies. It’s possible I’m imagining all of this, or the keyboard needs to break in or age a bit. But I’ve also seen a few people on the internet that felt the same, and have messed with putting DynaMat inside their keyboard to deaden it a bit. Maybe I should try that.

I also had a giant exercise to get the modifiers to work. You can swap them around at multiple levels: the keyboard has a Mac/Win setting; there’s an OS setting; and I think my KVM might be flipping the mapping, too. Plus you can physically swap the keycaps to get the labels right. I ended up putting the keycaps on as Cmd/Option and Ctrl/Cmd, swapping Cmd and Ctrl in the Mac system preferences, and setting the keyboard to Windows mode. That seems to mostly work. I also mapped the Home key to Ctrl. Maybe I’ll map End to Esc later.

So, we’ll see if I can put a few million more keystrokes through this one. I also need to avoid reading anything else about modifications, because there are people who burn serious time swapping out controllers, doing complex remapping, and changing keycaps and whatnot. I don’t have that much skill or energy, so I’ll stick to typing.