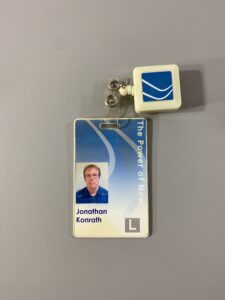 Last day at the old job was Wednesday. I had two early calls, and then was done by nine. I spent about two hours cleaning up after myself, and by eleven, I was done done, and couldn’t think of anything else to do except look at really old wiki pages and make myself depressed. By that time, everyone in India was asleep, and I don’t work with too many people in the US anymore, so I did one last look, then shut everything down, threw my two computers in a bag, and drove straight to FedEx. I gave them the company’s account number, bought two computer boxes, filled them up with obsolete laptops and my name badge, and that was that. End of an era.

Like I said last post, no cake, no dragging me to Chotchkie’s and telling the server it’s my birthday so the whole kitchen staff comes out and sings. This job did Agile (sort of), and that means you work with everyone, and you work with nobody. If I wanted to tell everyone I was leaving, I would have had to hit 79 different slack channels. And I’ve been in our Palo Alto office maybe a dozen times in twelve years, and I currently know exactly one person who still works there. And physically, he doesn’t, until the pandemic is over. So the goodbye situation was a bit weird.

Actually, not to get too into it, but the main office at this place was a bit abnormal. I mean it was, at its peak, four different two-story buildings with the distinct architectural style known as “Silicon Valley, 2002.” They were nice enough buildings, but almost everyone had an office with a door, and it was incredibly quiet there. I’d wander the halls after lunch, and it felt absolutely dead. The only people I’d see were people I didn’t know. It always felt like when I have a dream that’s set in a generic tech office building that’s an amalgam of every place I’ve worked and a bunch of office sets from TV or movies. It never felt like my office. It’s also weird that I haven’t been there since maybe December 2019, and I’ll likely never go there again. And the company is in the process of downsizing to another office somewhere else, so I definitely won’t be back.

The place reminded me of when I worked at Samsung and had to visit developers at other companies, or when I worked for Frankov and tagged along when he pitched his start-up. In both situations, I’d go to these random tech companies, and they would look like this, like if you were making a movie about a tech company. Like they always reminded me of the office to Playtronic Toys in the movie Sneakers. It was like a strange sense of deja vu, like you could tell just by looking at the chairs and cubicles and white boards and Polycom speaker phones in every meeting room that it was a tech company, and if you grabbed a random individual (one not wearing a shirt with a collar) you could probably ask them how to back out a change in git and they could tell you. Almost all tech companies look like this, although ones that are in big cities and not in office park sprawl usually also have one wall that’s exposed brick, which tells you that they are Disruptors and Think Outside The Box.

Come to think of it, we had an exposed brick wall when I was a kid, like behind our wood burning stove. Not much Disruption or Synergy went on there. No stand-up comedy, either.

Walking away from that job was more depressing than I thought. I spent the day in a funk, which wasn’t helped by the rain storm we got. (Oddly enough, it rained on my last day at Samsung.) It was much more about leaving behind the first half of that job, all of the people I worked with on the old New York team. All of them left in 2015 or so, and that was depressing then, but it all sort of hit me again, all at once. I wallowed in that for the afternoon, but then made the decision to move on. I have a real problem with nostalgia like this, and I can either simmer in it forever, or try to do something else. So, I went to the mall, and stopped thinking about it.

I was also looking for patterns and coincidences, like how I left Samsung at about the same time in 2010, and also how I left Denver in late February 2008. And we moved to Denver around then in 2007, so my original departure from DataSynapse and New York was at almost the same time of year as the end of my second tour. Another one that popped out at me was how in March 1999, I’d left my last Seattle job and was spending a few weeks of voluntary unemployment packing and mailing boxes all day, and writing on Summer Rain at night. I probably should have spent my four days of unemployment this week frantically writing, but I spent much of it digging around the back of my desk, which I will talk about now.

I’ve been getting ready for the new job, which I start tomorrow. I spent the weekend rewiring everything on my desk, swapping things out, managing cables, getting things ready for two Macs on the same workspace. The process started with the addition of an LG 4K 27-inch monitor. It’s maybe two inches wider, and about the same height, but with smaller bezels all around. The native resolution is twice as much in each direction. That means I can keep it at 1920×1080 and have the same size as before, but incredibly clear. Or I can crank it up to like 3360×1890 on my Mac, which is roughly four times as big, but would make me go blind after an hour of reading the tiny text. Mousing across the screen also takes like a day, and I’m sure the fan will start blowing like a jet engine running at combat power. Setting it to like 2560×1440 is a good compromise, I guess. The monitor has much more rich colors and all that stuff, and a set of built-in speakers I will never use. There’s also the Thunderbolt cable thing, where I can plug one cable from my computer to the monitor, then plug my mouse and keyboard into the monitor, and the peripherals and the charging and video will all work over the one cord. I haven’t messed with that one, and just use a single HDMI.

I also bought a new KVM switch, which was a huge pain. This is the third one I’ve bought in 2021, and it luckily seems to work. Nobody even knows what a KVM is or does anymore, and when you mention running two computers in a computer forum or subreddit, everyone tells you that you should just get a second bedroom and set up another desk and monitor in there, or just use your phone for everything, who needs two computers, you’re holding it wrong, etc. Most KVM switches on the market were designed in like 1947 and don’t support monitors from ten years ago, let alone all of the crazy ultra-wide, XDR, 4K, Retina-whatever stuff out there. Don’t even try to find one supporting multiple monitors.

Anyway, after days of research, I got this KVM. It supports 4K resolution over HDMI, and supports EDID, which basically tricks your computer into thinking it still has a monitor attached when you switch to the other computer, so the first computer doesn’t freak out, uninstall the drivers to your mouse and keyboard, go to sleep, move all of the windows, and so on. So now I can run two Macs into that switch, and hook up my monitor, keyboard, and mouse to it. I then can use a remote or the button on the thing and switch back and forth between computers. It doesn’t appear to have any delay or weirdness with the computers falling asleep randomly or whatever. Famous last words.

The DST shift messed with me last night, mostly because half of our various time sources changed, but half didn’t. I had an early appointment today, and was almost late because I didn’t know if I should be looking at my desk clock (which doesn’t change) or my watch (which does). So, maybe I need a nap now.