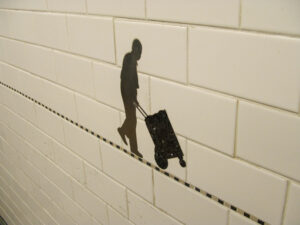 So. It’s time to write another post like this one from 2010. It’s not LinkedIn official yet, but I’m leaving my current job, and going to a new one. And that’s always a good way to rustle the various nostalgic bits of the brain, especially when as much time has passed as it has with the current employer.

I don’t like to cross the streams and won’t discuss the specifics of either job here. But the old gig is the one I started in September of 2010. And I did a previous tour with this company from 2001 to 2007. So that’s a grand total of almost sixteen and a half years of service between the two, which is insane.

This job started almost on a lark. I was working in Silicon Valley and doing the big commute and wasn’t entirely into my gig. Joel, my old boss, asked me if I wanted to come back. I said nah, I owned a house out here, wasn’t about to move back to New York. He said I could work remote. I said, okay let’s do this, and I was officially a full-time work-from-home worker, ten years before everyone else did the same.

There are two distinct eras to the job, and the nostalgia for the first half is much heavier. I really liked working on my old products, and loved working with Joel and the old crew. All of us who were there from the start-up days had basically gone to war together, and had an entire vocabulary of our own, plus total knowledge of what was where, how things worked, how to get stuff done. We were all introverts, and a decade before Slack became a thing, we all used an internal IRC server for air traffic control and general water cooler bullshitting. Nobody ever used the phone. I didn’t even have a phone; the company gave me one in the Palo Alto office, and then promptly gave my cube to someone else when I never came in. There was a lot of general insanity, a small company running within a giant one, but I really enjoyed that five year chunk of time.

I also liked that it was a strange virtual conduit back to my old life in New York. At that point, half of the team was still at our old office at Bleecker and Broadway, and the other half was up in Boston. But I worked in New York, from Oakland. I time-shifted three hours earlier to match their hours, and kept up with all of the gossip and the general zeitgeist of working for a New York company, even though I technically worked for a Palo Alto company. I went back to New York three times during that first few years, which was always a bizarre deja vu experience. Like the first time, I came into the office at 632, went right back to my old desk, and it had been vacant for the last three years. All of my old files were still in the filing cabinet. It was like I’d never left. And on another trip, I stayed at a hotel a few blocks from my last apartment. I’d walk the same exact route from the Lower East Side to the office, and it felt like I had traveled time back to 2006.

The parent company got bought out by venture cap, and everything shifted after that. Pretty much the entire team left. I got moved to another team in Palo Alto, and a new product, but I still had the old product. But we went through a big “push to cloud” where the old product was put out to pasture, and I spent much less time on it. I also started managing people, and working on this new cloud thing. I really missed my old team, and 2015 was an extremely depressing year for me.

I probably shouldn’t go into any details of the second half of my tenure. I started managing people, and loved doing that, up until the point when I had to start doing layoffs. That’s brutal, and the only thing worse than firing people who have been very loyal is getting invited to random meetings with HR and not knowing if it’s to fire people or to get fired yourself.

Anyway, don’t want to get into that stuff.

One of the things I have liked about my work situation is that the time-shifting means I have a few hours in the afternoon to write. And I pretty much floundered and was not consistent in my writing in the 00s, and figured I needed to focus and get more regular writing done after I took this gig. I’ve published twelve books in that time, and 30-some articles, plus everything written here and in other random places. I’m not sure what my work schedule will be like in the future, and I think I’m done with this constant grind of trying to publish a book every year.

The new job is in San Francisco, but given the situation, I’ll still be home until at least the fall, and I don’t think any of us are ever going to be back to five days a week in the office. (Famous last words.) The big weird thing about this job will be that I don’t switch desks. I’ll still be in my home office, have the same chair, same monitor, same keyboard. I’ll just be swapping out my old Lenovo for a new Mac. And what’s weird about that is it’s identical to the Mac I have at home.

What’s also strange is that in the pandemic, there’s no goodbye. I mean, no cake, no lunch, or anything else. I’m not big on goodbyes, and I’ve hated that I’ve have to force myself to end conversations this last week without saying “talk to you later.” But my boss is in the UK. My workers are in the midwest, the east, and India. My teams are scattered. There would be no lunch at Chotchkie’s and gift card to Starbucks, even if we were allowed to eat in restaurants. I just realized the other day that I have never physically met any of the people I currently manage. Sarah said the other day, “I feel so bad you talk about N__ and A__ every day and I never got to meet them!” And I said, “well, neither did I.”

Anyway. Old job ends on the 10th, and new one on the 15th. So I get a four-day weekend to FedEx computers back and clean out behind my desk to redo the cables and maybe sleep a bit. Then on to the next era. Should be fun.