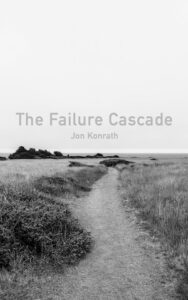 I have a new book out. Here’s the link:

This is another collection of short pieces, like Ranch: The Musical except it’s thirty-four pieces and roughly twice as long. It’s also a bit of a departure because although it contains a few super-short flash pieces, there are also four much longer stories. I felt a need to stretch out some stories a bit, and spend more time in them, so instead of a bunch of sub-thousand word things, there are some that go beyond the 3000-4000 word mark.

This isn’t like a major departure from what I’ve done in the last few books, but it is starting to move away from it. For almost ten years now, I’ve tried this absurdist/gonzo thing, and I feel like I’ve painted myself in a corner a bit. I’ve burned a lot of cycles creating a persona I now can’t stand. I’m not exactly ready to go off and write murder mysteries or tales of martians or anything, but I feel like the part of my personality I’ve mined for stories in all of my books in the 2010s has been stripped away, and I need to start doing something else. I write about this a bit in the title story of the book. I could babble more about it here, but I won’t.

This was a difficult book to pull together. I mean, the problem was this year, 2020, and everything shitty that happened to all of us. I took a little break after Ranch, and when I went off to Vegas in the first week of March, my goal was to hole up in a suite and spend seven days starting to build out this work-in-progress which was to become Atmospheres 2. And just as I got into that, the whole world ended and we got locked down and… well, you know the rest of that story, and it’s still ongoing. As the pandemic built, I worked on the book, and got it above 100,000 words. (The original was 60,000.) But the more I got into it, the more it didn’t make sense. And the idea of writing a manic book of post-apocalyptic non-linear madness wasn’t that appetizing, especially since I was spending most of my day doom-scrolling through a reality that was that but worse. So I set that book aside a couple of months ago, and started collecting together the core bits for this book.

Also: thanks to John Sheppard for sounding out all of my stupid ideas on this and the usual daily help with everything. Also Jeff O’Brien did an editing pass at the last minute, and Don Noble sold me a cover design that I ended up not using, but it was still cool as hell and now I need to write a book to match it.

The cover was shot by yours truly, on my 2017 trip to Mendocino. The whole series is on flickr. (If you ever need cover art, all of my stuff is CC, so just ask and I’ll send you full-size masters for free.)

Anyway, here it is. Let me know what you think, and thanks in advance to everyone who grabs a copy.