A long time ago, I wrote a post here about my various desks over the years. (It’s at Desks, a viewport into the mind) I was digging around in some scans, and found a few more pictures to babble about. Why? As I said in part one, why not. I have an obsession with the workspaces of other writers, so I’m always taking a snapshot of mine. 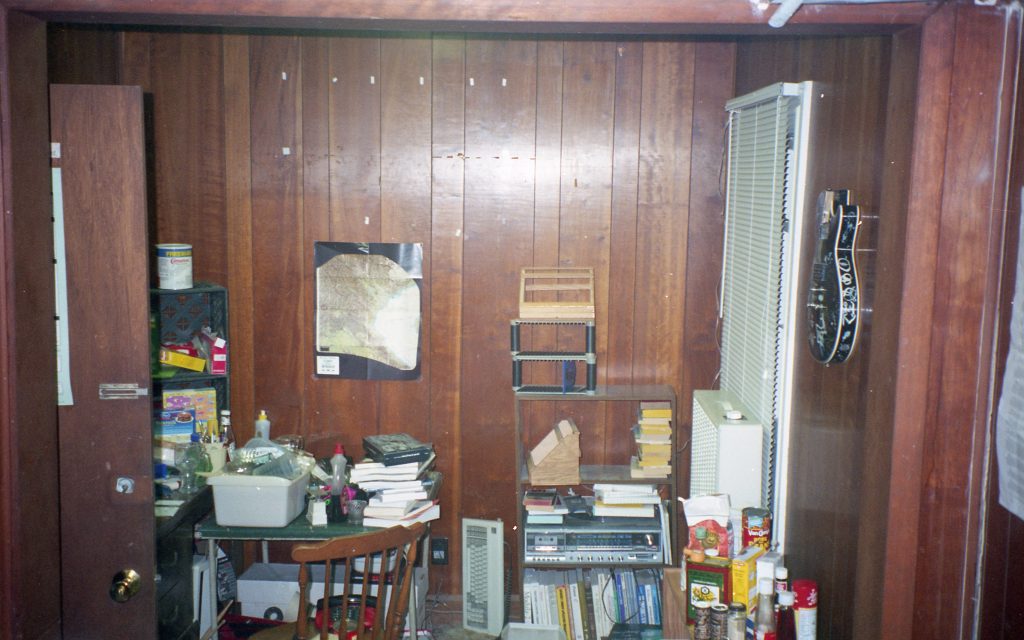 This is actually a view of my infamous 414 Mitchell apartment, as it was being torn down on the 4th of July weekend, 1993. So, the computer is gone. It’s hard to see, but to the left is a green card table. That was my computer table from probably when I was a teenager, up until that summer. I used to build model airplanes on it before that, so it was covered in Testor’s paint, in various camo colors. I don’t know what eventually happened to this table; I think it was still at my mom’s house shortly before she sold it.

The whole summer when Summer Rain took place, I had a DOS PC in a generic mid-tower case sitting on that table. Here’s it’s full of books and dishes, although I also see a copy of the Danzig 3 box set with the weird plastic HR Giger cover on there. Also check the genuine IBM PC 83-key keyboard against the wall, which is worth more than a few bucks on eBay these days. (No idea what I did with that – I think it was broken.) And of course, the horrible wood paneling. This apartment was $177 a month in the early 90s, and it shows.

Same year, next exhibit. Here’s the next iteration in 1993: 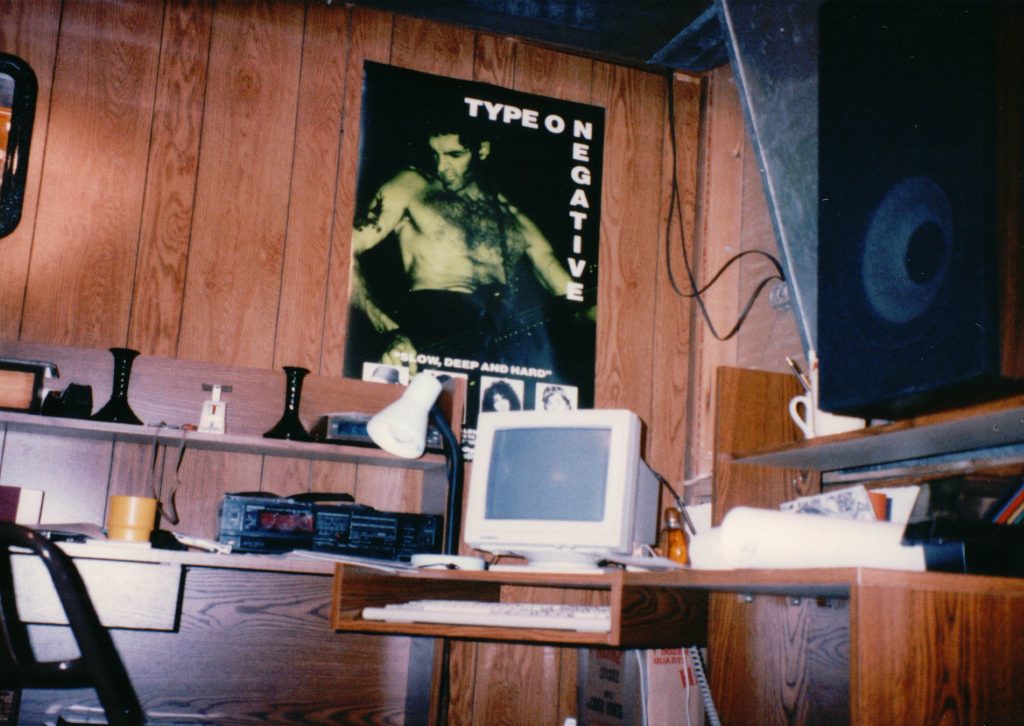 I worked at Montgomery Ward in the summer of 1993, and wanted to get a “real” computer desk for my next apartment. We sold these Sauder L-shaped desks which I thought were cool as hell at the time. This was before everyone had a PC in their house, so the computer hutch was still a somewhat new phenomenon. And this was before particle-board furniture got value-engineered to hell, so this was a pretty sturdy setup. I think it cost $150, minus my ten-percent employee discount.

This was in my room in my mom’s basement, shortly before returning to college that fall. More nice wood paneling, sporting a Type O Negative poster I got from my zine days. Other things I notice are the twelve-inch paperwhite VGA monitor I had for a few years, my Kenwood stereo and Panasonic speakers that followed me through college, and I see a bottle of Obsession cologne, from back when I actually thought that shit mattered.

This was my first real desk when I started writing later that year. I either sold it or gave it away when I left Bloomington in 1995. 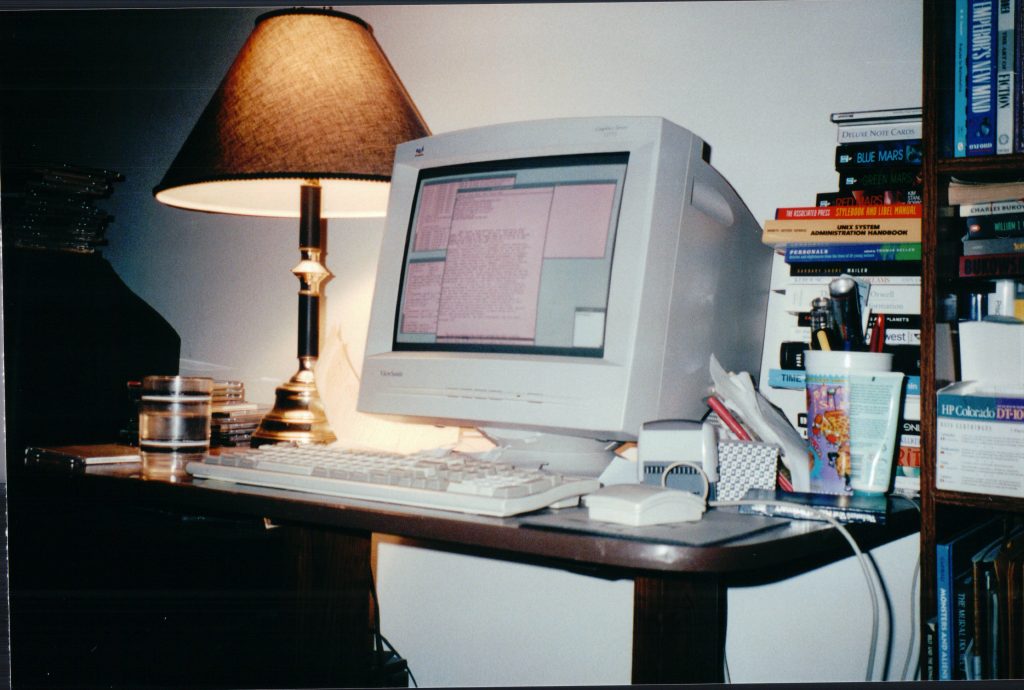 The entire time I was in Seattle, I worked on my old kitchen table, which was too small in area and too high off the ground. I’d upgraded to this ViewSonic color monitor, which was far too deep for such a narrow table. (Remember when monitors were more than an inch thick?) Other interesting (or not) things include a self-inking stamp for Air in the Paragraph Line Zine outgoing mail, and I spy a box of Travan backup tapes, when I used to back up my Linux machine to tape for some damn reason. You can also see my emacs setup on the monitor, with eyestrain-relief pink colors. I used the emacs text editor to write everything up until 2011 or so.

Fast-forward a minute (see the older post for other desks in between these) and here’s my work desk in 2001 right before I set it up for the first time: 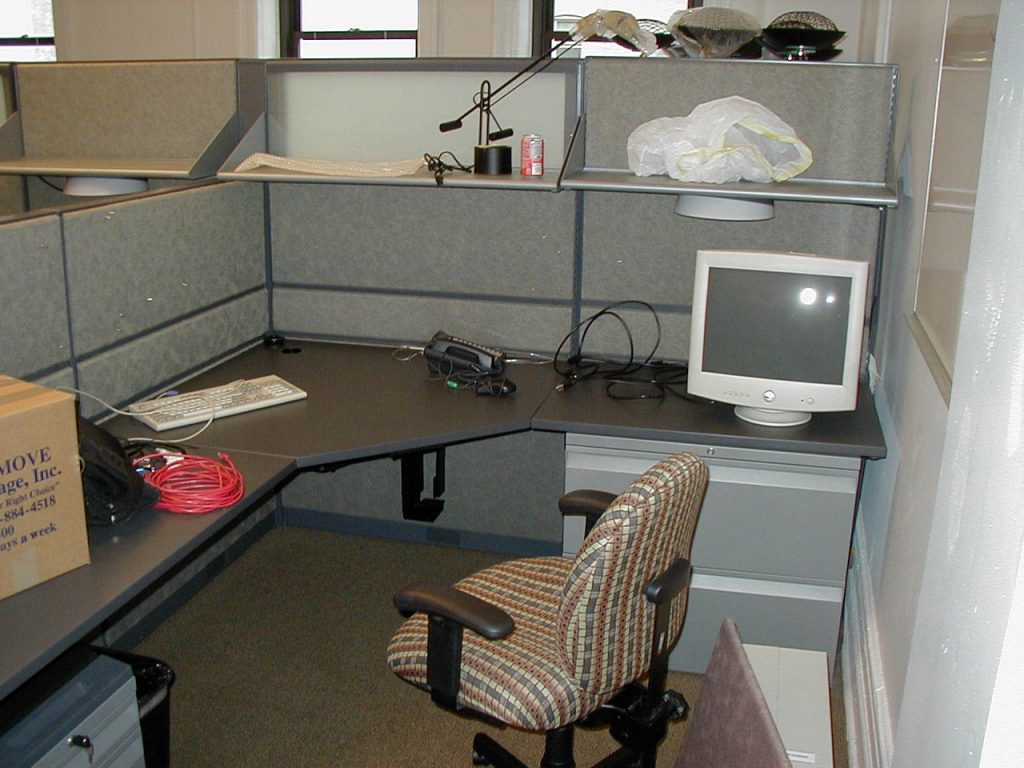 This was at my office at Bleecker and Broadway. We moved in there in August 2001, and I left in February 2007. I spent a lot of time at this damn desk in the early/mid-00s. The friend who just passed away was two cubes in front of this, so this pic is a little bittersweet. It was also taken a month before 9/11. Ugh.

When I went back to the company in 2010 and visited in December, the desk was vacant, so I got to set up and work there, which was bizarre. That filing cabinet was still there, and was locked. I still had the key. When I opened it, all of my files and printouts from the early 00s were still in there.

And to close, here’s a shot from last year, which is about current: 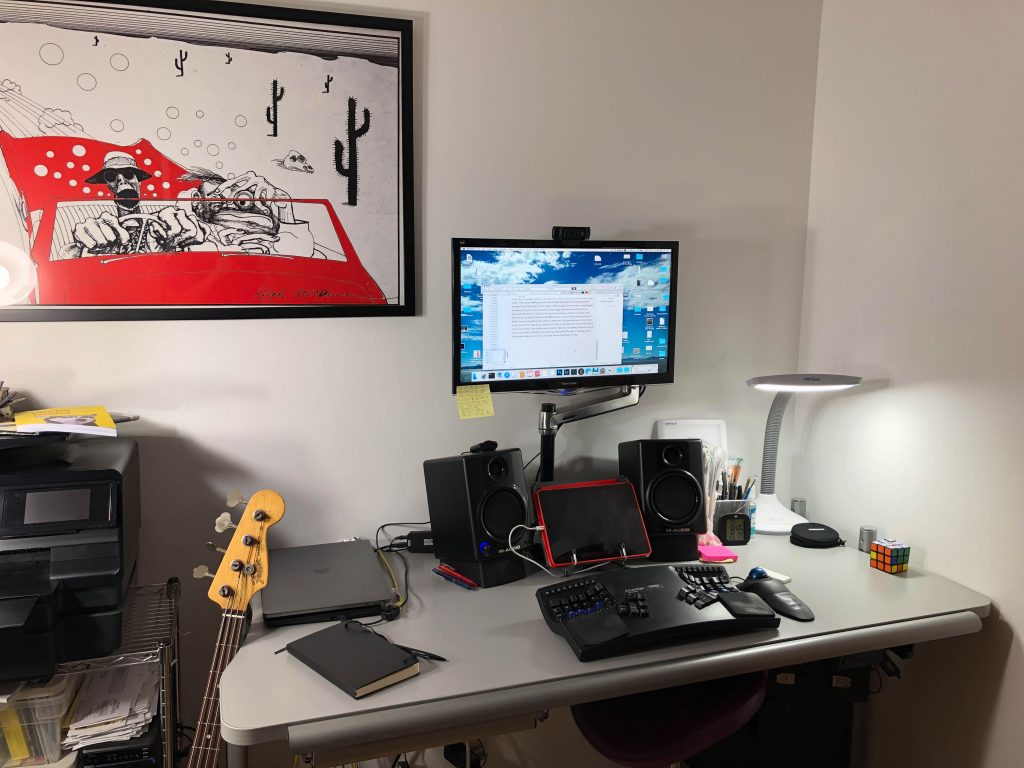 This is an Anthro cart I bought in 2010 when I started working from home. It’s not bad, although I wish I bought the one twice as wide, and maybe the matching filing cabinet. The only difference between this and 2020 is the Vanatoo speakers I just got. And the bass is usually in a stand. It’s also never this clean. This is both my work and home desk, so I spend far too much time here. It could use a bigger monitor. Maybe I should look into that next.