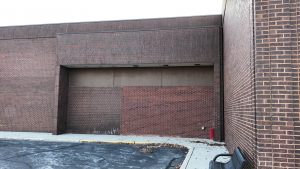 Exactly thirty years ago, to the day, I was here.

It was Christmas Eve. We closed at five. I was telling people we had no Nintendos. I probably worked forty hours that week. I’d listened to the same four-hour loop of taped holiday Muzak at least ten times. Mariah Carey was still waiting tables, so no, that song wasn’t on.

Today, I poked around what’s left of the Concord Mall, trying to visualize exactly where this was. The Montgomery Ward where I worked is gone now, having closed 18 years ago. The above picture is what used to be a door and a set of windows going in to the Auto Express department. Take a quick right, and you’d see me at a Nixdorf cash register, telling someone that no, we had no Nintendos.

Most of automotive is now a dentist’s office. Two of the bays, all of my old department, and a good chunk of housewares is now a warehouse-type electronics/appliance store. I went inside, and compared the layout of the poles and roof inside to some pictures I had from 1988 and more or less figured out where my department was. The warehouse store was empty, a ghost town. I talked to the manager, asked him if he remembered the Wards there. He didn’t. I don’t think he was alive thirty years ago.

The rest of the store is now a Hobby Lobby. I nosed around there a bit. You cannot tell it used to be a Wards at all. The area that used to be Electric Avenue is filled with floral arrangement kits, and “live laugh love” placards. I think their bathrooms are in the same place as the ones by the customer service center in Wards. I looked into an open door that led to their warehouse area. It’s the same warehouse where I used to unload trucks at six in the morning back in 1993. Same gray paint. I painted that warehouse at one point.

Santa was gone. The winter wonderland booth was already partly disassembled. Nobody was around. The mall closed at five. There is no way this mall will survive another year. It was supposed to be torn down in 2017. Maybe if the economy tanks and there’s no money to rebuild it, they’ll chain the doors shut and let it rot. I spent almost every hour of my time there for a formative decade of my childhood. Best case scenario, they will turn it into a storage facility. Maybe tear it down and build some soccer fields for the high school. They turned Pierre Moran into a strip mall, and when I was there today, every store except one was vacant. So no need for that.

I have been on such a heavy nostalgia trip, just wallowing in a horrible pit of memories. I drove by my old house today, saw my dead uncle’s house, cruised past my dad’s post-divorce single-wide trailer. I went to the dead Sears at what used to be Pierre Moran mall, stood in the parking lot where the mall once was, tried to figure out the layout of where things used to be. I went in the Big Lots that used to be the G.L. Perry department store where I’d buy Star Wars figures and Halloween costumes, where I first studied the Kiss Unmasked LP and wondered why the hell they took off their makeup. I went to the grocery store parking lot where my car blew up in 1991. They started remodeling the grocery, ran into asbestos, ran out of money, and abandoned it. There’s a lot of that around the area.

An old friend from New York messaged me this morning, and said she had stopped in Indiana to eat breakfast at a pancake place, asked me if I knew it. It was literally 1500 feet from where I was sitting. I ran over and talked to her for a few minutes. I think I last saw her in 2002. It was such a weird coincidental mindfuck. It was like walking into a K-Mart and seeing Iggy Pop and Gerald Ford playing Uno. It was a great surprise, but also fed into this weird nostalgia thing I’m far too deep into.

If you’ve seen Mad Men, you’ll know I’m ripping this off from Don Draper, and I’ll steal it from the Apple thesaurus to make sure I don’t screw it up. The word nostalgia comes from from the Greek nostos ‘return home’ + algos ‘pain’. After living in a dozen cities, it’s sometimes hard to say where home really is. But put me in a car in Mishawaka and tell me to go to the Tastee-Freez in Dunlap, and I will make every turn from one to the other without thinking. There is a deep familiarity there, things burned into my head, both good and bad, that are the basis for so many parts of my life. And revisiting that brings some pain I can’t avoid, that I want to continually revisit. I don’t want to move back here; I never could. But I have some sick fascination with going back to those memories, even as the physical world that formed them crumbles.

That night, thirty years ago, I got a ride home with a girl I had a crush on, because the starter on my car was broke. The next day, my family went to Chicago, stayed with my favorite cousins. We went to a mall that night and I saw the movie The Naked Gun, going into it blind, not even knowing it was a comedy, which was perfect. We drove back to my cousin’s after midnight in his 5.0 Mustang, blasting the song “Fade to Black,” which is an awesome song to listen to in the middle of the night on a highway in a big city in a fast new car. I was amazed that we were in a place so big and so cool that they played Metallica on the radio, and knew that someday, I would have to leave small-town Indiana. I was a senior in high school. I was getting ready to leave for college, start a journey that would eventually take me to the very end of that same highway, on the west coast, as far as I possibly could get from that point. That’s another story, another set of nostalgia points.

Anyway. It’s Christmas in 24 minutes. I have to Ambien out, see more family tomorrow. Hope your holiday is going well.