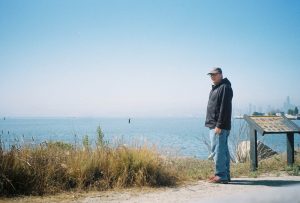 I got my first batch of film back from the shop the other day. I sent in six rolls, 36 exposures each, for a total of $76 for developing and a quick scan to CD.

The shots from this Vivitar I bought are tremendously weird. I mean, they look like they were all shot in like 1994. They have this weird, faded quality to them, a perfect vignetting, and just look old, way more than Hipstamatic or Instagram could make them. Like they all have this dreamlike, lo-fi quality to them, much more so than my old old 35mm gear does. The Vivitar has really good Series 1 glass, but a plastic body. It also has all-auto, no-adjustment shooting, but a modern motorized drive system to it. If it was just slightly smaller, it would be a perfect camera.

I wish I still had the original one. Or I wish I had an exact model number, another copy. This one is very similar, but not exact, which bugs me. But what’s weird is sometimes I forget it isn’t the same camera. I was walking around the Port of Oakland the other day with it, and thought how strange and nostalgic it was that the same camera I had for most of the Nineties was with me now, but then realized, it isn’t the same camera. That old camera went to a lot of strange places with me. It moved from Indiana to Seattle to New York. I have pictures from the Trinity test site where the first atomic explosion happened, from Vegas, from the Empire State Building, the Milwaukee Metalfest, Kent State, Bloomington, New Mexico, Boston, Disneyland, Washington DC, and hundreds of points in between.

Anyway, I dumped a few shots on Flickr here. That album also includes some old 120 film shots taken with a Diana F+.

Another topic: the Yashica digiFilm Y35. So a group in Hong Kong bought the Yashica name and did a kickstarter for a digital version of the old Electro 35 camera. The gimmick was that it was going to have this stuff called digiFilm, which was a little film canister you could swap out and change what kind of pictures it would take. Like you could switch to B&W, 1600, 6×6, whatever. You could also put a switch or button on the camera to do this, but they thought it would be a neat thing to make it “like” film. I thought it might be a fun toy, and the camera looked cool, so on a whim, I backed the Kickstarter.

Ugh, I hate Kickstarter. I’ve backed maybe a dozen things in the past, and maybe two have turned out okay. And I always feel like I get burned, and I always vow to never do it again, and then something comes up. And like clockwork, they met their goal, got their money, and then said, “Ok great! Now we’ll go design it!” and the wait began. There were a few sketchy updates, but it looked like this thing would never come to fruition.

Well, it showed up the other day. My verdict is that the camera is garbage. I think the appeal of the old Electro 35 was that it was metal and compact and had a certain tactile feel to it, like old rangefinders of that era. This camera is all plastic, and very cheap plastic. It’s light, and feels like one of those toy squirt guns in the shape of a camera you’d get from the Archie McPhee catalog. It has a non-operational film wind knob that’s molded into the top of the camera. The viewfinder has no optics, just a clear piece of plastic. The doors feel like they will break off in the next fifteen minutes.

The camera uses two AA batteries (not included) and an SD card (not included), plus the digiFilm thing, of which I received four. You then “wind” each shot with an advance lever, and press and hold a really cheap shutter button, and have to hold it and hold still for like a second and a half. The pictures look roughly like what my Windows Mobile cell phone took back in 2008. The B&W looks okay. The others, just use your iPhone and Hipstagram. It does marginally look okay from a distance. If I ever put my cameras on display on a shelf, it would look okay next to my Trip 35 and Canonet QL17. But, ugh. What a waste of money.

I’ve got another four rolls of film to shoot, and might stock up on more for the holidays. I should probably get some 120 film at some point and try that one again, too.