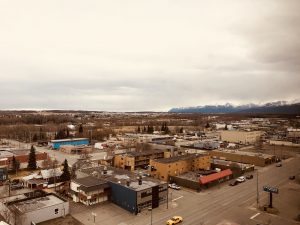 Hello from Anchorage, Alaska. I just got here last night, and my first impression is that is is really weird up here. Like Omega Man weird.

So, the trip up was fairly unremarkable. Quick flight up to Seattle, and that was unusual in that I haven’t been back to Jet City since I left in 1999. SeaTac isn’t really Seattle, and I did not recognize the inside of the airport at all. It looks like it has 100% changed, probably because Amazon is hurtling so many people through there  per day. I also never flew Alaska before, so maybe it’s a different area than I remember. I also didn’t get to leave the airport. There was just a hint of nostalgia that made me want to see more of Seattle, but I was in a rush to get from plane to plane, and I didn’t have a window seat, so I didn’t get to study the landscape on approach. Maybe I need to get up there on another trip.

The three-hour flight to Anchorage was a beast. I was in a middle seat, and the guys on either side of me were Wilford Brimley looking dudes who honestly should have been required to buy two seats. I was squished between them, and practically had to sit sideways. No computer, no iPad — I read for a bit (The Crying of Lot 49, not sure why I always re-read this on vacations. It’s a small book, I guess. Easy to carry) and played solitaire on my phone. For three hours.

When we landed, it took forever to get off the plane — lots of wheelchairs. But within the Ted Stevens International Airport, it was empty. It felt like an airport built to handle 100,000 passengers a day, and there were only twelve. And it was a long, long walk to baggage. I got my bags quick, then went down another long corridor — by myself, nobody there — and got to a Hertz counter, also with no line whatsoever. Got my keys, and there was no gate, no exit inspection, nothing. It was like the exterior of a small municipal airport, traffic-wise. Drive around the South Bend airport on a Tuesday afternoon, and that was Saturday night at ANC.

The drive in is surreal. Mountains in the distance, a slight chill from the 40-degree weather, and way too much open space. It’s a bizarre Twin Peaks trip. And then when you get into the outskirts of town, it feels a lot like Reno, the strange desperation of old motels turned into apartments, tattoo parlors closed for the winter (in April), and liquor stores. Then, downtown. And my stay at the Sheraton.

I dumped the car and luggage, then set out on foot to find something to eat. Anchorage has a downtown — there are normally about 300,000 people here. Most of downtown is small one and two story sprawl — you have to keep in mind the entire city was pretty much leveled in 1964. There are a dozen or so buildings taller than ten stories, almost all hotels, with I think a bank or an oil company of mirrored glass, the kind of early 80s office space you see appear when the crude starts flowing. But downtown is a lot of buildings that sort of appeared because of tourism or seasonal work at fisheries and oil fields. And it has the same density and feel as a city like South Bend, but maybe three times bigger.

I walked around, trying to find some place to eat, and it was absolutely vacant. Like, post-apocalyptic. I saw nobody on the street. Nothing was open. The tourism business doesn’t really start for another month, so a lot of small galleries and shops are still closed for the winter. And there isn’t really that much density, like not a lot of little restaurants and things.

Also, the light. It is currently daylight until about ten at night. But it’s a really bizarre daylight. I don’t know if it was the clouds or the longitude, but the daylight has a strange glow or cast to it, like you’re shooting photos with the white balance set on the wrong setting. It reminds me of what the sky looked like during the wildfires last year. It only reinforced the strangeness of the situation.

I ended up going to the Fifth Street Mall, because of course I’m going to fly thousands of miles to a mall. It’s a strange setup, a Simon mall with a JC Penney’s and a Nordstrom, but not that long of a concourse, and multiple levels (I think four). There was nobody there, except super aggressive panhandlers, and lots of security trying to get rid of them. The top floor is a large food court with windows around the perimeter, looking out to the mountains in the distance. But all the food is weird local chains, wok shops filled with MSG, and off-brand taco places that guarantee botulism. I walked back to the hotel, got room service, and went to bed at like ten, when it was still mostly daylight outside.

The plan for today is to go to the Arctic Comic Con. I’m not really a fan of comic books, and I really can’t deal with people jerking off all over themselves about the latest Marvel movie that I refuse to see. But I figure if it’s here, I should go. Cultural experience. Why not. I think the weather is supposed to be okay tomorrow, like 37 and clouds. (It’s a touch colder today.) So maybe I’ll drag the camera to the top of Flattop and get some pictures.

I should figure out where this convention is, and what I can bring. I don’t want to drag a bunch of camera gear and then find out you can’t bring it in. Also need to find out if they have corn dogs.