We’ve had unreasonably nice weather all weekend, sunny and in the seventies, perfect for walking. I went to Walnut Creek yesterday to get in the daily miles, and eat at Veggie Grill, this overly bright and cheery vegan place, which I thought was only in LA, and I used to eat all the time at the one in El Segundo. The weather, and the fact that the ten-year anniversary of the move from Denver to Playa Del Rey is coming up has given me a strong sense-memory nostalgia for my brief time in Los Angeles, and I always try to find different places to walk that remind me of Southern California.

Walnut Creek is a point of scorn for a lot of people in the Bay Area, because it’s not “real” and most of the housing is either those same three-story townhouse apartments they build everywhere, or is multi-million dollar stuff hidden in the hills. There’s no ghetto or dead people in the street or graffiti, and that’s a little too Disney for people. I don’t know if this would have bothered me when I was younger, but it’s fine by me now, whatever.

There’s also a weirdness to Walnut Creek in that a lot of neighborhoods can be defined by the businesses they have that would not survive in any other neighborhood. Like if your neighborhood has multiple computer repair shops, it sets the demographic. In my neighborhood, if your computer is broken, you throw it in a pile of garbage on the street, and break into someone else’s house and steal a new one. West Oakland also doesn’t have multiple piano stores. When you mention that a neighborhood has a Steinway showroom, you don’t need to say much else to describe it.

After lunch, I wandered through Broadway Plaza, which is an outdoor mall anchored by Nordstrom, Macy’s, and Neiman Marcus. It’s very upscale, very clean. There’s a Tesla store. You could probably perform surgery on the ground, it is so clean. Everyone looks like a yoga model. It’s a very strange place. And as I was walking, I passed by… an Amazon store. 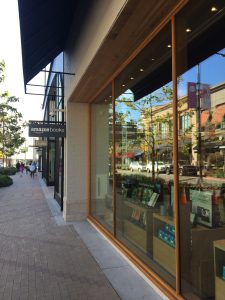 I’d heard a bit about this experiment. In a strange twist of fate, the University Village shopping center in Seattle got one of these, the first one, right after the Barnes and Noble there closed. I haven’t been back to Seattle in almost twenty years now, but back when I was single, broke, and had no TV, I went to this B&N pretty much every week. It was a massive two-story thing, with a big cafe, a full record store, lots of fiction, open late, the whole nine yards. That outdoor mall was doing well, but B&N had lease troubles in 2011, so it went. (Oddly enough, Veggie Grill took over part of their space. Or maybe it’s the next building – the area has been so overdeveloped, I can’t recognize it anymore.)

I had to go inside. And… it was weird. It is a real book store – paperbacks, hardcovers, a magazine stand. There’s a Peet’s coffee bar, and a ton of space dedicated to the Amazon electronics ecosystem: Kindles and Fires and Alexas and whatnot. There was an Amazon Basics section, in case you needed a cheap HDMI cable or battery. And… books. Actual books. Like, the smell of brand new books, something I barely see anymore, especially since most of Barnes and Noble these days is filled with calendars and Lego and dusty Nook displays.

Not only was this a time machine to a different place when book stores were a big thing, but it was a specific time machine, because this place looked like a bizarro Borders. There are differences – Amazon has polished concrete floors, and a slightly darker look, while Borders had the light gray carpet and more light wooden shelving. But I’d imagine if Borders was alive now, their stores would have moved from the early 00s look to this new style.

What really threw me is that the signage is really similar. Maybe it’s mandala effect, but Borders had these black signs hung from the ceiling, with their distinctive sans font laying out the book sections, music, etc. Amazon has similar dark signs with white letters, in their familiar serif font. It’s strange, because the font and design is burned into my head from using the Amazon site for years, but it’s on the signs in a physical store. It’s like waking up in an alternate dimension where the Nazis had won the war, walking into a McDonald’s and seeing the familiar menu in all German.

The store isn’t big – maybe 5,000 square feet of retail space. It didn’t have tons of couches and chairs like a late-90s lifestyle book store. But something about the layout, the look of so many books on shelves, and just the smell of fresh paper, made it seem inviting. The staff was overly helpful and nice, and they had some discount system for Prime members, although I’m not sure how it worked. Granted, this is like a flagship store in a very upscale mall; by the time it filtered down to where they had an Amazon store in Kalamazoo or something, it may be a whole other experience. But it was interesting.

It is a can of worms, though. On one side, there’s the strong fear that Amazon is Walmart-izing the current landscape, dropping in stores to kill off the last of the brick-and-mortar. (Side note: it is Walmart now, officially; they finally killed off the hyphenated spelling of the parent company. Copy-editors rejoice.) On the other hand, it seems like Amazon has grasped onto the fact that book buying has a tactile or community experience that people miss. I don’t go to Walnut Creek often enough to shop at the store regularly, and I wouldn’t have minded if it was twice as big with a bit more elbow room. But I could definitely see popping into one to pick up a charging cable on the cheap, and maybe a top ten book.

The Borders thing really gets me, though. I was just thinking about this because Anita Dalton’s book TL;DR closes with a long thing about the death of Borders. (Buyer beware: it also contains a review of Sleep Has No Master.) Like her, I have many specific memories of Borders. I had a friend who worked at one in New York, and we used to go and get steep discounts on armfuls of books. They had a good location in the WTC, which of course is now gone. Another friend who was a manager at a location in Indiana got my first book into their store, probably one of the few times you could buy my stuff in a brick-and-mortar. And I spent a lot of 2007 going to the one in Stapleton in Denver, looking at computer books, baseball books. The last book I bought at Borders, at the one here in Emeryville, is the Philip K. Dick collection of five novels from the 60s and 70s, which is a mindfuck on its own.

But yeah, it is strange for me to think of Borders being gone. And then more strange to walk into this alternate reality Borders, run by the company that is at least partly responsible for their downfall (among many other things, of course…) and see actual books for sale again. Just bizarre.