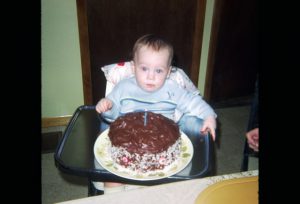 I was trying to think of what numerological or nostalgic significance this number has, and I can’t think of any, really. 47 is such a weird number. It’s slightly dreadful to me, because it’s in the “almost 50” range, and I’m really not ready to go there yet. I still think of myself as a bit over 40, and I’m closing in on the half-century mark.

47 reminds me of 17, which is that oddball birthday of your teens, the one of least significance. When you’re 16, you can drive; when you’re 18, you can vote and get married and join the Army and whatever else. At 17, you can… see NC-17 movies, I guess, although we didn’t have them back then. (They were added for the Henry and June movie, which came out when I was 19.) I don’t even remember what I did on my 17th birthday, if anything.

My birthday, even more than New Year’s, makes me look back at the last year and think about what I need to do in the next year. I can’t say much, good or bad, about year #46. I wrote a lot but didn’t get much published. I walked and hiked a lot, but didn’t lose any weight. I worked a lot, but don’t feel like I got a lot accomplished. Stasis, I guess. I didn’t have a bad year, but it has me thinking a lot about what I should be doing.

I’m actually cheating, writing this a few days before the actual day of my birthday. It’s a Saturday this year, so I don’t have to fight to get the day off work. I was going to do another superfloat in the sensory deprivation tank, but had to cancel, so it’s probably just another Saturday of writing and walking. No Vegas this year, unfortunately. No Denny’s, probably. No hospitals, no layoffs, no funerals. (I hope…)

So, I’ve outlived JFK. David Foster Wallace. Fatty Arbuckle. HP Lovecraft. It’s good to be alive, but then I also look at what I’ve done so far, and think there needs to be more. So I need to get to work on that.