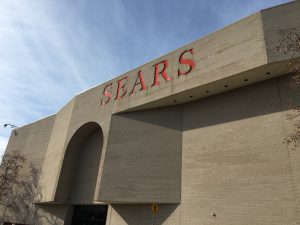 Had the day off yesterday, and I’m still trying to keep this walking thing going, but the weather’s a bit off here. (Not as bad as it is in the Midwest, but still.) I’m getting bored of the usual malls, so I decided to head to a new one out in Marin, which is oddly named Northgate.

Why “oddly?” Well, Seattle’s big mall is named Northgate. It’s one of the oldest indoor malls in the country. Now owned by Simon, it has had several major expansions and remodels, plus the area surrounding it has grown considerably. I spent a lot of time there during my Seattle years, and it was more or less my default mall.

The Northgate mall in San Rafael is a little different. It’s actually pretty close to my place, maybe a thirty-minute burn across the bridge in Richmond, and on into Marin. It’s nestled in the hills about a dozen miles north of the Golden Gate Bridge, an area filled with trees, very quiet and secluded.

The mall itself is not huge: a single floor, about 700,000 square feet, a lot of that being in the three anchors. It’s a corridor mall, a single straight shot, with a few dozen stores. It’s clear this used to be two rows of stores, with a hasty roof thrown over the middle to enclose the center. The interior still feels a bit exterior, with concrete floors, monstrously high ceilings, and an “open” climate to it. It’s not exactly comforting, and the concourse is not that big. It’s got two cavernous food court/common areas on the east side, each the size of an aircraft hanger, both largely empty. The interior food court is maybe four booths, and very sedate.

The anchors include a Kohl’s in a neighboring building (which I didn’t see; Kohl’s is Kohl’s), a Sears, and a Macy’s. The Sears is interesting on the outside; it looks like it was built with the original mall in 1965, and has that early Sixties light brick look, plus old-school old Sears logos in red. The interior of the two-story looked very run down, like it hadn’t been touched since 1987. It reminded me of the downtown Oakland Sears that was shuttered, gutted, and turned into office space for Uber (who have since flipped it, and it hasn’t opened, but that’s another story.) The Macy’s was okay. The rest of the stores inside were pretty uneventful.

The mall was gutted and redone in 2008, which is probably when it was given its current livery. It looks like they tried to make it look upscale, like a ski lodge, to attract high-end luxury tenants. If you read the Yelp reviews, people are nostalgic for the 90s look and population of the mall, when it had a book store, an arcade, and better fast food. The only pictures I could find of the old version of the mall look very Peak Mall, like it had been designed in 1993 or so.

One odd feature of this mall is the Century Movies theater. It is plopped down in the middle of the concourse, right before Sears. It’s almost as if they took an existing movie theater, split it in half, and kit-bashed the two pieces on either side of the hall. I was walking down the bare concrete and abandoned stores, then was suddenly on the red carpet of a movie theater, with the smell of popcorn in the air, posters for the new Star Wars all around me. Then, twenty feet later, back to concrete.

There’s also a bunch of food of the 2008 era of mall-building, perched on the west side, facing outwards. There’s all the usual suspects: Panera, Chipotle, BJ’s, Applebee’s, etc. These all seem to be doing well.

The mall was a bit of a bust for walking, although the weather was nice and sunny, so I walked outside, and that worked fine. The mall doesn’t feel like a dead mall per se, like one filled with brown tile from 1974 and a non-functional brick fountain in the middle. But it has a strange, vacant, surreal feeling to it. And who knows what will happen to it, once the Sears shutters. It’s not on the latest list, but it doesn’t look great.

Anyway. The trip was interesting, but it made me think too much about the other Northgate, which was a bit of a bummer. I haven’t been back to Seattle since 1999, and keep thinking I should visit, but I’m a bit scared to see what I will find.