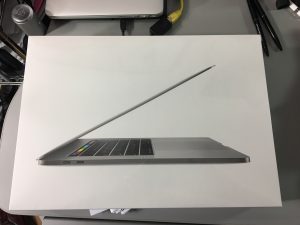 Well, it was time. The Retina MacBook Pro I bought in 2014 reached its retirement, and I got a new one. This one did not have a spectacular death or great failure, but it was getting up there, so I decided to swap it out now, while I could afford it.

Two computers ago, the mid-2010 model I had lasted four and a half years, but had some major problems along the way. It was from the first batch of the dual-GPU machines, and had the NVIDIA curse, which meant two mainboard replacements (within warranty.) There were also two battery replacements, one in warranty, and a later one on my own. A fan crapped out at one point, and I lost one of the rubber feet, and molded a functional but ugly replacement from Sugru. To be fair, I thrashed the hell out of that machine, put some serious miles on it. I still have it, and it still runs, but it’s at the point where the OS doesn’t get updates anymore, and there’s no good browser for it.

The 2014 was a step down in some ways: it was a 13-inch, as opposed to the 15-inch one. It had an i5 as opposed to an i7, and integrated graphics only. But, it was light as hell, very easy for travel. The retina screen was great. And I had no maintenance issues, no repairs, no service, nothing. My only complaints were that the battery is slowly going, maybe 85% of engineered capacity, but losing maybe a percent a week. Its half-terabyte drive was getting pretty crammed. And I was scared to update to High Sierra and break everything, so it stayed at El Capitan. So, no real complaints, but time to move forward.

The bad timing here: my work computer went sideways about a week ago, requiring two trips to Palo Alto to get it wiped, and re-wiped, and re-re-wiped. It got hung up on a Windows 10 update bug, where it would download six gigs of data, spend half a day updating, fail, restore itself, then immediately start the process again. I ended up getting a newer machine, which also had to be wiped/updated, but the whole thing was a giant reminder that I do not like dealing with Windows 10 machines, not that I have any option to migrate all my crap to a machine that doesn’t run any of the programs I use.

Probably the biggest pain in the ass is the port issue. The machine now has two Thunderbolt 3/USB-C ports on each side, and a headphone jack on the right (wrong) side. My home setup involves Ethernet, DVI video, and a USB hub with two USB connectors for keyboard/mouse, another for an IR receiver, and then whatever phone or external drive I need to periodically plug in. So, the dongle situation: a TB3 to ethernet; the “AV connector” which has USB/power in/HDMI; an HDMI to DVI; and the existing USB3 hub. I also got a USB-C-to-USB connector for whatever odd thing I need to plug in. And I’m using a USB audio DAC into my monitors. So, two plugs. I thought about a Thunderbolt dock, but they all seem a bit half-baked.

I think the usual screed here is how horrible it is that all ports are going away, Apple is a bunch of fucking evil communists, I can buy a $500 plastic Asus machine at Best Buy that has tons of ports, etc. My general thought is that TB3 is the way to go – much higher throughput, daisy-chainable, and one universal connector. The problem is all the shit that doesn’t use it. But I’ve got that figured out, so, done.

The machine feels a bit heavier, but bigger. We’ll see how it travels, since I am gone next week. Also not sure on battery life, but they tend to get better with each iteration. The keyboard is different. It has Touch ID, which is a little weird, and not that consistent between apps and stuff, but it does work well. Siri is fairly useless on the Mac. I run the machine clamshelled most of the time, so the new touch bar thing is not even on my radar.

I started setting up the machine by hand, copying over files and reinstalling everything, then realized I was going to screw everything up, break my mail or iTunes or whatever. So I gave up, blanked out the machine, and fired up Migration Assistant. I wired the two machines directly with Ethernet, and about two hours later, it finished, and was about 95% set up. Lost a day of writing, but I lost almost two weeks on that Windows 10 machine, so, yeah.

And once again, important PSA: BACK UP YOUR MACHINE. Get an external drive, clone your entire machine on it, and keep doing it regularly. Or use CrashPlan or BackBlaze. Or do both. I didn’t run into any backup issues this time, but seriously, if you have a computer, you need to back it up.

Anyway, happy firestorm or whatever you celebrate.