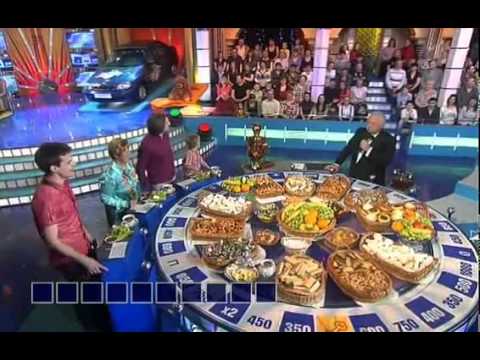 I don’t know how I got to this, but I’ve been borderline obsessed with the Russian version of Wheel of Fortune, which is called Pole Chudes. I do not speak Russian, and can’t solve Cyrillic letter puzzles, but the fascinating thing about the show is how little it has to do with the actual word game. Also, this show is Russian As Fuck, which I greatly enjoy.

I really like watching foreign TV I can’t understand, and find things like the tone of the announcers and commercials to be unintentionally hilarious. When I was in college, my pal Simms was friends with these guys who were maybe music majors or in a band. Their house was cool as hell, because the basement was covered in egg carton crates and soundproofing blankets, and they had a bad drum set and a bunch of shitty instruments, like old Teisco guitars and band instruments and toy synthesizers, and we’d go over there and beat the hell out of everything in a total noise symphony. Anyway, one of the guys worked at Sahara Mart and had a copy of the Bollywood movie Raja Babu, the VHS tape complete with TV commercial breaks, and I got a dub of it. The spectacle of a Bollywood musical and all the dance numbers is one thing, but I also thoroughly enjoyed the commercials for various pre-made curries, rices, and banking centers. And falling down a YouTube k-hole looking for Russian game shows brings on a similar experience.

A few brief thoughts and observations on the show:

I can’t explain it any more except to say it is Russian As Fuck. There are a lot of full episodes on YouTube, but for a good overview, go straight to the 1TV web site and watch this minute-long teaser: http://www.1tv.ru/sprojects/si=5810

The process for getting guests is by the date of public holidays and commemorative days. Thanks to it Soviet past, Russia has many.

Like Railway Troops Day, Day of Advertisement industry Workers, Fatherland’s Heroes Day etc. Pretty much every profession has one. Not every day is a public holiday. There is even a day for the missile forces and artillery and customs workers.

I think on first of April, they usually invite people related with gay issues. I’m not kidding.