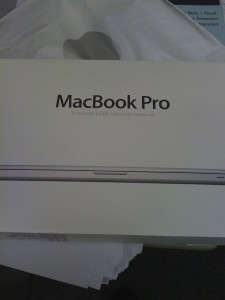 It wasn’t a full-on, catastrophic death, the kind with no backup and fire and smoke and no hope. It was more of a long goodbye. I replaced the battery last fall, the third battery in its almost five years of heavy use. It looked like the battery was holding a full charge, an app saying it had low cycles and high milliamp-hours. But it would lose a few percent per minute, and then would get down to about 20% and power off with no warning.

I thought this was one of those background-process-sucking-power things, like some damn Adobe vampire lurking in the shadows, constantly pinging home and scanning every file on the hard drive. I tried killing everything imaginable, and then tried a fresh install, zapping the NVRAM, resetting the SMC. After a 24-hour marathon of file copying and reinstalling, it died on 90% battery.

I bought this computer in 2010, in the spring. I jumped on board right on the first day of the new model, when the first i7 Macs appeared. I remember this well, because it was right after I switched jobs and left Samsung, so I worked in Palo Alto. I was in a funk, writing-wise, trying to pull back out of a long stretch of not doing anything except writing every day about how I could not write.

I drove to the Apple store in Palo Alto on my lunch hour to buy the computer. They had them in stock, and $2500 later, I had the top-of-the-line 15-inch MacBook Pro. I took it back to my cube, unboxed it, snapped photos, and took a quick look. Then it sat on my desk while I stared at it, waiting until the end of my shift for my long commute back to the house. Then I plugged it into my old Mac, and did the eternal wait for the migration assistant to slowly slurp all of the files from one hard drive to another.

This was both exciting and sad. I had an unusual attachment to my first Macbook, one of the 2007 white plastic not-Pro Macbooks. I wanted a new laptop bad, but wasn’t working that summer. I was sitting on a bunch of junk after we moved to Denver, though – things I could easily dump on eBay. There were years of bachelor-mode acquisitions ripe for the picking: collectible coins, old electronics, DVD and CD box sets, and a bunch of barely-used gadgets and trinkets. I spent the first part of the summer unloading all of this on eBay, making sales and watching auctions and driving to the Denver post office to ship off boxes and packages to far-off buyers around the country. The PayPal balance grew, and by the end of June, I got within target, and orderedd my new machine. I then watched the tracking number, as the machine left China, went to Anchorage, and then jetted down to Colorado. I loved that machine, and it went with me everywhere. It also represented that odd, brief period of 2007, a period of nostalgic landing I always want to visit again.

That machine got quickly retired for its more powerful aluminum unibody sibling. And by the fall of 2010, I started working from home, and got a lot more serious about writing. I can’t thank the machine or the schedule, but launched into a new mode of writing and publishing. And that machine was at the center of all of it. Since I got that MacBook Pro, I’ve published five books (plus republished another) and probably written a half-million words, easy. I also used it for a lot of photography, video, music, and other work. It’s been a real workhorse, and I’ve become very attached to it over the last four and a half years.

That Mac has held up well, all things considered. It did have the dreaded NVIDIA curse, though. That was the first model with a discrete video processor on the logic board, a second GPU that it could switch to for heavy processing, or shut back off for better power use. And a lot of the machines had bad failures. Mine started to crap out a few months in, and ended up getting two logic board replacements, along with a battery replacement because of a recall issue. I doubled the memory, and moved to an SSD. But otherwise, the machine ran well, and lasted longer than any other laptop I’ve had.

I managed to bring that thing everywhere, too. It went to Europe twice; the Midwest a bunch of times; work trips to New York; Hawaii; a bunch of trips all over California. I got a lot of writing done on the road, because I used it as both my desktop and portable. It got scratches and scuffs, but that aluminum case kept it together, and still looks decent.

The battery thing was the kicker, though. I don’t even know if the battery itself was bad, or if it’s another logic board flake-out. It’s still a decent machine, CPU-wise, although the lowest-end MacBook Air now benchmarks higher than the 2010 top-of-the-line. It didn’t have USB3 or Thunderbolt, and had the slower SATA bus, so the SSD drive didn’t work at full speed. I also could not increase the RAM any more than 8GB, and it would not mirror its display to an Apple TV. I seemed to get in at exactly the wrong time, when all of these technical innovations were showing up. It was a great machine, but it was starting to show its age.

After yesterday’s death, I gave up, ran to the Apple store, and bought the latest MacBook Pro Retina. I went down to the 13-inch model, which feels insanely light and small compared to the old one. I’ve spent the last day porting things over, and it’s such a huge improvement in speed. Plus it’s got USB and Thunderbolt, and gigabit ethernet, and the Retina display is insanely nice. Most importantly, I’ve been working for an hour now, and the battery is just down to 97%.

So, start of a new era.  And PSA: BACK UP YOUR MACHINE. Go get a CrashPlan account, drag your important stuff to Dropbox, and get an external drive.  Get two, they’re cheap.  Now, on to the next era of writing with this new toy.