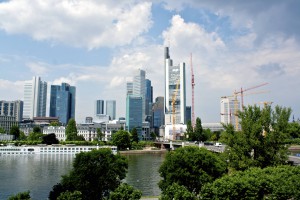 Went to bed at 8:00, Oakland time, and woke back up at 2:00, unable to sleep, so here I am, digging through the piles of trash from my luggage, trying to return the gadgets to their daily configuration so I can get back to The World by Monday.

The flight back yesterday was decent but long.  We boarded at about 1:00 Frankfurt time, and I had a “business economy” seat, which is slightly bigger than a coach seat, but still in a 3-wide row, with no special plugs or media viewers or amenities, beyond the meal that almost looked like chicken, and a dollar’s worth of Cokes.

Frankfurt was good.  It’s a weird city, trying to hold onto the past, while also trying to radically build itself into a Zurich-esque financial center, which in some senses it is.  I was struggling to name a sister city in the US with the same kind of feel and dilemma, and the best example I could think of is Charlotte, North Carolina, which is the second-largest banking center in the US, with rows of shiny chrome buildings downtown, and then sixteen blocks later is failed tobacco farms and abject poverty.  I don’t know what it’s like outside of Frankfurt, but I do know they have struggled over the years with their identity and people have pushed back against the image of “Mainhatten,” but the skyscrapers make it an interesting contrast to a lot of other European cities.

I’m not really in the mood for travel writing at 4:37 AM, so I’ll plow through a quick list of highlights:

I ate a lot of asparagus for some reason.  Lots of sausage, too.  I am glad to be back on a regular diet.  It will be nice to get back to a regular sleep schedule, too.

I have a thousand pictures to sort through.  I’ll get to it.  First, back to writing.