Here is a receipt I found recently: 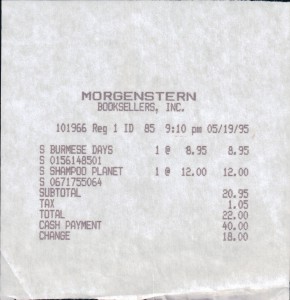 Morgenstern’s was an interesting book store in Bloomington that came and went in the 90s, but was pretty central to my experience at IU.  I don’t remember exactly when they opened, but it must have been around 1991 or so.  There were no big box book stores then, aside from the Walden’s in the mall.  The town had no shortage of used book stores filled with old books dumped by students in need of ramen or beer money, and I spent many hours digging through them for anything interesting, but Morgenstern’s was where I went to score the latest new stuff.

I never read or collected that many books prior to becoming a writer, but I still went to Morgenstern’s to look at computer books.  They were the only place in town other than the IU bookstore with a solid collection of all of the latest O’Reilly stuff, so that’s where I went to ogle all of the C++ and Perl books.  They also had a full newsstand with a lot of obscure zines, so when the zine bubble was happening in the early 90s, that was the place to grab Factsheet 5 and all of the other rarities.

Once I did start writing, all of my obsessions came out of this place.  Between 1993 and 1995, I bought pretty much every Orwell book; every major Henry Miller title; almost all of the Vonnegut books in one quick swoop; and I bought my first Bukowski there.  I got going on Douglas Coupland and Henry Rollins, too.  They had a punch card system, where you got I think a punch for every ten bucks, and if you got ten or twelve punches, you got a free book, so any time I had spare cash, I’d walk out there and try to do as much damage as possible to those little pink cards and earn some freebies.

Morgenstern’s was in this strip mall just east of the main College Mall, a place that also held a laundromat, a Service Merchandise, and a couple of other stores.  There was a cheap Chinese place there (Grasshoppers, maybe?) and many times, I’d buy a couple of magazines, and then get some fake Sweet and Sour chicken and sit down to read.  They also had a Long John Silver’s, which served a similar purpose.  Morgenstern’s had its own big comfy leather chairs and coffee bar, so you could also crash out there and page through books, which was somewhat of a novelty at the time.

I vaguely remember this 1995 trip to the store, although I vividly remember the weekend.  My friend Larry Falli had graduated, skipped town, and left me his apartment for the rest of the month, as a place to write or crash or whatever.  I bought those two books on Friday night, and stayed up all night reading Shampoo Planet by Douglas Coupland, and liked it enough that I wanted to go get a copy of Generation X.  I went to bed right before daylight, woke up at lunch, and jumped in my car to go back to the mall and grab a copy, but a few blocks away, my car inexplicably died.  I had to get it towed to this auto place out by the mall, and it turns out the timing belt had snapped, and they had to keep it a day or so to put a new one on.  So I walked over to Morgenstern’s, got a copy of Generation X, then went to Larry’s unfurnished and vacant apartment, and sat on the floor of the living room with a bag of takeout from somewhere, reading the Coupland book and writing in a notebook.  I then walked the three miles back to my place and got started on the Orwell I’d bought the night before.

A month and change later, I flew out to Seattle, got a job, then flew back, packed up a U-Haul, and left Bloomington.  Not long after that, Borders put in a store right next to Morgenstern’s, and Barnes and Noble built a megastore just across the street.  And not long after that, Morgenstern’s was having their big everything must go sale.  And now the Borders is gone, and I’m sure the B&N does slow business selling lap desks, bookmarks, and the occasional 50 shades book.

I still find these receipts tucked into books, though.  And I’ve got a few titles on the shelves that still have their dot matrix-printed UPC stickers on the back corners.  I even have a punch card with two punches on it, which will never get filled.  It’s a bittersweet end to this old place.