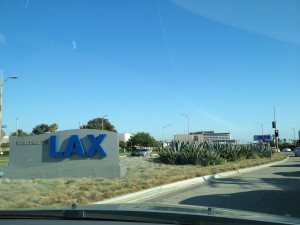 I had an unexpected trip to LA last weekend.  It wasn’t unexpected as in bad; S had a Monday work thing at the last second, and she extended it and I tagged along, leaving Friday after work and coming back Sunday morning.  I always like to go to LA, although the trips are always far too short, and it always leaves me with that hollow feeling that maybe I should have stayed there instead of moving up north.

Anyway, we stayed in Long Beach this time, a new one for me.  I think I went to Long Beach once when we lived down there, on a trip to bring the Subaru to the dealership for maintenance, and that was way the hell north, up by the Long Beach airport, and not really in the city proper.  The actual city, on the water, reminds me a lot of San Diego.  It has the same kind of modern openness to it, a downtown that’s been scrubbed clean and revitalized, the new businesses poking through in the main drag of older buildings.  Our hotel sat by the water, among this strip of chain big-box restaurants and carnival rides and roller coasters, a fairly sterile convention center vibe.  Outside our window, a massive Indian wedding happened Saturday morning, the whole nine with the saris and the white horse and everything.  Later that day, some kind of bible convention was going on, so we got two very different vibes going on during the stay.

We landed at LAX just in time to hit the rush hour traffic on Friday, so we went to the Veggie Grill in El Segundo.  I spent a lot of time in that area when we lived in Playa Del Rey,  because that main drag on Sepulveda had our grocery store, drug store, bank, Petco, Frey’s, and a host of other regular destinations.  The Veggie Grill is this place with all vegetarian food that’s got fake meat in it, but it isn’t like most health food stores, which are typically these run down retreads of 70s hippie joints, with dim lighting and patchouli smell and a shelf of strange astrology books about fasting and crystals.  It’s a very modern-looking place that resembles a Chipotle more than anything, with lots of bright colors and a smart interior.  I got this huge kale salad and sweet potato fries, and gorged on that stuff, wishing I could eat there every day.

I always associate LA with healthy food, because it’s where I lost so much weight, and if you want to do a vegan, gluten-free, macrobiotic diet, it’s the place to do it.  But it’s also interesting, because it’s the fast food capital of the world. I mean, you don’t see all of the people who live on it 24×7 in morbid obesity, like you do in the Midwest.  But everywhere on the main drags through town are taco stands and burger joints and diners and every possible chain you could think of: In-n-Out, Jack in the Box, Rally’s, Fatburger, and all of the usual ones.  I guess I started my 2008 stay in LA eating everything and everywhere, but then graduated to just the healthy stuff.  It’s really both ends of the spectrum.

On Saturday, we ate at a mostly forgettable omelet place in Long Beach, then went on a long drive into Orange County to see a friend of S’s.  We drove back into Culver City to eat at Leaf, this raw food place.  I’m not a huge advocate of raw food, and I think some of the claims are dubious, but I also like it when it’s done right. I first found out about this place because I arrived in LA for a week-long apartment hunting mission back in 2008, and stayed at a crappy Econo-Lodge right across the street.  I went there a few times that summer, and even when I was on a fries-and-burgers diet, I always liked the food there.  Unfortunately, the place is closing down this week – they are razing the whole block and building a giant apartment complex.  But we got there just in time, and I had a falafel and a sampler plate of hummus and chips and rolls, and although the service was terrible, the food was great.

That’s one thing that’s always night-and-day for me when I go back to LA.  Oakland can be a real shithole when it comes to urban renewal.  Like our neighborhood doesn’t even have a grocery store, and every time someone starts talking about building one, it always gets derailed with discussions from causeheads about whether or not it will have locally-sourced organic nut-free options serviced by transgendered indigenous peoples or whatever the fuck, and it drags on for years.  There’s something fundamentally broken in Oakland’s zoning or local government, and I think it prevents any development or major investment in the city.  Right across the line in Emeryville, things have absolutely exploded with new development and businesses and construction and offices and jobs.  The only thing we’ve seen new in our neighborhood is a tent city full of homeless people that shit in a field next to an overpass.  I think when we moved here, I had high hopes that the neighborhood would get gentrified and cleaned up, and five years later, I have pretty much given up hope for that, and drive to Emeryville or Berkeley for everything.

Anyway, when we’re in LA, I always see that insane urban development, with every square foot suddenly spouting up new businesses and mixed-use developments.  On one of our previous trips, I think 2011, I was on a sort of depressive riff in my head about the economy and state of the union, and we went to Santa Monica and walked around the promenade at night, and it was absolutely out of control there.  They built this giant addition to the mall, all filled with high-end retail, and every spot of the old main drag had some kind of store in it, selling high-ticket items or hand-crafted clothes or super good food, and the streets were filled both with tourists dumping cash at every turn, or locals driving their fine European autos and wearing expensive clothes to go spend serious cash on drinks and dinner.  And just outside of the bustle, every little area that was vacant was currently under construction, erupting with new retail space.  It reminded me of New York, the parts of New York that were always expanding, always growing, like the quick cell growth of some mutant superhero, constantly replicating and strengthening.  Compared to our neighborhood, which is nothing but empty lots and vacant warehouses, it was astonishing.

Anyway, very far off topic here.  We also went to the Museum of Jurassic Technology, which is… interesting.  It’s a very meta art project more or less, a museum poking fun at museums, filled with exhibits of questionable verifiability.  I don’t know – it might be a little over my head, but the basic gist of it are that there are a lot of freaky exhibits, and you don’t really know what’s real and what’s completely fictitious.  The whole thing reminded me of walking around a living Tool video of some sort.  I bought a book about it, and will read and review it later, but it’s worth checking out if you’re ever in Culver City and have eight bucks to spare.

The trip was, unfortunately, over just as fast as it started.  I had to fly back Sunday morning, and Sarah dropped me off at LAX after an unprecedented drive up the 405 with no traffic whatsoever.  When we zipped past Carson, I saw the GZ-20 Spirit of America, better known as one of the three Goodyear blimps, which is always nostalgic, because I was obsessed with the Goodyear blimp when I was 5 or 6.  I got through security at the airport in record time, and got to camp out and get my day’s writing done before the flight.

And like I said, I got that bummed feeling after getting back home.  I know you’re supposed to hate LA, and all of the people are “fake” etc etc, but I really do like it there.  I now must resist the urge to go to redfin and start looking up house prices there, and try to get more work done on the next book.

Linky links for you:  go check out my new book, Thunderbird.  Like it on Amazon, add it on goodreads, help a brother out.  I’ve also been stepping up my review game on Amazon a bit.  Check out my reviews, and click that like button a few times and show some love.  Also, if you’re a writer and you’d like to swap books for review, leave a comment or drop a line at jkonrath at this site’s address and let’s set up a trade.  Thanks!