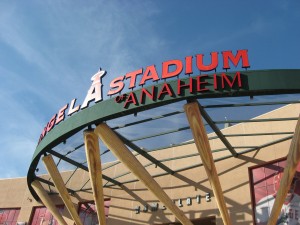 It’s Friday, and in about an hour, I’m off to OAK to catch a flight to LAX and spend a weekend celebrating my birthday.  No real plans, except for a quick trip, and probably a lot of nostalgia for the time five years ago when I lived down there.  I really do love LA, even if it’s trendy to hate it; I probably like it more than any of the other places I’ve lived, which makes it seem silly that I own a house in the dreary north part of the state, but that’s another discussion.

I was thinking about the first time I’d ever visited LA, and then realized that I wrote about it in the early days of this site, as one of my very first entries ever.  It’s funny to read it after having lived there, and it seems like it happened a million years and several lifetimes ago.  Like, I remember having to stop and fill up the car near LAX, and pulling into a neighborhood that at the time seemed like some kind of Tarantino-esque inner city gang nightmare.  Now, I realize I was probably in Hawthorne or something, which isn’t far from where I lived in 2008 and is a fairly sedate place to be.

I always divide my life into these discrete eras, like my Seattle era, or my K era when I dated her, or whatever.  And all of the eras are very compartmentalized from each other.  So it’s always interesting to me when different eras have these hyperlinks to each other, like when we visited the place where, ten eras later, I’d live.  Or another example: I lived in New York, and went to this conference in San Diego for a week, back when big companies actually paid for tech writers to go to conferences.  And one night, I drove up to LA to see a friend of mine.  And on the way, I swung through Anaheim, and stopped to eat a late lunch.  There was this McDonald’s right off the main drag by the Disney property, and it was a huge version, designed for giant lunch rushes of tourist busses dumping off scores of kids.  I remember eating there once in 1997, only because at that time, they had the McPizza, and only the highest-volume stores had the pizza, because the prep time of the pizza was longer than the holding time, so you had to move serious units to get it on the menu.  I didn’t get one, and for whatever stupid reason, went back to that specific McDonald’s in 2000 to see if I could get one, but by then, the McPizza was McHistory.

So that one visit for a Quarter Pounder meal deal knitted together at least three eras:  The Seattle/K era, the New York era, and the future 2008 living in LA era.  I did not visit the same McDonald’s in 2008, although I did go to Anaheim and see it when I went to an Angels game.  I was on Weight Watchers and off McDonald’s by then, though.

Another thing I remember from 2000: I was sitting there, reading a newspaper and picking at my fries, when this lady was mopping the floor.  It was an off hour, like maybe 2 or 3, so nobody was in the dining room but me.  This was a redneck woman, maybe someone who was working there either because it was all she could get or it was part of the terms of her parole or rehab.  And she started talking to me about the nomination of George W. Bush as the Republican candidate.  She told me “well, I’ll probably vote for him.  He probably knows the most about the job, since he already was President.”  I did not correct her.  This was the beginning of the next era.