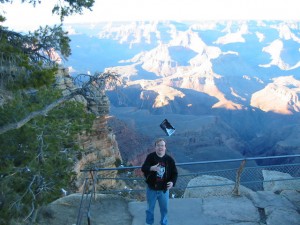 Me, throwing Rumored to Exist into the Grand Canyon on my birthday in 2003.

I’ve been going to Denny’s every year for my birthday, since I don’t know when.  I think it must have started when they used to give you free lunch for your birthday, but when I started hanging out with Bill and Scott, who both share the 1/20 birthday, they’d stopped the free meal deal, and we continued to go out of habit.  There must have been years that I didn’t do this, although it’s hard to remember when.  I think in 1994, I was deathly ill with pneumonia and didn’t go.  In 2007, I was in New York (which didn’t have Denny’s); I usually went to Vegas, but went in February that year, so I missed it.

Denny’s used to have a certain power over me, like it was a strange touchstone in my life.  I’d go there to write, scribbling in the notebooks late at night while a high-calorie breakfast for dinner congealed on the plate, lubricated with copious amounts of Coca-Cola caffeinated beverages.  I don’t know that I ever got much quality writing done there, other than journal entries bitching about the day or talking about the weirdo waitstaff and regulars.  Maybe I got some editing done, scanning over printouts of books with red pen in hand.  But it was mostly a ritual, like going to church or something.

I suppose there were enough late-night hijinks there when I was in college.  Whenever Ray was in town, that’s where we’d end up, or when me and Larry needed a place to eat at two in the morning.  Elkhart didn’t have a Denny’s, and Perkins was the 24-hour place of record.  But in Bloomington, Denny’s pulled me in.  I never went there to study, or read, but many a conversation started on a VAX computer was finished at one of the booths at that place over a cup of what purported to be coffee.

Denny’s also had a certain allure when I lived in New York because they didn’t have them. There are a thousand 24-hour diners in The Big Smear, not all of them the usual pancakes and bacon places.  There are Greek diners and places with Italian food and Falafel joints and Mexican diners and who knows what else.  (Every possible cuisine is available in New York, all cooked by Mexicans and Guatemalans in the back.  That fine Italian restaurant in Little Italy featuring the fine food they could only make in Italy?  Cooked by Guatemalans.)  But that strong association as being part of my writing culture, tempered by my time in Seattle hacking out these books over an All-American Slam, plus the grass-is-greener effect of the distance, made my pilgrimages to other cities that contained Denny’s seem that much more powerful to me.

Now, all of the old routines are dead.  I force myself to write when I write, and not when the rabbit’s foot is properly balanced next to the lucky pen and track 7 of the magic CD is playing and it’s exactly 9:12 at night.  And I don’t eat Denny’s anymore.  The healthiest thing on the menu there is like 47 weight watchers points.  And it doesn’t help that their owners are assholes.  The dream is dead.  I’ll skip Denny’s from now on.

But yeah, 42.  My head’s a mix of “you’ve got to be more than halfway through this by now” and “you need to put the past behind you and get shit done.”  I think the latter voice is what I need to listen to right now.