So I had to go to storage the other day, to put away the box from my new bass, because if I just threw it in the recycling bin, the truss rod inside the bass neck would have exploded and I would have needed to mail the thing to Germany or Uganda or something for warranty repairs, and I’m pretty sure finding a cardboard box the size of a bass would be a month-long venture.  I didn’t want to dig through the unit, although I think I can now shred any files older than 2007, and there are boxes of tax papers going back to 2000 in there, but they’re in the very back of the unit, and that would involve unpacking everything to pull those boxes, so that can be left for some other time.

What I did find though, is something that I thought was lost: a good chunk of my Star Wars action figures from the late 70s/early 80s. 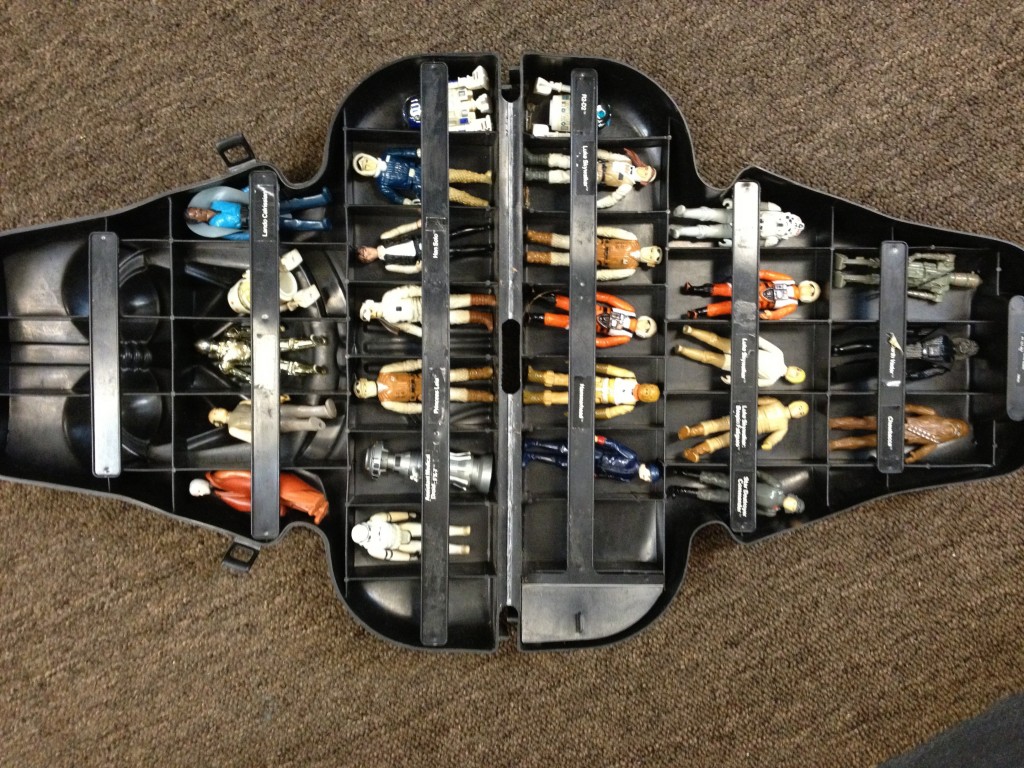 When I was a kid, Star Wars figures and Legos were the father, son, and holy spirit of my life.  I probably spent an entire year of my life in the toy aisle of K-Mart, memorizing the back cards of every action figure hanging from the displays, digging through every unit hanging from the metal pegs in hopes that some rare figure would be hidden in the very back.  (For example, at one point, the light sabers that extended from the arms of Luke, Obi-Wan, and Darth Vader were two-piece telescoping units; these were later replaced with solid one-piece units that didn’t extend as far.  All of my figures came with the later one-piece light sabers, but I was convinced that if I dug around enough, I would miraculously find a two-piece lightsabered figure at the store, which I of course never did.)

Various thoughts about these figures, in no particular order:

Amazingly, all of these survived.  My GI Joes did not – for whatever reason, they were much more susceptible to damage.  One of them lost both of his thumbs because he had this bazooka that essentially worked as a large lever to fatigue and break the little plastic digits.  So I chopped off his hands, touched up the stumps with red paint, and he became “Can’t Read Text on a Claymore Mine Joe.”  When that got boring, I hit him with some aqua-net and a cig lighter, and he briefly became “Victim of a Friendly Fire Napalm Incident Joe” and then “Cannot Identify Remains Joe.”