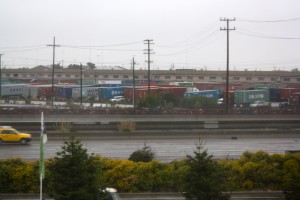 I keep looking out the window at the train yard that’s a few hundred yards away, across the highway.  You can’t tell it’s a train yard, because you just see the profile of it, and the occasional diesel locomotive tooling back and forth on the horizon.  I just looked at google maps, and it’s not really a train yard, maybe six tracks in parallel.  There’s a set of through tracks that belong to the Amtrak, the Capital Corridor line, the train that goes from Jack London square and points south, like San Jose, and connects to Emeryville and points north-northeast, like if you took the train on to Sacramento.  I think that freight trains switch off of this main thoroughfare and are broken apart, or maybe put together.  I don’t know any of the language or nomenclature involved; I’m sure there’s a railfan site that explains all of this in more detail.

I thought of this because as a little kid, I was infatuated with trains, and growing up in Elkhart, you always got stuck waiting for a hundred-car train to go by.  This became much less interesting when I actually got a driver’s license and had places to be, and a few hundred Conrail cars meant the difference between arriving before first bell or getting a tardy.  Elkhart has one of the largest freight yards in the world, although I didn’t know this at the time.  It’s dozens and dozens of tracks wide, something like 675 acres of switches and rail cars.  It’s a classification yard, which means trains are broken down into different types of cars and reassembled for long hauls across the country.  I’d heard that at one point, every rail car that went from east to west across the country or vice-versa would go through this station, which explains why we had to wait for trains so much.

You couldn’t tell this was a busy rail yard from a distance.  It ran along a highway, Lincolnway, and from the side, it looked like just a single track.  There were a few derricks or fuel hoses or whatnot, but without the magic of google maps or some info from a friend’s dad that worked there, you really couldn’t tell how big this was.  The one time I could tell something was up was during the first Gulf War, 1990, when I’d drive on that highway every day to get to classes at IUSB.  The AM General plant in Mishawaka was turning out Hummer jeeps at breakneck speeds to get out to the big war about to go down, and they’d drive them from the plant to the rail yard, to be shipped off by train to some big coastal cargo center, where they’d get put on ships or whatever and hauled out to the desert.  Every day, as I’d drive west to class, I’d see a long column of the boxy new vehicles, painted in tan camouflage, equipped with full military gear, driving East to the train station.  It looked like a scene from some Reagan-era “The Commies Have Invaded” urban combat movie.

Conrail, who once operated all of those blue and white trains, is no more.  Split in half, Norfolk Southern now operates the Elkhart yard.  The one lasting legacy is in the Elkhart water table; over the years, Conrail accidents spilled millions of gallons of toxins into the tracks, seeping into the water below.  Many houses in Elkhart still use well water, which means a series of high-profile EPA superfund shitstorms happened in the area in the 90s.  Huge plumes of trichloroethylene (TCE) and carbon tetachloride (CCl4) infected the water table, and hundreds of houses were forced to connect to the city water system.  It’s a common trope in the area: damn the regulations, damn the government oversight, get big brother out of our way so we can make money… oops.  See also the PCB-happy companies in Bloomington that all split for Mexico, taking the only high-paying, low-skill jobs in town and leaving behind toxins in the watershed.

It’s still interesting to me though, to see those boxy locomotives pushing around flatbeds.  It’s such a familiar shape, even in different colors and livery, like the toy trains I played with as a kid and the real-sized versions that blocked traffic every day in my old town.  It’s almost hypnotizing to watch them across the highway, wondering if any of the same boxcars rolled through that freightyard so far east.