I mentioned a while back that I started playing bass again.  Here’s an equipment update, since it seems like all I’ve been doing is amassing new stuff. 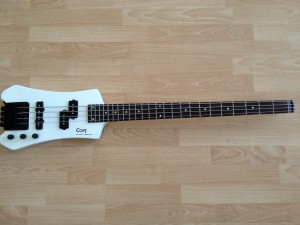 I previously wrote about my Cort bass.  It’s a Steinberger-licensed headless bass from the late 80s or early 90s, and it’s still here.  It looks okay in this picture, but that white finish looks a little yellowish, and the neck needs adjustment.  I am also not 100% with the tone, and wouldn’t mind ripping out the pickups and putting in a set of EMGs, but I have bigger fish to fry.  This one’s probably off to the shop for a setup though. 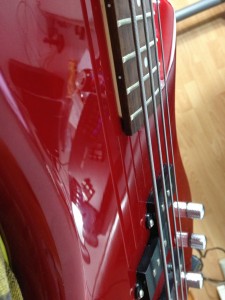 The next bass is the Ibanez, which is a GSR-190 4-string, made in 2007.  It’s been the main workhorse as of late, and I like it a lot.  It’s well-balanced, has decent tone, and a thin, fast neck, which I really appreciate.  One of the downsides compared to the Cort is that it goes out of tune every few days, just slightly.  With the Steinberger tuners, you could pretty much drop the Cort out of a plane at 40,000 feet and the tuning would still be dead on, but it also makes me wonder if I should someday swap out the tuners or something.

One change I did make: I had this coupon burning a hole in my pocket, so I ordered a set of EMG pickups, originally thinking I’d put them in the Cort, but then chickening out because there’s almost no space in its cavity for the battery and other junk, and I play the Ibanez daily.  The switch was incredibly easy; EMG now puts DIP-style connectors on all of their gear, like a PC motherboard, so you can completely wire a bass without any soldering.  The new pickups (the EMG X series) are incredibly punchy and very warm.  The best part is that they are completely silent.  My office is filled with noisy fluorescent lights and barely shielded WiFi and bluetooth and whatever else shooting energy through the air, and most musical instruments will pick up hissing and buzzing and Mexican radio stations and everything else, but the active EMG pickups are dead silent. 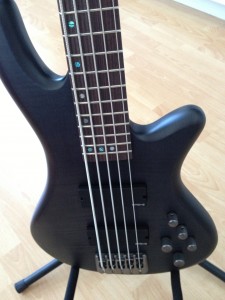 And then the new one.  Yesterday, I got a new Schecter Stiletto Studio 5. It’s a mahogany body finished in a see-through satin black finish, which is stunning, although hard to photograph.  From a distance, it looks like a stealth bomber’s paint, but up close, you can see through the wood grain underneath.  It’s a 35″ scale neck, which means it’s an inch longer than a standard bass, making the sound much more incredible.  (Think the difference between a tiny upright piano and a big concert grand.)  It’s a neck-through, for insane sustain, and it’s got passive EMG HZ pickups and an active 3-band EQ.

The one thing about this bass is that it is HEAVY.  I mean, it’s like if you carried around an M-16 all day and someone handed you an M-60 machine gun – it’s a substantial heft, but it feels really good.  I’ve got a wider strap, but I feel like I’ll need to double down on chiropractic care in the upcoming months.  It’s not horrible, but compared to the light Ibanez, it’s a big step up for me.

I’ve never played a five-string before, and this is a bit overwhelming to me. The neck isn’t substantially wider or thicker than my 4-string, but there are three things going on.  First, that extra inch of scale is fucking with me, and while I can cover the first four frets on a 34″ bass with a fret per finger, I need to change my technique here or something.  Second, I’m so used to the bottom string being the E, that I get lost and start doing shit on the wrong string.  Or even worse, my left hand is off by a string but my right one isn’t, or vice-versa.  And third, there’s all of this mental arithmetic of the different possibilities I can use to play the same notes.  It’s confusing, and will take a lot of time.

But – that low B string is absolutely sick.  Just the sound of it rattling away is awe-inspiring. I’m so used to the lowest sound a bass makes as that low E, and the B below it sounds like pure doom.  I went to Songsterr yesterday, and my first thought was to look up some Carcass songs, like off of Heartwork and Swansong, which are both albums that I think purists hate, but that over the years have really grown on me.  I started playing the song “Keep On Rotting in the Free World”, and the first time I hit the open B, I realized I made the right choice with this thing.

I was going to write more about effects, which are also rapidly multiplying here, but I think I need to go practice.  Actually, I need to do back stretches, then practice.