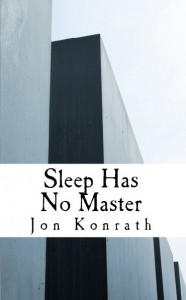 I recently found a great independent review site that focuses on bizarro lit, called Voltaire’s Reviews.  I sent in my latest, thinking it wouldn’t get to the top of the queue until next winter, and was pleasantly surprised that the reviewer plowed through it right away and posted a review.

The review is here, but I’ve posted it below, too.  It’s available in paperback and on the kindle (for only 99 cents!) here.

I think I have said at one point, “This is the strangest thing I have ever read,” and I keep saying it. Which is awesome. And this is awesome. A collection of stories that have a tiny sliver of a thread between them, but yet stand alone. If this type of thing was a complete novel, it would be very hard for me to follow along—honestly, one has to take a break from this type of thing frequently. It is very intense.

This collection is basically insane psychotic scripture, laced with prescription drugs, Colonel Sanders, and large quantities of heavy metal. In other words, it is perfect bizarro. While many of the stories have at least a modicum of what modern science would call a “plot,” others are completely random artifacts with no connection whatsoever to reality.

But hold on, beneath the total insanity is a scathing indictment of the real world. Microsoft may get the brunt of things, but there is still a theme of criticism against the institutions that have created an alternate version of reality; and, like the mindless drones we can be, many of us have been sucked into this world. Konrath reminds us that there is indeed a reality outside of Pixar, the Kardashians, and carbon-copy restaurants. It is a message that will sadly be missed by those who only purchase books and stories that are sanctioned by the aforementioned machinery, but will be appreciated by folks who tend not to take the world as presented to them by others—those of us who wish to create our own reality and our own experiences.

Within the insanity are such scathing attacks on the things that piss us off—such as getting conned at the oil change place. This has happened to me: I had recently had brand new tranny fluid put in, then popped by the quickie lube to get the oil changed, and guess what? They showed me “dirty” transmission fluid… probably not even from my car. Check out “Oil Change Introspection Therapy.” This kind of thing is enough for anyone to fall into a maddening, uncontrollable rage.

Even if you don’t like bizarro, get this anyway. Perhaps it will change your mind and offer you a new perspective in life.