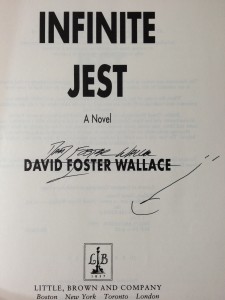 I first heard about David Foster Wallace’s Infinite Jest from the 1996 profile in Details.  (I used to subscribe to Details for some reason; I’m not sure why.)  I didn’t have a TV then, so of course I ran to the bookstore, bought the hardcover, and forced myself to read at least 50 pages a day over the next few weeks and get through the whole thing.  And I did, and it was awesome.

And now it’s 16 years later, and I’m trying to start another book, and whenever I ask myself, “what the hell do I want to write?” of course IJ is on the short list.  And I think I should re-read it.  And I bought it on the Kindle, because one of my chief complaints about the book was that at the time, I lived in a tiny 100-some square foot studio apartment with no furniture, and slept on a twin mattress on the floor, and the only way I could ergonomically handle that big chunk of dead tree was to lay on my side with the book on the floor, and completely fuck up my neck and back twisting around to look at the pages.  And of course, I have not re-read it since, because I would have to invest a month of time into it, and I can barely focus long enough to type 140 characters at once.

But I keep trying to think, what the hell do I remember from that book?  So here’s the list.  It’s probably filled with spoilers, so you’ve been warned.

And that’s it.  I do not remember anything else.  So yeah, I need to re-read it.