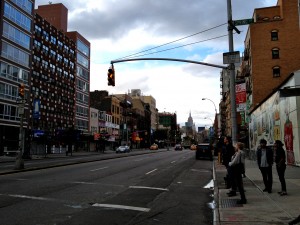 Usually when I fall into a deep nostalgic k-hole, I’m thousands of miles removed from the actual event.  But tonight, It’s more like a few hundred yards. I’m back in the Lower East Side, in a hotel room that’s a matter of blocks from my last home on the east coast.

I’m here for a work thing, and don’t have much time to dawdle, but staying in my old neighborhood and working in my old work building (albeit in an office on a different floor) means I’m tripping over threads back to my past constantly. I mean, the hotel I’m staying in is this hipster thing that doesn’t even look like a hotel on the street, the kind of place with a shower with the outer wall being all windows and a square sink and a toilet that’s a high-gloss black and bathroom walls that look like a zen retreat.  I don’t think it existed when I left, or maybe it was just steel beams and scaffolding, one of the million construction projects I ignored on a daily basis.  But when I go downstairs and walk outside, I’m back on the old Ludlow Street I used to traverse on a regular basis, looking at the Wholesale Candy, the Delancey McDonald’s, the Tenement Museum.

(What’s funny, and another strange irony, is that this hotel sits caddy-corner from the cover of the Beastie Boys album Paul’s Boutique, an album that’s been on more than a few minds lately.)

I left New York in 2007 like the American Embassy workers left South Vietnam in 1975.  After my eight year run here, I was so eager to get the fuck out of dodge.  Sarah had a job in Denver, and we went out there and bought a brand new car and got a brand new apartment and then flew back here for goodbyes and the final orchestration of getting all of our furniture into boxes and moving trucks.  I never thought I’d return to New York, let alone miss it.  And I wouldn’t say I miss it, but it’s not something to completely dismiss, either.

I’d lived in the Lower East Side since 2005, but the exact date’s hard to pin down.  I mean, I had my shithole apartment in Astoria when I met Sarah, the place with bedbugs and a collapsed bathroom ceiling and a heater that only worked well in July.  She had this huge two-bedroom place in a high-rise co-op, a building with a doorman and a balcony and a wall of windows that looked north and air conditioning.  So the occasional nights of extracurricular activities became consecutive nights, especially during the summer of 2005, and then bags of stuff went from one place to another, and by fall, I was all in.

I had a lot of fond memories of living in the neighborhood back then.  We knew our time was up in the city and talked about some west coast escape plan almost from the beginning, but part of the deal was that we’d see as much as we could before we ditched the city.  I’ll never feel like I scratched the surface of this city, especially since restaurants are like cockroaches here: every one you see means another dozen you don’t, and they’re continually dying off and being replaced.  And I wasn’t entirely happy with my work situation at that point, but I could now walk home after each day.  And after a long day of hacking at TPS reports, spending ten or fifteen minutes of strolling through Chinatown with some good music in the headphones usually meant I’d show up at the front door without any worries anymore.  While my house in Astoria was more like a constant hostage negotiation situation, the apartment in the co-op was a nice oasis in the city, a comfortable place to crash and look out at the green grass of the park four stories below us.

Now, being back here is a total mindfuck.  I walked to the office tonight, just to see the sights, and then met up with one of my California coworkers for some dinner.  We went to Spring Street Natural, one of my old favorites, and then wandered up to Times Square to descend right into the belly of the beast.  It’s always interesting for me to look at the city and see how things have changed.  The big chunks are still there, and it’s always good to see when something’s survived.  But it’s also fascinating to see what’s transformed.  The big Virgin Megastore where I used to spend hours shopping for DVDs is now a Forever 21 clothing store.  The Tower Records where I’d dump endless money into CDs is now the MLB Fan Cave.  Name a random failed business and it’s either a Duane Reade, Chipotle, or a bank.  K-Mart is still a K-Mart.  The Howard Johnson’s where I ran up a $1200 bar tab one night on a first date is now a Sunglasses Hut.  It’s all changed, but it’s the same city.

So, after a ride on the N train back to SoHo, heavy flashbacks and rumination of 2006.  It’s not that I want to return; I’m sure on Wednesday afternoon, I will be ready to get the fuck out of here again.  But it’s like seeing your old neighborhood on TV, or in the movies.  I remember when we first got to Denver, a few weeks later, when we were at the movies and saw our old home of New York for the first time, at a distance.  It reminds me of that, except I’m here, in it, jay-walking and cursing at tourists who block the sidewalk like I never left.  I’m living in the hallucination, albeit briefly.  It’s a strange feeling.

I lived in LA for six months in 2008 and really loved it, pretty much more than any other place I lived. But it is huge, and all of the areas are very different. I worked from home and didn't have to deal with the traffic, and we lived in Playa Del Rey, which is pretty quiet, near the water, and not too expensive. It's not near Hollywood though – it's like a different world than there.