I did something the other day I haven’t done since July of 09.  I rode my bike.  Not a lot, maybe a mile or so around the neighborhood, a quick shakedown cruise after wiping off three years of junk from the frame and hitting the chain with some oil.  I’ve been away from the little Dahon because my last bike ride resulted in a broken arm.  And of course, we managed to close on our house a couple of days later, which meant I got to sign my name 40,000 times with a broken arm, which I’d recommend about as much as spending six or seven hours in the Oakland hospital ER.

Anyway, the bike ride is part of the latest attempt to get my shit straight with fitness.  After this latest health scare that wasn’t, I took stock in my situation, and things have been slowly slacking off since I started working from home, and the numbers at the scale have been getting progressively worse.  I haven’t had to run out and buy elastic-band maternity pants, but my absolute lowest weight during Weight Watchers was 168 at the start of 2009, and I’m currently sitting at 183.  Compared to the 250 or so I was at back in New York, that’s still not bad, but I wouldn’t mind getting back into the 170s. 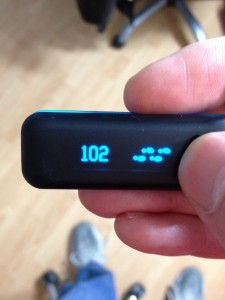 So part of this new quest has been getting a Fitbit, which is a tiny little thing you clip on your belt or pocket.  It has an accelerometer in it, and works as a pedometer, recording every step you take, as well as recording how many flights of stairs you climb.  This info is beamed back to your computer wirelessly, and then back up to the mothership, where a freaky web 2.0 site enables you to track other stuff, like food, exercise, and all that jazz.  You can also wear the tracker to bed and it will record your sleep time and efficiency, graphing the number of times the cats wake me up in the middle of the night.  If this thing also tracked the number of words I wrote and the amount of money I spent every day at Amazon, it would pretty much be a total solution.

The fitbit solution is interesting, because it quantifies everything.  The only reason I ever went from 250 to 170 was from being held accountable for every piece of food I shove in my piehole, but when you make something very quantitative, it’s easier for the geek in me to deal with the whole thing.  It’s like sitting at a Jira bug tracker and seeing the number of defects that have to be resolved before a ship date, and not just some vague emotional conquest that may or may not be working.  Fitbit also heavily gamifies the whole thing, awarding badges for passing certain goals, and enabling you to add friends and compete with others.

The first thing I learned is that I walk a pathetic amount during the average work day.  The arbitrary goal is 10,000 steps a day, and unless I do anything out of the ordinary, I’ll average around a thousand.  Add in a trip to the grocery store, some trips to the dumpster, and another errand or two, and that goes up a couple of thousand. But I’m not burning enough, and I’ve been making more of an effort to get off my ass and go walking after lunch or after work.

The other thing is that my eating has drifted heavily from the WW regimen, and I need to get that shit straight.  One of the neat things about the Fitbit is that if you’re entering your food, it’s keeping track of your calories in and calories out.  So you can set a goal of how many more calories you want to burn than consume, and at any given point in the day, you can see if you’re eating too much and need to run around the block a few times, or if you’re starving yourself and you need to go eat something.

I’m trying to heavily change what I eat, not eating processed stuff and eating smaller meals through the day.  I work ten feet from my kitchen, so I don’t have any excuses about the inability to prep food.  The hard part right now is retraining myself to know what I can eat and what I can’t.  I went through this before, because left to my own devices, I’ll just eat ten thousand calories of carbs and fat, and I know that the one thing that keeps me mentally together is protein consumption through the day.  So there’s a learning curve on figuring out the routine.

Oh shit, I just found out you can track ANYTHING on this site, and add your own custom trackers.  So I just added one for writing, to track words written a day.  This should be interesting.