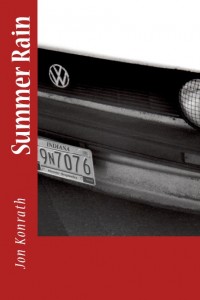 So I spend all week editing a book that’s set in Indiana University, and my news feeds explode with news about IU basketball. Weird how that works sometimes.

Anyway, I’m proud to announce that my first book, Summer Rain, is now available in a new edition on the Kindle, and will soon be available in print on Createspace.

This is a new third edition of the book, which contains some very light edits to correct minor typos.  There was also one change in book three involving Bloomington street directions that nobody ever caught, but now the ordering of streets when driving from Mitchell and Atwater to Colonial Crest is correct.  (Sorry, OCD.)

For those who have never heard of this before, my first book is a fictional account of a summer I spent in Bloomington, Indiana in 1992.  Bloomington is one of those midwestern college towns that normally has something like 40,000 students, and overnight in May, it becomes a beautiful little ghost town of nothing but townies and people stuck in summer school.  This was the point in my life when I didn’t know what the hell I was doing, and was about to flunk out of school.  I was dead broke, just got dumped, dealing with some heavy depression issues, and doing my fair share of self-medicating with barley and hops-based compounds.  I was also deep in the world of underground death metal, writing letters to obscure bands in Sweden and Japan, trying to publish a zine, and DJing a late-night show that nobody listened to.  And this was the apex of the internet, the beginning of the explosion of technology that’s making it possible for you to read this crap.  I worked with computers, these giant VAX mainframes, and ancient Macs and PCs.  So I spent a summer trying to figure out what the hell to do with life, if I could ever make money on music or if I should pursue this computer thing, and of course always trying to figure out love and romance and sex and friendships and everything else that constantly burns at a 21-year-old’s brain.

This book is huge – 710 pages in print form.  When I first self-published it in 2000, the cheapest I could price it was $29.99, and I made almost zero money on it.  But it wasn’t about the money – I just wanted to do this as a tribute to all the people who knew me back in 1992, and to those who grew up in that era, slumming it on college campuses and hacking away at C and Pascal programs in the days before the web.  So now I’m very excited that I can avoid the dead trees and make this available for only $2.99.  This isn’t the kind of writing I do anymore – it’s very much “straight” literature, and a labor of love.  But I have a lot of fond memories of that era, and of putting this thing together.

And if you do like killing trees, the CreateSpace edition will be out soon.  It will be $15.99, which isn’t three bucks, but it’s cheaper than $30.  The book’s a huge chunk of wood, and you can’t get around the pricing situation on a 710-page book, but CreateSpace did make it considerably cheaper, for the same quality book.  And I finally get to ditch that godawful cover on the first edition.

A lot of people helped me with the book, and there is now a thanks page listing them.  Thanks to everyone listed, and if I forgot you, please tell me and I’ll update it.

Okay, here’s the link to go get it on amazon.  Thanks to everyone who has checked it out!

[Easter egg that nobody’s ever mentioned, probably because only three people bought this: the car on the cover has an Indiana front plate. Indiana doesn’t have front plates, or at least they didn’t in 1992.]