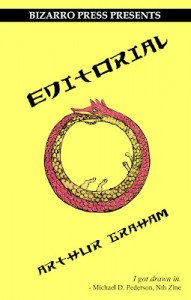 I’m sick of plot. I mean, I’m sick of the unshakeable, so-called undeniable truth that books have to have three acts, a hero’s journey, twelve points, three trials, or whatever the hell archaic structure every hack writer regurgitating genre fiction on the kindle tells you that you must have in order to sell books. Maybe you do have to make something a blatant rip-off of the same exact script mainstream Hollywood has been green-lighting for the last two or three decades in order to sell millions of copies to bored housewives in flyover states, but that doesn’t mean it’s what I personally want to read.

That’s why Arthur Graham’s latest, Editorial, interested me. This novella, recently re-released by Bizarro Press, doesn’t follow the template of every vampire romance thriller the make-money-fast crowd is hawking online. It’s a clever bit of meta-fiction, which starts with a collection of vignettes that are seemingly unrelated: a narrator talking about his days as an orphaned youth, a drifter with a Kafka-esque phase shift into a snake, a world 470 years in the future where global cooling has shrunk the seas and made formerly underwater areas the new waterfront property. There’s also the metafictional appearance of an editor, working on his own science fiction story, which is (or isn’t?) the story you’re actually reading.

It’s admittedly hard to focus while in the first dozen or two pages of Editorial, as I found myself thinking, “where is all of this going?” But the stories start to bleed into each other, in an almost dream-like fashion. I then realized that each story was a ring, and as you passed through the first circle, that ring contracted, telling you just a bit more truth about the interconnectedness of the different pieces.

In my previous failed career as a computer scientist (damn you, Calculus II!) my algorithms classes talked greatly about the concept of recursion, or the repeating of items in a self-similar way. For example, when given a huge list of numbers to sort, us humans like to iterate through the list, start at the beginning and go through it in a linear way, comparing numbers and switching items. That might make sense to us, but it’s an incredibly inefficient way of doing things. Instead, you could define a procedure that compares the first item in the list to the rest of the list, passed into the same procedure. That means that the list minus the first item is sorted the same way, which involves taking its first item out, and sorting the rest with the same procedure, and so on. Eventually, you reach a point where you have just one item, and the base case comparison is obvious, and then you blast through this huge stack of partially completed sub-steps until everything is solved.

Editorial works in the same way. It’s asking the eternal question of what is truth and what is real, but the first half of the book involves a lot of busy-work in setting up all of these self-referential calls. (And I by no means am saying the writing is sub-par or ineffective; there’s a good deal of sharp prose and character building contained throughout.) But once you get past the halfway point, you start to hit the essential truths, the point where those recursive calls hit their base cases and make you start saying “yes! exactly!”

The book also contains a lot of reptilian imagery, characters turning into snakes, or really being snakes, which at first seemed like a curious choice. But there’s this constant return to Ouroboros, the serpent eating its own tail, which you see prominently on the book’s cover. It’s the same as these concentric, ever-constricting pieces within the book, the archetypal representation in Jungian psychiatry of the human psyche. Since Plato, different mythologies use this idea of a snake eating its tail as the central force in the creation of life. Editorial struggles with the basic idea of if this character is alive or being created by the editor. It’s ultimately the same question we’ve always been asking.

Writing style? I’ve seen other reviews throw around mention of Vonnegut, and the book contains little scribbles and drawings similar to what V used in Breakfast of Champions.  It reminded me a bit more of Slaughterhouse-Five, probably because of the unconventional plot.  It goes blue a bit, which is fine by me, but if you’re the type who attends regular book burnings, you might not be cool with a dude who was once a snake hooking up with another dude at a truck stop, so be forewarned.

Editorial isn’t an easy read. I mean, it’s not Ulysses, but it isn’t Twilight, either. It’s a challenge, but a rewarding one, and my only regret is that I have so much difficulty finding this type of book amongst the seas of detective murder mysteries and YA romance stories.  Anyway, check this one out.  It’s available in print and on the kindle.  Also stop by Arthur’s web site at http://arthurgraham.blogspot.com/ and give him a holler on facebook, too.

Awesome review! And ya, Twilight SUCKS!

What greater compliment could I give you here than saying that this made me want to immediately read Editorial?