I know I said I don’t do new year resolutions, and I don’t.  But one of the things I’ve been trying to do – it’s more of a course-correction for my post-40 memory loss – is writing down every damn thing that pops in my head, with hopes of later mining this stuff for story ideas.  I know it’s something I should have started doing decades ago, but it’s something I’ve been trying to be militant about.

I just read this book,Weinberg on Writing, which talks about his “fieldstone” method.  The analogy has to do with those fieldstone walls you see on old farms.  (Watch the last five minutes of Shawshank next time it’s on TBS; they run it pretty much daily.  There’s a nice fieldstone wall in that.)  When a farmer builds one of those walls, they don’t go to Wally World and say “gimme a thousand yards of stones.”  They plow the fields, and when they hit a big stone, they pull it aside and save it.  After years of doing this, you have enough stones to build some fencing, or a nice fireplace hearth or wellhouse.  It takes time to find the right stones to fit the odd cracks and holes, but if you’re always looking, you never know when you’ll find it.

Most of the art of writing has to do with dragging your subconscious mind into your conscious mind and then dumping it onto pages in a way that can transfer into someone else’s conscious mind and creep into their subconsciousness.  Anyone that tells you it’s about marketing or the three-act structure or hitting plot points or what your cover looks like is full of bullshit.  That’s about selling books.  Salvador Dali wasn’t a genius because he painted the crying clowns and prairie field landscapes that he knew would sell; he was a genius because he would have fucked up dreams and then immediately paint them with no censorship or conscious thought, and those paintings haunt you and are hard to shake because they drill into the bottom of your mind.

The problem is, you can’t sit at a blank page and consciously think, “okay, let’s dump my unconscious mind into this buffer.”  You just see fits and spurts of what you need: while you’re in the shower, when you’re cleaning up cat shit, when you’re stuck in an endless meeting.  Something pops into your head, and it would be awesome in a story.  And then, if you’re above 40 and have spent your lifetime drinking from aluminum cans, it’s gone in ten seconds.

This requires some way to always capture this shit.  The current strategy is a three-pronged approach:

1) The iPhone notes program.  It’s pretty easy to use; it syncs up with IMAP in my gmail account, so I can also get at it from my Mac or my iPad, making cut/paste pretty easy.  The downside is typing with my thumbs, and it’s not always easy to whip out a phone and tap away.

2) A google docs document that does the same as above.  I use this less and less, but there are times where I’m not at any of the above three iOS machines, or where I need to cut/paste in something sizable, like a big chunk of an article.

3) A moleskine notebook.  The classic, hardcover, lined.  I’ve got a little folding pen that bungees right into the elastic cord, and it stays in my jacket pocket or bag at all times. 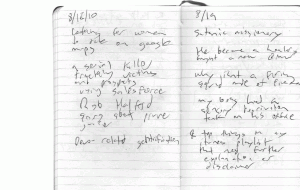 There’s a certain tactile satisfaction to keeping notes in a moleskine; that’s a huge plus.  And there’s an overwhelming joy in filling up one of these leather-bound pocketbooks, like you’ve accomplished something more than just dumping ASCII into a buffer.  I just finished one of the books, and it took me almost two years, just because I write in fits and spurts, and this “capture everything” movement just got into gear.

Now here’s the real problem with the moleskine: how to move these fieldstones into the production line.  The iPhone notes thing is easy: Ctrl-C, Ctrl-V.  The notebooks – well, first my handwriting is horrible.  And I barely hit the lines to get all of this stuff parallel to each other so OCR can handle it.  And I can’t ship it off to someone and have them transcribe it, since I can barely read it.

The current workflow is to scan the entire thing in as a single PDF using Preview and my printer/scanner.  This take some work, only because you end up with a 50-meg file, and there’s no way you’ll do a hundred scans without Preview crashing at least five or six times.  (I know, Windoze people are like “ha, it doesn’t just work”.  But I was able to use a piece of software that came on my system for free, without spending 19 days researching what third-party program works with my brand of scanner, brand of USB chipset, version of Windows, brand of USB cord, IRQ settings, motherboard configuration, and then find out the software I paid fifty bucks for is a “lite” version and the “pro” version costs $999.)

Then, I split the PDF into a hundred or so PNG images.  I have a Scrivener project that’s just a dumping ground for all of my fieldstones, failed stories and books that still have some reusable bits, and whatever else.  So I create a folder for the book, and dump the PNGs onto a file in the binder, then split that up into a bunch of files, and either type in the bits of each page, or ignore them.  (Sometimes a page will just be a partial grocery or todo list, or something I’ve already used, so not everything is gold.)

The process of turning these fieldstones into working stories and books – that’s another project, and a workflow I haven’t mastered yet.  But a lot of The Earworm Inception  came from fieldstones that were grouped and fleshed out, and this next book is using a lot of stuff collected like this.  Some of them will be duds; some just become a single line in someone’s dialogue, or a little aside.  And some will be the nucleus of an entire work.

So I’m having fun, transcribing this stuff, finding little gems.  And I’ve got the next Moleskine up and running, ready to capture whatever happens in the back of my head during my TPS report filing during the day.

3 replies on “Fieldstones and Moleskines”

Your described method for dealing with the "fieldstones" seems like ten times more work then simply looking through the book and typing anything that isn't a "dud."

And, not to defend Windows, but it really is less horrible now. No IRQ nightmares in recent years, at least, and OCR software came with my scanner, although I don't think that I've ever used it (the OCR software, I mean – I use the scanner almost daily), so it might be worthless.

I don't type in things that have absolutely no value, are repeated, or that I've already used. I'm finding that about 80% of what's in the book is worthwhile. Also the process of typing them in is somewhat generative, because I'll have a sentence I wrote six months ago, and it causes me to write another sentence or two. All told, the process of scanning and typing in a 200-page moleskine takes me a couple of hours. I think without the scanning, I'd have the nightmare of having to hold the book open with one hand , having it snap shut during writing, the ergo nightmare of going back and forth between book and screen, etc. It's way faster to have the PNGs on screen and type.

Scanners – you lost me at "software that came with my scanner." I've never seen, for both Windows and Mac, a piece of software that came with a piece of hardware that wasn't a total piece of shit. I use the same scanner with both my Mac and my work PC (Win7 ThinkPad) and on the PC, I had to install Epson's garbage, which of course wants to put some retard thing in my task bar that pops up every other day to tell me it has to install new updates, which are probably just ads for Epson ink cartridges that will eat up 17% of my CPU for no reason. (I didn't have PhotoShop then – I'm sure you can scan from that. And no problems with bloaty programs running in the background to bug the fuck out of you to install needless updates, right?)

I found out Acrobat Pro kinda-sorta does OCR. It will add "searchable" text or whatever they call it, and then if you save-as to word, you have a text document. But you've seen my handwriting – the entire fucking notebook looked like someone picked up the other phone when you're using a dial-up modem. (Or you're using it with any phone line in Elkhart.)

For the last decade or so I've been using those marbled composition books, the green ones with grid ruling, but this last one is so chewed-up already that I'm grudgingly lined up something more durable for the next one. I like grids rather than lines because sometimes I draw in there, and the dot grid is best because I just like dots, generally. I also want the thing to be big and solid enough to last for a while, but small enough to fit into the smallest bag I regularly carry. The composition books are too big, but just barely, which is why the last few have been so physically mangled.

And I do exactly what Ray says: read through them now and then, type up bits that seem useful. (What's "useful" changes over time. Every so often I'll re-read an old book and find stuff I missed on the previous round.) I maintain a bunch of google docs for various kinds of snippage.