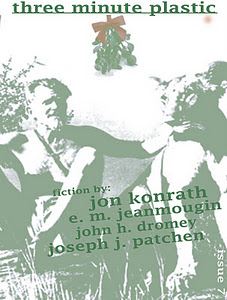 Happy Firestorm!  (Or whatever holiday you celebrate in December.)  I had a Firestorm miracle this week.  I wanted to lose a few pounds before the holidays, and I caught the stomach flu.  I lost four pounds in two days!

I have a new piece of flash fiction in issue 7 of Three Minute Plastic, A Journal of Dark Humor and the Truly Bizarre: The Machine. Yes, Giants fans and enemies, it has to do with that dork with the beard.  It’s 400 words and it’s free, so click it, read it, do it.  And while you’re there, check out the bits by E. M. Jeanmougin, John H. Dromey, and Joseph J. Patchen.

I also recently posted a piece, Art Garfunkel is My Copilot, over at The New Absurdist.  There’s some interesting stuff going on over there, although most of it is from this surrealist writer from China who makes daily posts about sales on imitation handbags.  Must be some parody of consumer culture.

On the subject of free, I didn’t do as much as I wanted in 2011, but you can go read With Sleep, All Things Are Possible at Weirdyear.  And there’s an excerpt of Rumored to Exist over at Indie Books List.  I have a couple of other pieces that will show up in early 2012, and my new year’s resolution is to get off my ass and submit as much as possible next year, so stay tuned.

As far as the premium (i.e not free) content, a couple of new things went out this year:

So if you got that new Kindle Fire for Firestorm (or some other holiday), point it in that direction and get some great stuff for cheap.  Thanks!